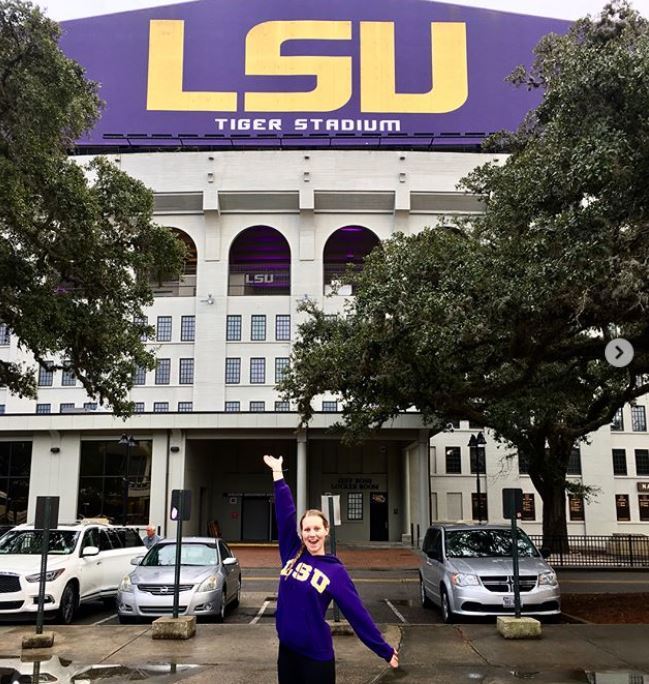 The Tigers won by a score of 189-111, claiming victory in 12 of the 16 events. Stock photo via Summer Stanfield

The LSU Tigers hosted the Tulane Green Wave women’s team for a dual at the LSU Natatorium in Baton Rouge today. The Tigers won by a score of 189-111, claiming victory in 12 of the 16 events.

LSU got the ball rolling early, taking the 200 medley relay with a time of 1:42.75, beating out the Tulane A relay (1:43.37) by a little over half a second. Katarina Milutinovich led the squad off with a 27.77 on backstroke, and was followed by Emilie Boll with a 28.67 breast split. The splits were messed up on the last two 50s, however Hannah Bellina on fly and Olivia Taylor on free combined for a 46.31 on the final 100. Tulane had gotten out to a significant early lead on the relay, with Danielle Titus leading off in 26.08 and Kate McDonald posting a 28.71 on breast, leaving the Green Wave with a 1.65 second lead at the 100 mark.

BATON ROUGE – The LSU Women’s Swimming and Diving team defeated Tulane by a final score of 189-111 on Monday morning from inside the LSU Natatorium. The Tiger swimmers will be back in action on January 8 as they will head to Tallahassee, Florida to take on the Florida State Seminoles. The Tiger divers will be back in action on December 16 as they will take part in the Auburn Diving Invitational.

The Tigers had firm control of the meet from the beginning, winning 10 total events on the day. The meet began with the team of Katarina Milutinovich, Emilie Boll, Hannah Bellina, and Olivia Taylor winning the 200-Yard Medley Relay with a time of 1:42.75.

To end the meet, the team of Milutinovich, Taylor, Sarah Grace Thompson, and Kit Hanley won the 400-Yard Freestyle Relay with a time of 3:26.20.

Montserrat Gutierrez Lavenant won the One-Meter Springboard for the second time in her young career with a score of 319.95. Anne Tuxen and Helle Tuxen finished in second and third place with scores of 286.76 and 272.55.