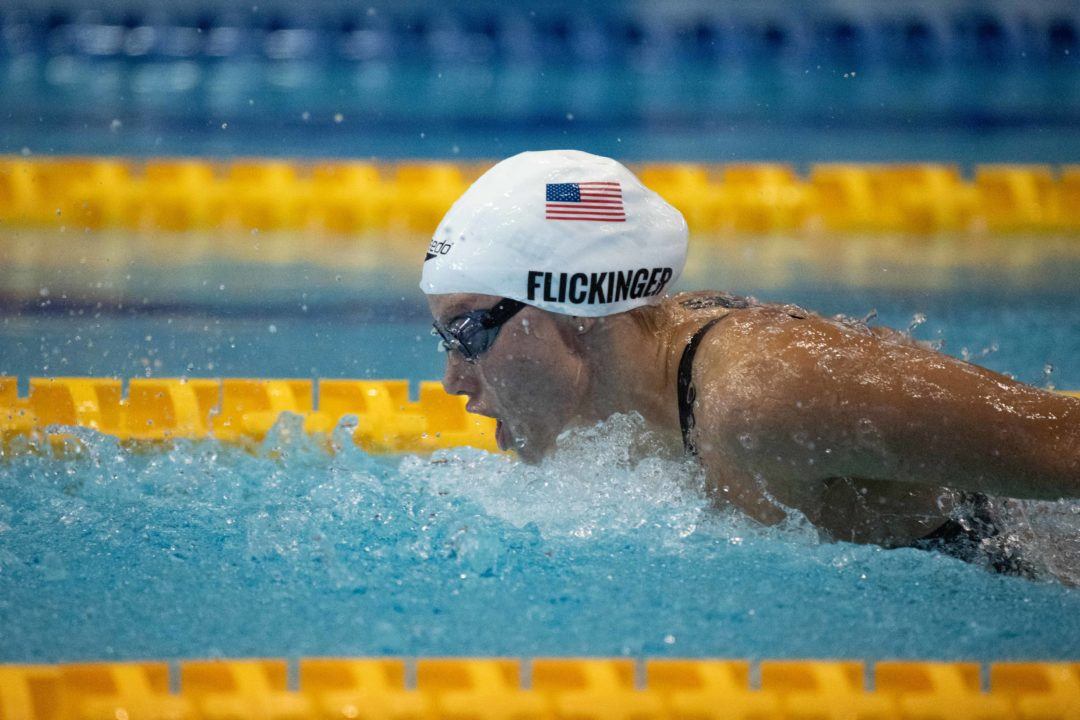 Fresh off an ISL title with the Cali Condors, Hali Flickinger went 2:09.02 in the 200 long course meter fly to check in at #2 among U.S. women this season. Archive photo via Mike Lewis/Ola Vista Photography

Fresh off an ISL title with the Cali Condors, Hali Flickinger went 2:09.02 in the 200 long course meter fly to check in at #2 among American women this season.

Flickinger swam in Arizona at the 2020 AZ Sun December Meet. The former Georgia Bulldog is now attached to the professional group training out of Arizona State. She represents Sun Devil Swimming.

Flickinger is the 2018 Pan Pacs gold medalist in the 200 fly and the 2019 World Champs silver medalist. She’s a very strong contender for the U.S. Olympic team, and could be in the hunt for her first Olympic medal after placing 7th in the 200 fly at the 2016 Olympics.

Her 2:09.02 sits #2 nationwide for this season, behind only Regan Smith (2:08.61). Flickinger hit the time in a battle with current Arizona State collegiate swimmer Lindsay Looney, who finished in 2:11.20 and sits 5th among American women this season.

That was one of a couple really good showdowns. In the women’s 200 free, current Sun Devil college swimmer Emma Nordin touched out 2012 Olympic champ Allison Schmitt, 1:59.36 to 1:59.42. Nordin moves to #3 among American women this season and Schmitt checks in at #4.

Coming off of an Olympic redshirt year, Grant House looked very solid. House was 53.41 to win the 100 fly and 22.75 to win the 50 free. Both were lifetime-bests, with House dropping about eight-tenths of a second in the free and three-tenths in the fly. The fly was a touchout of teammate Cody Bybee (53.48).

Flickinger goes 2:09 in her sleep

Where and when are tryouts for team