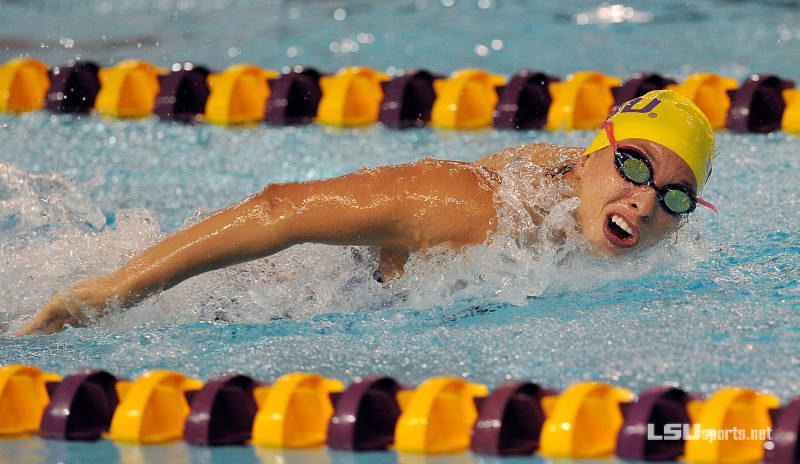 The ladies of Louisiana State University held on to win the SMU Classic by 18 points over the Louisville Cardinals, keyed by a big win from its medley relay team. Archive photo via Steve Franz/LSUSports.net

The Virginia women beat Cal by 20 points in the first-ever dual meet between the two teams. The teams will compete in non-traditional events on October 16.

With a potential to make an immediate impact on Southern Methodist’s 200 and 400 medley relay, Ryan Nordheim will arrive on campus in the fall of 2022.

The ladies of Louisiana State University held on to win the SMU Classic by 18 points over the Louisville Cardinals, keyed by a big win from its medley relay team.

LSU led the meet by 7.5 points after Friday night, and put together consistent day 2 finishes to increase that lead just a bit by the conclusion of things Saturday night.

The SMU Classic is a unique format meet that brings in 6 different NCAA programs each year. Each team brings a sparse roster of just 9 swimmers, and enters two athletes per event, one into the A heat and one in the B heat. This year’s meet included LSU, Louisville, USC, SMU, NC State and the University of Miami.

The 200 medley relay team of Caley Oquist, Colleen O’Neil, Amber Carter and Leah Troskot earned a narrow victory to open the session, the only A heat win LSU would need to claim the team title. The Tigers went 1:39.17 to get in just two tenths ahead of the host SMU Mustangs. That was courtesy of two really good legs from Oquist (24.9 on backstroke) and Carter (23.5 on butterfly).

SMU’s Rachel Nicol won a great battle with Louisville Cardinal Andee Cottrell in the 200 breast, going 2:10.11 to Cottrell’s 2:10.93. Those times would have led the nation had Minnesota’s Kierra Smith not gone 2:09.49 Friday night against Wisconsin. SMU swept the heats in this race, with Tara-Lynn Nicholas winning the B final with a 2:13.40.

Miami continued to crush diving, with Thea Vock taking her second win of the weekend. She scored 336.65 with LSU’s Alex Bettridge second.

Louisville star Kelsi Worrel paced the 100 free, blasting a 49.12 that checks in at #2 in the nation so far. LSU once again took second, though, and continued to add to their points total by winning the B final. Amber Carter was the runner-up in 49.60, while Leah Troskot went 50.34 to win the B heat.

USC got its second win of the night on Jasmine Tosky’s breakout swim, a 1:55.59 that rises to the top of the national rankings, as so many swims here did. Louisville’s Tanja Kylliainen was second at 1:57.34, just beating out Kara Kopcso of LSU (1:57.46). USC swept the two heats with Chelsea Chenault winning the B flight at 1:57.82.

And that wasn’t it for Kylliainen. The Finnish national record-holder came back to win the very next event, going 1:59.48 in the 200 IM. Once again LSU finished highly, with Sophie Weber going 2:00.83 for second place. Louisville’s Erica Belcher won the B final to give Louisville the two fastest times overall – she went 2:00.77, and USC’s Kendyl Stewart was the Trojans’ fastest swimmer overall from that B heat, going 2:00.85.

LSU and SMU led early, with leadoff swimmers Arcila and Amber Carter splitting 22.7s. USC roared back over the next two legs, though, as Jasmine Tosky (22.7) and Chelsea Chenault (22.8) flew through their legs, while NC State clawed back into contention on Ashlyn Koletic‘s 22.8 third split.

But it was Southern Methodist and Southern Cal that pulled away on the anchor legs, with Lindborg and Evan Swenson each splitting 22.4s and SMU’s slight lead holding up despite Swenson being .01 faster on her split.