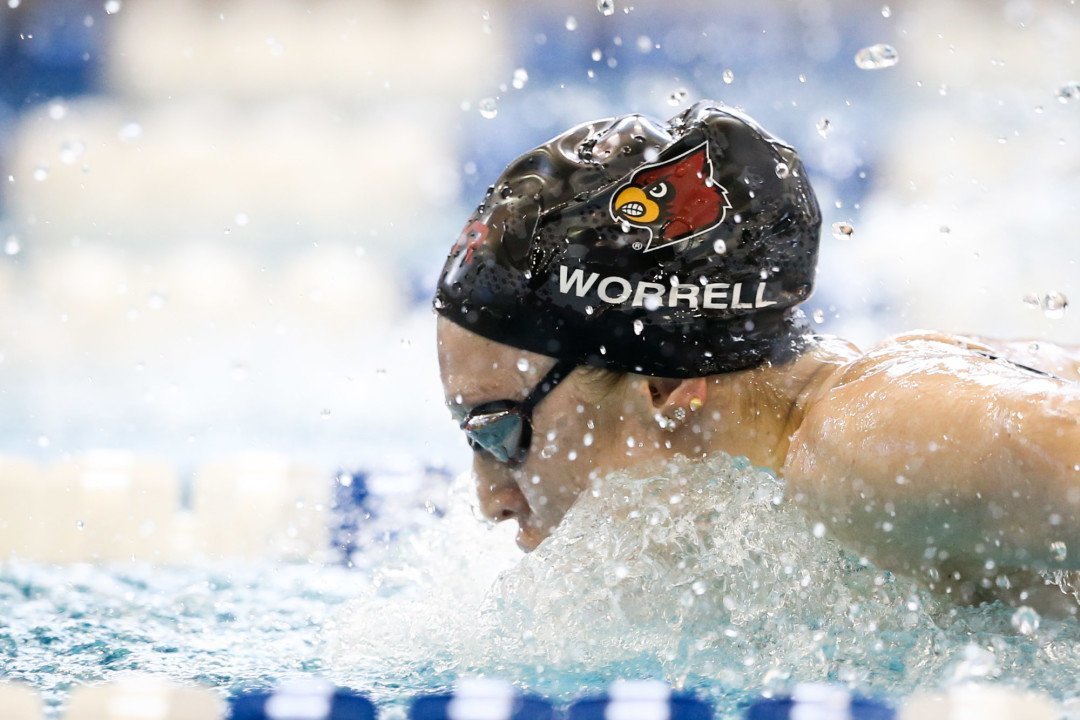 Kelsi Worrell, the American record-holder in the 100 fly, will compete at the 2016 French Elite National Championships at the end of the month. Current photo via Tim Binning/TheSwimPictures.com

In an interview Worrell said that, at the conclusion of her final NCAA Division I Women’s Championship meet, in which she has already lowered her own American record in the 100 fly and swum the second-fastest 200 fly in history, she is off to Montpellier, France to compete in the 2016 FFN Elite Nationals.

Worrell will head to Montpellier with her boyfriend, French breaststroker Thomas Dahlia, who is trying to make France’s team for the 2016 Olympic Games in Rio. Dahlia graduated from University of Louisville in 2015 and is currently the social media intern for Louisville Swimming and Diving.

The French selection meet is being run as an “Open” with some restrictions: athletes registered with foreign delegations may compete, but only one will be allowed to swim in championship finals and in the top 8 of events with timed finals. However, no foreign athletes will be permitted to compete in the “A” finals of the 100 free and 200 free because these events will be used to select members of France’s relay teams for Rio.

French Elite Nationals will take place from Tuesday, March 29 through Sunday, April 3, 2016 in Montpellier. The French Federation tightened their qualifying standards for selection to the Rio squad in September, 2015. (You can see the times here.)

Psych sheets will be available on Saturday, March 26.

After listening to Kelsi in interview, I had understood she would go to France to support Thomas Dahlia who will try to qualify in the 200 breast.
But I didn’t know she would compete there. Cool.
Interesting to see if she will be able to hold her NCAA taper until that meet which starts in 1 1/2 weeks.
And as she will probably easily win the 100 fly final, she will be interviewed on French TV. I can’t wait to see her speak French. She has no excuse with a French boyfriend. 🙂

I’m not sure it would be wise for Kelsi to attempt to hold her taper another one and a half weeks given that trials are three months away. Better to use that bloc to maximize her prep for this summer.