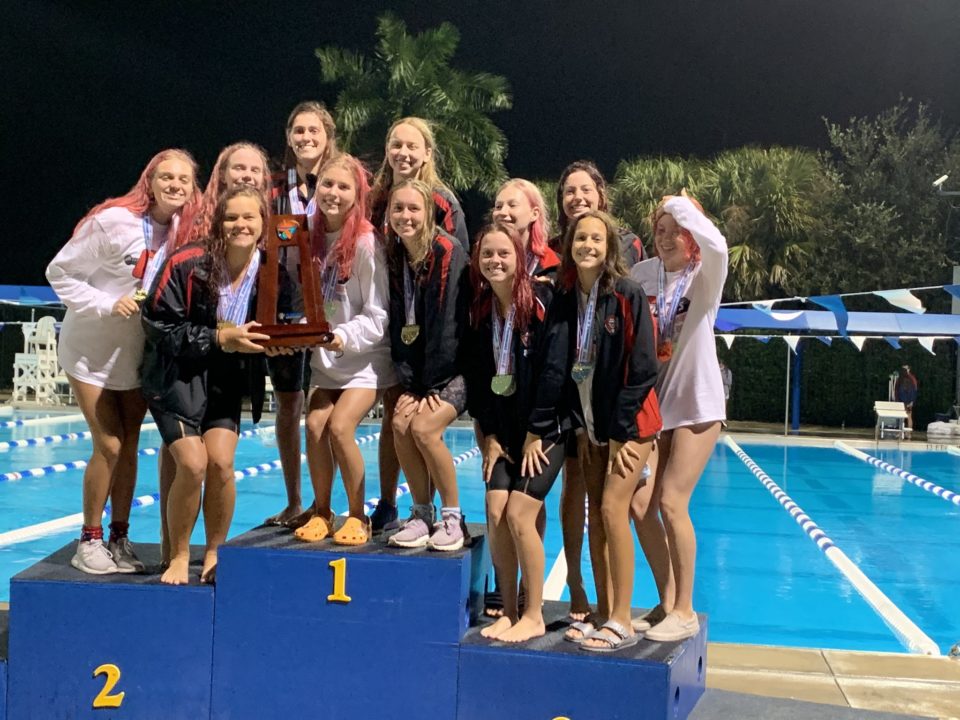 Lexi Mulvihill broke an 18-year-old state record in the girl's 50 free as Florida's 4A school's finished their season with their state championship. Current photo via Creekside High School

Creekside got out to an early lead, winning the 200 medley relay in 1:43.93. Junior Grace Gavin played a big role, out splitting the field by half a second on the backstroke leg (26.40).

In the 200 free, Flagler Palm Coast’s Micayla Cronk led the field, out-touching Addison Sauickie for the top time of 1:46.23. Cronk later added a second win in the 100 free, finishing as the only girl to break 50.0 in the event. The future member of the University of Florida swim team touched in 48.78.

The 200 IM title was also won by a multiple event champion, Ella Bathurst. Bathurst was the only swimmer to break 2:00 in the event, finishing in 1:58.24. Later in the meet she added a second state title in the 100 back (52.77). She will join the University of Virginia next fall.

The swim of the meet came in the 50 free, where George M Steinbrenner senior Alexis Mulvihill broke the state record previously held by Christina Swindle. Mulvihill touched the wall in 22.22, breaking Swindle’s record by .08. Swindle, who went on to be a member of the US National while swimming at Auburn, had set the previous record in 2002.

Mulvihill also added a second win on the day, taking the top spot in the 100 fly (53.16). She is committed to swim for Auburn University next fall.

On the diving board, the top score went to a freshman, Boone’s Lanie Gulch. She finished with 468.60 points.

While she wasn’t able to win the 200 free, freshman Addison Sauickie finished first in the 500 free. She beat second-place Jordan Agliano by two seconds, touching the wall in 4:47.23.

In the 100 breast, a freshman took home the title. Gracie Weyant, the younger sister of US National Team Member Emma Weyant, won the event in her first year of high school. In doing so, she upset last year’s state champion and University of Florida commit Olivia Peoples. Weyant finished in 1:01.51.

Sage Sungail swam to the fastest time in the 200 free, winning in 1:37.99. This was the junior’s first state title as last year his highest finish was second place in the 50 free.

Joining Custer in winning multiple events was Seminole junior and Florida commit Dawson Joyce. Joyce led the field in both the 50 free (19.79) and 100 free (43.59). In the 100 he beat out Macguire McDuff (44.32), who was the West Virginia high school state champion in both the 100 and 200 freestyles last year. McDuff will join the University of Florida team next fall.

The 200 free relay title went to Creekside, who finished in a time of 1:24.10. Seminole took second, with a leadoff leg of 19.99 from Joyce helping them to hold off the 3rd place team by over four seconds.

22.2 going to be good at auburn with her and Kutsch