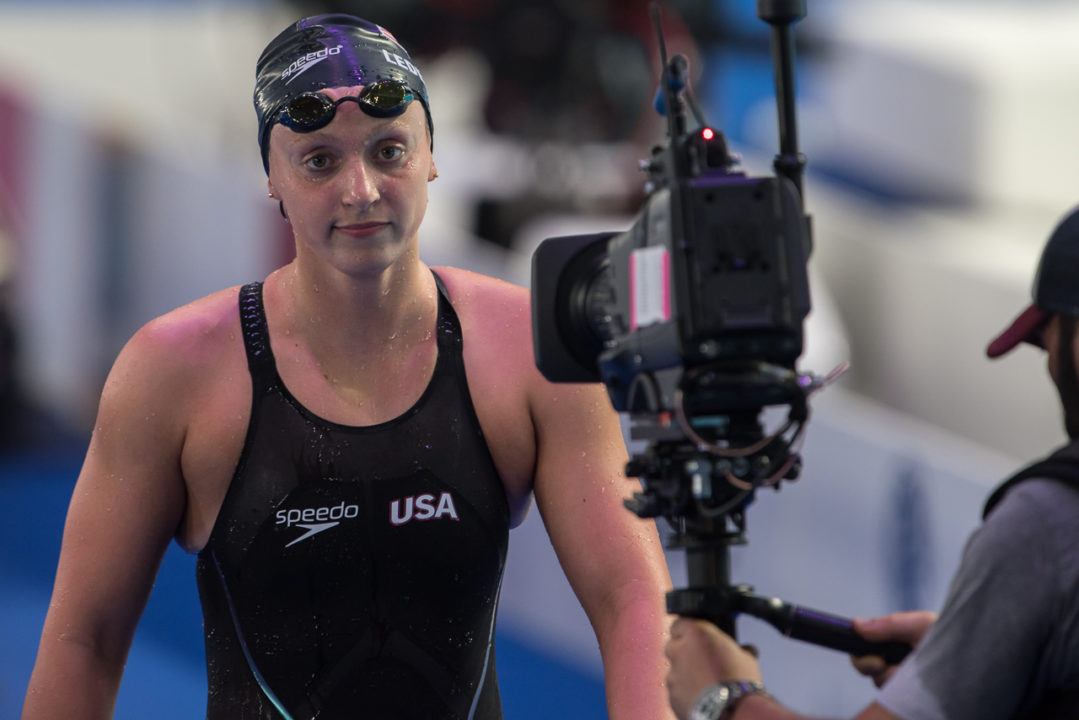 In an otherwise uninteresting and innocuous interview, American swimmer Katie Ledecky declared after her 800 free win on Saturday at the World Championships that she has no interest in open water.

Ledecky is quickly climbing the ranks of the most decorated pool swimmers in history – that 800 free win is her 14th World Championship in just 3 meets raced, which already puts her 3 ahead of Missy Franklin for the most long course, swimming, World Championships by a woman (behind only Michael Phelps and Ryan Lochte among all swimmers).

In spite of becoming so dominant in the distance freestyles that she’s started challenging herself in other races where wins aren’t such a guarantee, she says she has no interest in making the leap into the open water in response to a question in her post-race interview.

“I am not going to venture in open water!” Ledecky said.

Open water swimming is relatively new at the Olympic Games, though there are already swimmers who have had success in both events. In London, Ous Mellouli became the first swimmer to have won gold in both disciplines when he won the open water 10km race. He had previously won the 1500 free in the pool in 2008, and also took 1500 bronze in London – at the same Games where he won open water gold.

The women’s winner in London, Eva Risztov, has never won an Olympic medal in the pool, but almost a decade before her open water triumph, she won 3 long course World Championships in the 400 free, 200 fly, and 400 IM just shy of her 18th birthday.

Ledecky wouldn’t exactly be a trail-blazer into the open water, but subjectively she would be easily the biggest name to try and make that leap. As Ledecky has begun to test new additions to her lineup (she swam the 400 IM at the Pac-12 Championships, and has been on the last few 400 free relays), perhaps open water could be something she’d get more into later in her career. With a Stanford degree on its way, though, Ledecky might not be looking too hard to extending her career much past the point of its natural pool conclusion.

I think Ledecky might be bored with swimming right now. Yes it’s great and all to be setting records and winning golds by huge margins, but at some point maybe it comes a bit hollow? I would not at all be surprised if she moved to a bigger im focus

i am actually pondering about that too …on the picture . Katie looks like its time to change some things . She feels vanished or bored .

Agree..she looks sad or bored. Thought the interview on NBC with Leah and Katie after the 800 free was rather interesting. Leah seemed to really be trying to boost Katie up there.

Indeed. I thought the same when watching the live coverage on Eurosport. Even during the medal ceremony there was no smile.

I had the same thought as well. They were magic together.

There was the first time when I saw both athlete and coach crying after making a great achievement. The accomplishment of this “565” three years long plan that included along the way nine world record worth tears of happiness and sadness at the same time that it is completed and is over. Bruce Gemmell told in his post Rio interview that he would give a lot to train Katie again.
But “No man ever steps in the same river twice, for it’s not the same river and he’s not the same man.” I think.

Katie Ledecky looked like an athlete running on fumes.

That’s an interesting expression on her face.

She set such a high bar at a young age. She’s already has set all the records and won all the gold medals.

Maybe she should quit for a year and then make a comeback.

some changes are surely needed

Greg Meehan may have worked wonders with Maya DiRado but I’m seriously starting to question whether Greg Meehan is the right coach for Katie Ledecky.

If there is one major international tournament to forego, it’s the Pan Pacs.

As one commenter mentioned, maybe similar to Janet Evans. Will continue to win , but will not get any faster. Should have gone pro/cashed in.

if you know about Katie’s family….youll know she doesnt need to worry about money

I think Katie was a little harsh on herself to perform close to her PB. She might have missed her taper a little bit. Lost her 200 free. Didn’t swim near her best time. In 800, Li was too close for comfort. I think this is new to her. So she was not happy and probably was tired.

It does seem IMO like there’s something different. With the exception of 2013 Duel in the Pool, this is the first time we’ve really seen Katie Ledecky have bad swims.

Now bear in mind, when I say “bad,” I’m not talking about her 400 or 1500, which were like top-5 all-time performances. I’m thinking more like the 200, where she was faster in both semis and the relay. I’m pretty sure this was the first time Ledecky swam slower in the final than the semi, and it was both a notable difference, and a meaningful one in terms of place. Or the 400 free relay, where she was over a second slower than in London. Most surprising in my… Read more »

It seems she would win gold in either 5K or 10K by just showing up without any more training. She could stay with the leaders then blow them away in the last 800 meters. So it seems kind of surprising that she so quickly rejected that notion of swimming open water. For quite a while I’ve wondered why she didn’t swim open water. it is not like it would take any more training. She could easily win right now.

There is still a challenge in freestyle competition: textile and rubber suit world records in 200 distance. After Rio I thought it will be her goal. It looked like those records are within the reach. Especially after Sjostrom’s withdrawal from this event. So she can plan her races in most convenient to her way regardless who swims next to her. But since Ohio invitational in November there were no progress and her NCAA finals same as finals at this championships showed no effect of tapering on her results. One cannot distinguish if he/she is watching world championships finals or trials competition. So this goal of four world records is becoming more a dream than possibility.
There could be different… Read more »

She’s also posting less on social media during this meet than she usually does.