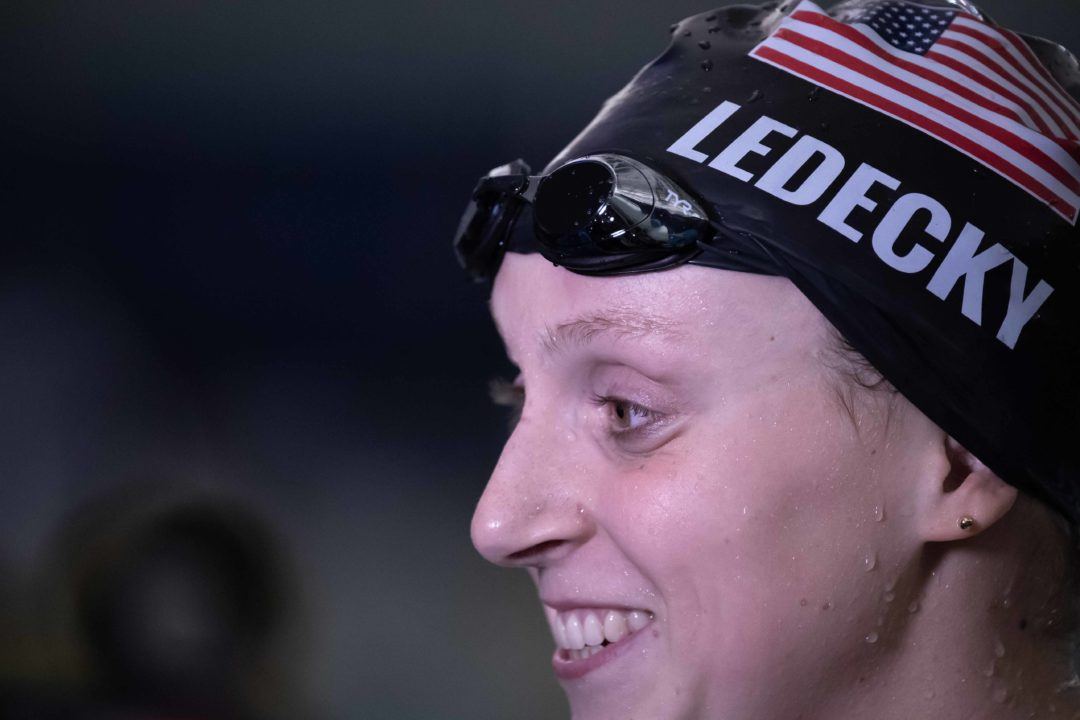 "She has so much talent, so much potential and she has already accomplished so much at 20 years old," Katie Ledecky says of Rikako Ikee. Archive photo via Mike Lewis/Ola Vista Photography

From one elite swimmer to another, American Katie Ledecky recently praised Japan’s Rikako Ikee positivity and perseverance, as the leukemia-stricken national champion aims to return to competition in October.

“She is a great swimmer and she is a great person,” Ledecky told Kyodo News in a video interview a day before Tokyo marks one year to go until the postponed Summer Games. (Kyodo News)

20-year-old Ikee is still in rehabilitation mode after having spent nearly a year in the hospital undergoing treatments for acute lymphocytic leukemia. Just months after having earned the first-ever MVP title at an Asian Games in 2018, Ikee revealed her diagnosis in February of 2019 and was only released from the hospital in December of that year after intense chemotherapy treatments.

Multi-Olympic gold medalist Ledecky said of her fellow competitor who actually beat the dominant American at the 2018 Pan Pacific Championships in the 200m freestyle, “She just has such a positive attitude and it’s very inspiring. I think she has inspired many beyond her own country and the swimming community as a whole.”

“It was so hard to see her go through this over the past year. I know the whole swimming community has been behind her,” she said.

Regarding that 200m freestyle in Tokyo nearly 2 years ago, Ledecky said of the battle, which saw Canadian Taylor Ruck come out on top, with Ikee in silver and Ledecky in bronze, “That was a fantastic race, a very tough race.

“I was struck by how friendly she was, and how kind she was, and she has such beautiful strokes and is an incredible swimmer. She has so much talent, so much potential and she has already accomplished so much at 20 years old.”

Despite Ledecky’s legendary prowess in the pool at practice, domestic and international meets, the former Stanford Cardinal says she “does not have an ounce of the toughness” that Ikee possesses.

“I’ve seen on social media, and in the news, she has a great perspective on things and seems to know to take a step by step (approach) and focus on one day at a time,” said Ledecky.

“I can’t wait to see what she can accomplish in the pool in the years to come.”

As we reported last month, Ikee said she is in the pool four times a week and has weekly weight-training sessions and says she is now targeting the Japan Intercollegiate Championships, an annual meet slated for October.

Kind of a pointless article. Who wouldn’t admire her perseverance?

Frankly, it’s great to see these types of articles. Shows how those at the top are more than simply fast swimmers.