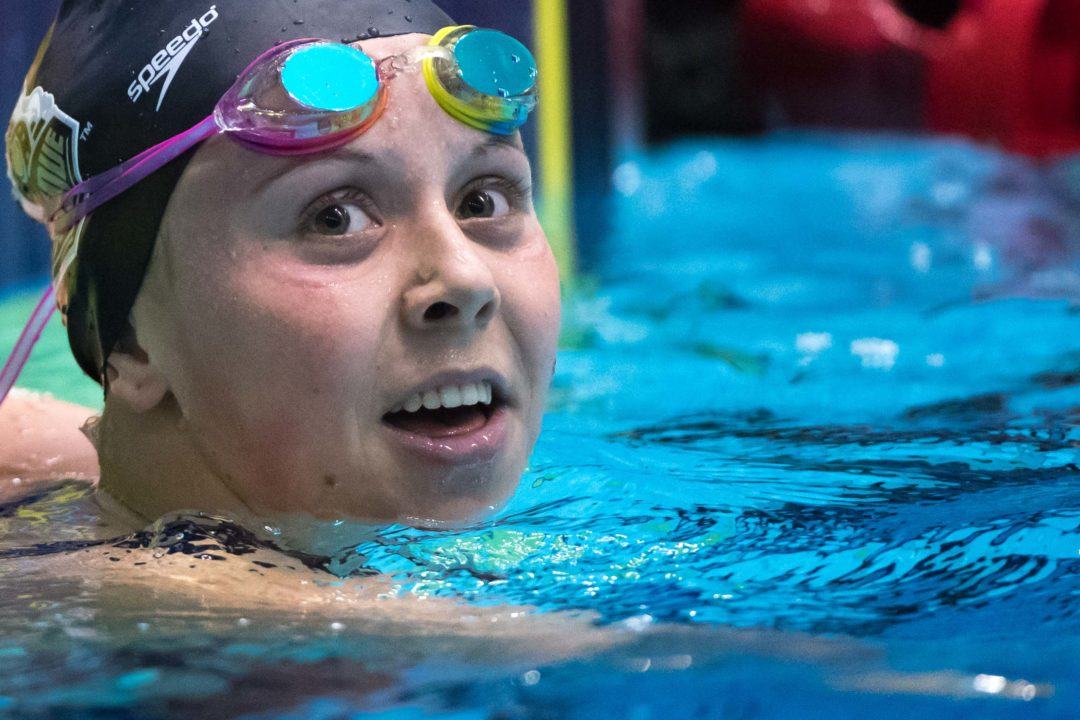 Having recently come off of an exciting senior year of collegiate swimming, Kaersten Meitz is hungry for more. Her performance at the recent Ohio Valley Championship meet ranked among the best female swimmers in America, and she appears to be on an upward trajectory as she forays into the world of professional swimming.

Kaersten Meitz is a USA National Team member and 2018 Purdue University graduate.  She had an illustrious college career, her accomplishments including medaling at the World University Games and setting the fastest times for Purdue in the 200, 500, 1000, and 1650 yard freestyle events during the 2017-2018 season. She recently made the decision to swim professionally, signing with A3 Performance, and is looking forward to continuing her swimming career post-college.

Meitz largely attributes her success in college swimming to having a positive attitude and believing in her coaches and teammates, “I think that, coming into the program, I was very open-minded, and ready to take on whatever challenge that our coaches gave us… I trusted my coach and teammates 100% and wholeheartedly.”

Meitz also acknowledges the importance of having fun when swimming, saying that enjoying time with her teammates motivated her to work hard in order to help the team succeed, “If you’re not having fun, you’re not going to put as much effort in.”

Meitz has always been a strong athlete, but over the past couple of years, she has become a major contender in high-level swimming, competing in races with some of the world’s best swimmers, including Katie Ledecky and Leah Smith. She is embracing her position as one of America’s top freestylers, saying, “I’m not going to lie; after 2016 [Olympic] Trials, I was definitely starstruck by some of the big-name swimmers, but once I started improving, I realized that I can be at the same level as those swimmers, and that’s been really cool. I don’t think it intimidates me as much as it is a chance to race some of the best people in the world, and it’s an honor to do so.”

This attitude has helped Meitz zero-in on some of her goals and has pushed her to achieve greatness, “My junior year, I had never made an A final at a NCAA championship…and my main motivator was ‘I want to be on that podium with Katie Ledecky’”. She ultimately achieved that goal her senior year in the 2018 NCAA Championship, taking third in the 500 freestyle in a personal best time of 4:35.82.

After that exciting NCAA meet, Meitz was approached by Dan Meinholz, whom she has known since childhood. Meinholz offered her the opportunity to partner with his company, A3 Performance, a brand that focuses on innovating new swimwear technology and equipment for athletes. Kaersten is looking forward to partnering with the brand, saying, “I’m super excited. I’ve known Dan, the CEO of the company,  practically my whole swim career because I used to swim with his daughters, so I know that I trust the brand and product. I had never really realized that I was a swimmer who could be sponsored, and this company is one of the leading innovators. My personal goals and values align with the goals and values of A3.”

With her college career ending and her now-professional career beginning to take off, Meitz has had to redefine the purpose of her swims, saying “I think my goals are going to become a lot more individualized. In college, a lot of our goals were oriented towards the team, so competing for myself will be very different.”

However, Meitz plans to continue training at Purdue under her collegiate coach, John Klinge, and hopes to remain an active member of the Purdue family even as she sets her sights on new horizons, “By me being at Purdue, I can hopefully still ‘swim for them’ by pushing everyone in practice and helping make them better.  I can’t see myself going anywhere else. I love this place. I couldn’t leave my coach, and I really trust everything he has done for me so far.”

The next few years will be defining and formative years for Meitz’s career, but she is ready to embrace the challenge, “I’m really looking forward to developing more relationships with other swimmers on the National Team. Last summer, I got my first taste of making the national team and competing at the World University Games. It was really cool, and my eyes were opened to the fact that my past rivals could be my friends. It really humanized them. I’m looking forward to competing in more international meets over the next two years and to continue to grow.”

Meitz has become a major contender on both the national and international stages, and she intends to keep working hard and enjoying the sport as her professional career takes flight, “I just really love the sport of swimming”.

Best of luck Kaersten! A great competitor and advocate for the sport.

It would be awesome if they made a point to always include some times, given that this is a swimming website.

“She ultimately achieved that goal her senior year in the 2018 NCAA Championship, taking third in the 500 freestyle in a personal best time of 4:35.82.”