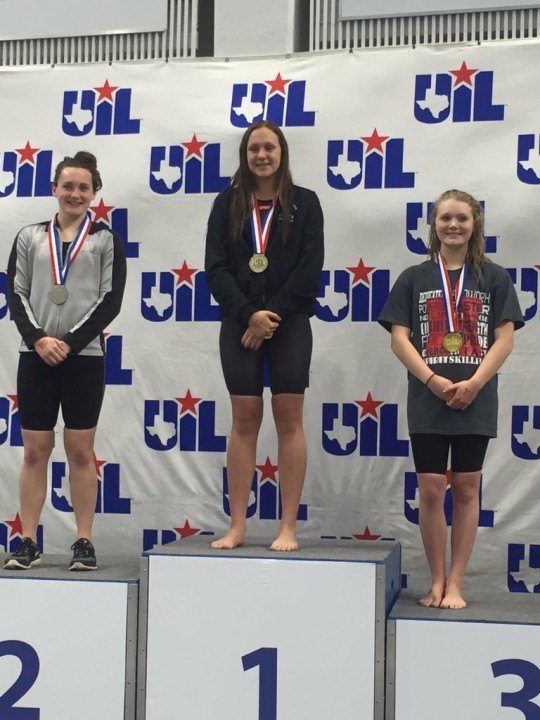 Sophomores Julia Cook of Bryan and Rachel Ramey of Frisco Heritage each set 5A records at the 2016 Texas 5A State Swim Meet, but Frisco High School came away with the team title.

Meanwhile, Ramey annihilated the 100 breast record in both prelims and finals. The previous record was a 1:03.13 set by Madisyn Cox, but Ramey went a blazing 1:01.90 in prelims and an even faster 1:01.78 in finals. Kylie Powers of Fort Bend, the defending champion, also came in under the mark, but her 1:02.89 wasn’t quite fast enough to catch Ramey.

The Frisco Fightin’ Raccoons battled throughout the meet with the Houston Stratford team, but the Raccoons came up on top, finishing the meet with 187 points to Stratford’s 156.5. Frisco’s highest placement came in the 400 free relay, where Lindsay Ryalls, Emily Sandwisch, Rylee Lin, and Mallori Allen outtouched Magnolia for a 3:30.48 to Magnolia’s 3:30.71.

Sophomore Gabrielle Kopen of Prosper won a pair of titles in the mid-distance free events, defending her double individual championships from last year. She didn’t quite hit her 5A state record in either event though. She won the 200 free in 1:47.13 and the 500 free in 4:44.56, narrowly missing her records from last year’s meet: 1:46.80 and 4:42.16.

Abby Koczo, another freshman, won the 100 back for her Frisco Reedy team, finishing well ahead of the field in 55.78.