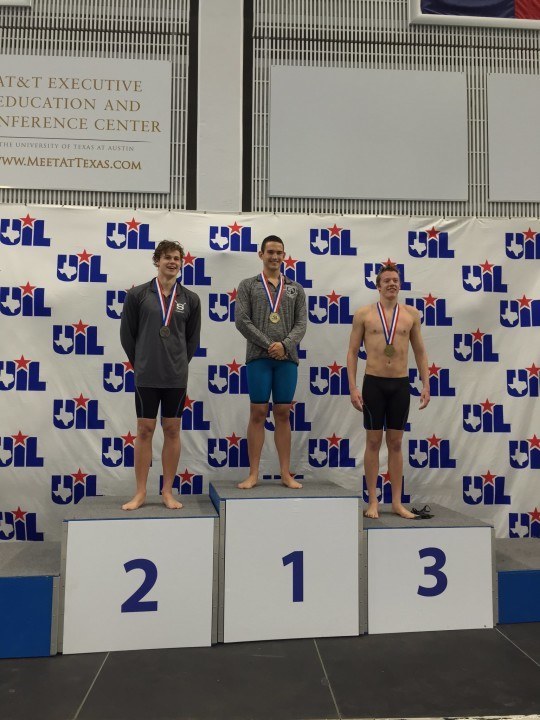 Owen Upchurch (middle) set a new Texas 5A state record in the 100 free and swam a killer anchor leg to propel his Boerne relay to a state title in the 400 free relay. Also pictured: Clayton Bobo (left) and John Winkler (right). Current photo via @AquaticsChs Twitter

Although junior Hudson Smith of Brenham and senior Owen Upchurch of Boerne Champion each set a new 5A state record at this weekend’s Texas 5A State Swimming Championships, the team title went to Austin Vandegrift. Vandegrift fought with Frisco to the end and ended up at the top of the team scores with 189 points to Frisco’s 172.

Smith defended his title from last year to take down the old record, a 56.63 set by Ford Story in 2012, by swimming the 100 breast in 55.97. He came in over a second ahead of second-place Jiwoo Oh of Frisco Liberty, who finished in 57.11. Smith took his second individual title of the night in the 200 IM, where he swam 1:49.40 to finish five seconds ahead of the field.

Upchurch also took his second event title in as many years, winning the 100 free in 44.96 to become the first Texas 5A swimmer to go under 45. The old record was a 45.13 set by Corey Nix in 2012. Second place in that event went to Houston Stratford’s Clayton Bobo, who finished in 45.30.

Despite his state record, Upchurch’s star performance of the meet came in the 400 free relay. He nearly single-handedly won the event for his Boerne Champion team with an incredible anchor-leg 43.97 split. When Upchurch dove in, Boerne sat at seventh place. His initial 50, a 20.98, shot his relay up to third, behind Stratford and Brenham, and his final 50 gave his team a .04 second edge on Stratford. Jakob Garcia, Conner Fitzgerald, and Jacob Poston joined Upchurch on the podium after a collective 3:11.98 to outdo the Stratford team’s (Bobo, Dean Rathgeb, Jim Nantz, and Corey Stephenson‘s) 3:12.02.

Bobo took his own titles in the 50 free, where he was the only swimmer under 21 seconds with 20.71, and the 200 medley relay. Bobo swam the backstroke leg of the winning relay, joined by his teammates Stephenson, Peyton Moak, and Nantz for 1:35.04.

Mizzou commit Micah Slaton won the only title of the day for Dripping Springs High School with a speedy 48.87 in the 100 fly. Slaton also had a runner-up finish in the 100 back with 50.69, but College Station A&M’s Peter Simmons was too fast for him, winning the title in 49.80. This marked a huge improvement for Simmons, a sophomore who finished fourth in the event last year.

Vandegrift’s overall championship title came mostly from depth in the events. Their only event win came in the 200 free relay, where Zachary Bezella, Andrew Pickard, Daniel Sarman, and John Winkler teamed up for 1:25.73 to win the event by nearly two seconds.