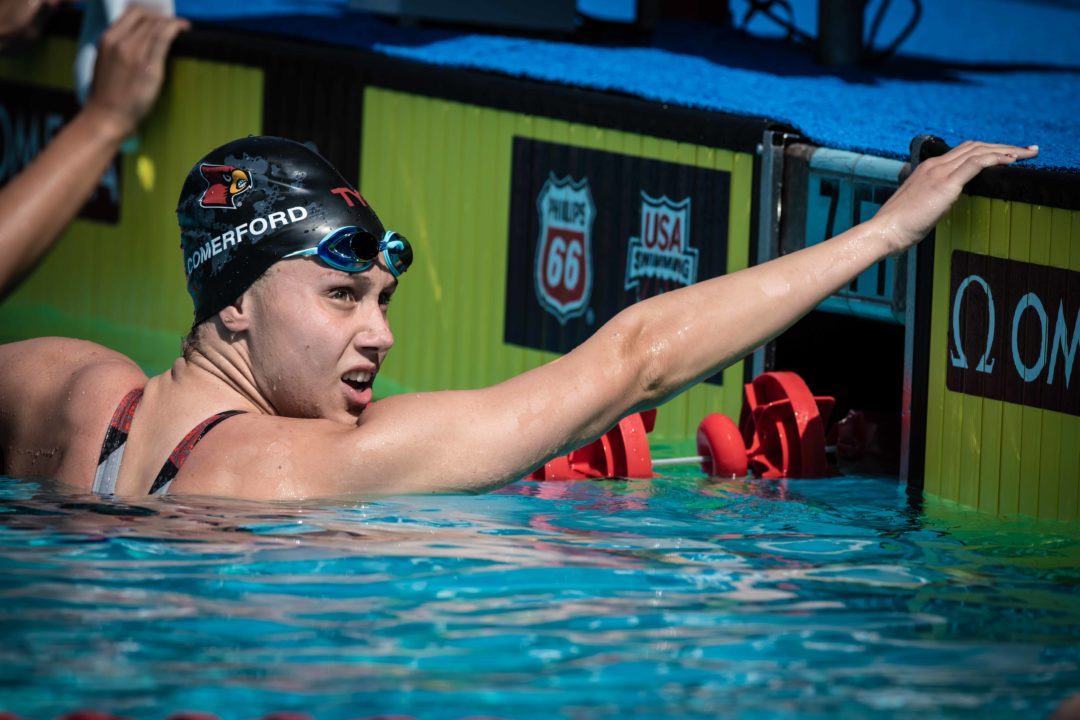 The final session of the IU Invitational will include the 200 back, 100 free, 200 breast, 200 fly, and 400 free relay. Results from the distance session will also be included.

Mallory Comerford (Louisville) swam a 47.04, which would be the fastest time in the nation this year, if not for her season best of 46.96. She was in a very tight race with Ky-Lee Perry (NC State), hitting the 50 mark at 22.61 and 22.70 respectively. Comerford then opened up a more comfortable lead on the final 50, going a 24.43. Perry shaved another .04 seconds off her best time, which she swam this morning. Louisville had a total of 9 swimmers go under 50 seconds in the 100 today: Comerford, Arina Openysheva, Annette Schultz, Casey Fanz, Lainey Visscher, Dianna Dunn, Avery Braunecker, Katie Schorr, and Nastja Govejsek.

In a very tight race, Bruno Blaskovic ran down NC State’s Noah Hensley to give Indiana the win in a very tight race. IU finished in 2:49.56 to NC State’s 2:49.79. Zach Apple led off for the Hoosiers in 42.26, while Jacob Molacek led off for the Wolfpack in 42.45. Mohamed Samy then posted a 42.43 split to Justin Ress‘ blistering 41.97 for The Wolfpack. Vini Lanza then split a 42.63 for IU, while Andreas Vazaios went 42.26 for NC State. Bruno Blaskovic then managed to out-split Noah Hensley 42.24 to 43.11, which was enough to give the Hoosiers the edge, and the fastest time in the nation this year. Both teams also achieved NCAA A cuts in the relay.

Waiting for a time where Apple actually swims faster in finals than prelims in long course ..

Surprised NC States 2:51+ “B” Relay gets no mention. Really really fast for a “B” especially in mid November.

Yep. Not surprising since he kicks out 15 meters off each wall so his fly, back and free will be similar for 60 meters and only vary for the 40 (last 10 meters of each 25).

Why are people worried about Finnerty when he’s going 2 seconds faster than last year at this time?

Maybe because he won NCAAs last year in a 1:50 and couldn’t break 2:00 in prelims today.

I mean, do we really think he tried in prelims if he is dropping 5 seconds in finals…?

I never said I was worried. I just responded to your question why some people may be worried.

I had a friend who was a stud who always sucked in prelims, and it wasn’t because he didn’t try. He used to say he just couldn’t get moving. So it’s possible he tried and could only go 2:00 in prelims.

I never knew Grant House could swim such a fast breaststroke