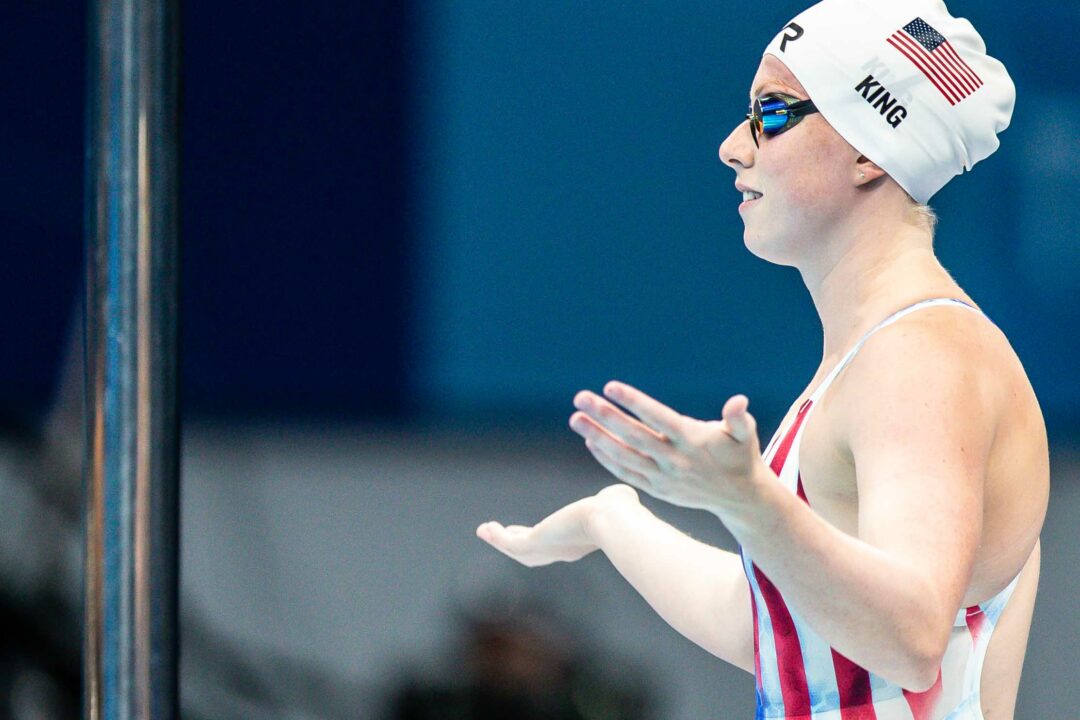 In slow motion, by the strictest interpretation, the disqualification was probably right; but, it is really difficult to see at full speed. Archive photo via Jack Spitser/Spitser Photography

Yesterday, we posted a clip from above the water of Lilly King‘s 75 meter turn on the breaststroke leg of the Cali Condors’ 400 medley relay at the ISL finale.

On Saturday morning, the league posted the underwater footage of the touch to Instagram. We’ve uploaded the most relevant section to YouTube, since you can’t easily pause an Instagram video or go frame by frame.

King’s Cali Condors teammates, as well as her training partner Annie Lazor of London Roar, flooded the comments of the ISL’s Instagram post declaring that they didn’t think it was a disqualification. Coleman Stewart brought up some missed 15 meter disqualifications earlier this year, alluding to an anti-Condors bias after he was disqualified for a 15 meter violation earlier this year. Read more about that controversy here. Even swimmers without any skin in the game, like Matt Grevers and Bruno Fratus, chimed in with their opinion that the touch looks legal.

There are three different angles in the video: one from above the water, one from a side view (that shows one swimmer very clearly, but that swimmer isn’t Lilly King), and one from the bottom of the pool.

The last one is the most relevant as it shows the best angle of the touch.

Pro tip: on YouTube, you can use the comma and period keys on your keyboard to go frame-by-frame.

From this angle, we can see what appears to be a non-simultaneous touch, with her left hand hitting first, and then her right hand. This is the opposite of what we thought the official might have seen based on the high angle above-the-water view.

This is the second time that King has been disqualified for this infraction at a major meet, after prelims of the 200 breaststroke at the 2019 World Championships. Just like that call, when slowed down, we can see that the call was correct, but it sure looks okay in real-time.

As King said at the 2019 World Championships: “I think it would have been very difficult to see with the human eye personally, but I think the official was standing at just the right angle and she got me… The officials are there to do their job and that’s what they did.”

But it seems that maybe this is (yet another) breaststroke rule that needs some review. The exact language of the rule is as follows:

At each turn and at the finish of the race, the touch shall be made with both hands separated and simultaneously at, above, or below the water level.

A most literal interpretation of the word “simultaneously” is, effectively, impossible to adjudicate. With some electronic means of measuring, either via pressure sensors or high-speed cameras, we could set a certain threshold of the gap that could be considered “simultaneous.” But until then (and there are a lot of other things in swimming that could be fixed with technology sooner), the actual ruling falls on some subjective point in between those two things.

This time, the result was a 50 point swing between the Condors and their chief rivals Energy Standard. That’s the number to look for in a final score to see if this call was the difference between the two teams.

The final day of competition to crown the ISL champion begins at 7PM Dutch time, 1PM US Eastern Time, on Saturday.

Certainly picky, but the rule is really clear and makes sense –since there is an advantage in reaching the turn or finish with one arm first. Not all rules make a ton of sense when breaking them doesn’t give a competitive advantage, but this one does. She is so close though I’m not sure it’s worth a DQ except as a warning not to get more and more rotated into turns and finishes. Her nice attitude toward the refs was great.

She’s anticipating the turn just like any elite swimmer. Bending the elbow is her downfall. Not sure that’s a DQ or just looks that way because she’s already focused on the next lap.

It’s certainly marginal, both in terms of infringement and potential for gain, versus the extra fly kicks we regularly see at major meets.

More than enough groundwork has been laid.
Gonna just cut to the chase and say it’s DQ.

She should use both hand in breaststroke front touch walls

Prediction. ISL will fold. No season 4.

Terrible call, period. There are a lot of things need to be cleaned up in breaststroke, this isn’t one of them.

Hot take time. She 100% did not touch simultaneously and the official at that angle could definitely see the gap between when her left hand touched and when her right hand touched. Moreover, saying that ISL is targeting Cali to give Energy a boost is completely unfounded other than Shymanovich’s dolphin kick, which yeah is sus but FINA officials aren’t DQ’ing him either. Y’all are more willing to scapegoat ISL and the official for this than question the legitimacy of the rule.
Having said that, ISL is absolutely deserving of criticism for failing to give athletes and coaches more representation and it’s understandable why ISL athletes are angry.