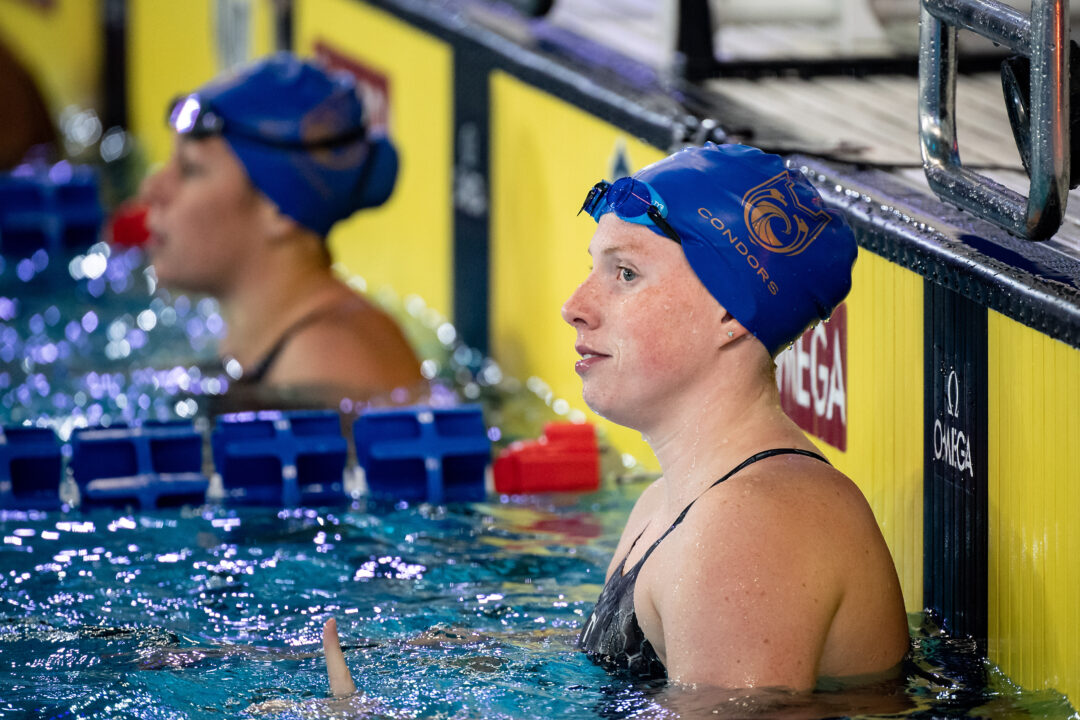 Lilly King was called for a non-simultaneous touch on the breaststroke leg of Cali's 400 medley relay, the same call she was disqualified for at 2019 WOrlds. Archive photo via Giorgio Scala / Deepbluemedia / Insidefoto

A huge disqualification rocked the end of day 1 of the 2021 International Swimming League finale.

Cali Condors breaststroker Lilly King was called for a “one-handed turn” at the 75 meter mark of the women’s 400 medley relay final, according to television announces. That’s a race that the Condors won comfortably before the disqualification. What would have been a 38-point result for Cali wound up being just 6 points, and Cali jumped from 20 points to 38. That means a 50 point swing on the disqualification.

King has been disqualified for a one hand touch at a major meet before: at the 2019 World Championships, King was disqualified in prelims of the 200 breast for a “non-simultaneous” touch, which means essentially the same thing. The video showed a close call, but King ultimately agreed that the call was correct.

In breaststroke, swimmers are required to touch the wall with two hands “simultaneously.” The text of the rule:

At each turn and at the finish of the race, the touch shall be made with both hands separated and simultaneously at, above, or below the water level.

The touch is not required to be side-by-side, or at the same level of the wall, but to the judgement of the official, has to be “simultaneous,” which in the most literal interpretation of the word is essentially impossible.

ISL has not yet posted a video of the race. After the session, a conversation between the television analysts said they could not see it on camera replays – though as Rowdy Gaines pointed out, the official had good positioning to make the call.

The Cali Condors had massive momentum coming out of that relay that was brought to a screeching halt with the disqualification. What could have been a Cali 29-point lead is instead an Energy Standard 21-point lead.

ISL posted the underwater video on Instagram. Still looks like a legal touch to me but I’m not a judge.

More people may watch this turn than all other events in the ISL combined.

in the video her rythm is just off.. no have not seen anything outside streams but… just off, you know

It’s a terrible rule. Because, there is no way on god’s green earth that touches are ever literally simultaneous.

Nelson’s reaction makes me think it was her nkt king

I hope they issue a clarification on Nelson vs King. As a Condors fan, I hope it’s overturned, but either way, I’d like to know for sure what the infraction was.

Listening to the broadcast, as soon as it happened, they said it was a Lily King DQ for a long third turn. I think they said the wrong swimmer and it was actually a long turn on the third wall for Beata Nelson. The results only showing Nelson’s first split would support that. I’d love to see some video replay of Nelson’s walls for a confirmation on that.

I just watched the replay and Nelson’s turn at the 75 looks fine too. I also heard “long turn” and had no idea what that meant.

On replay, Bernie Guenther said “Wrong turn” not “long turn.” He did not say Beata Nelson.