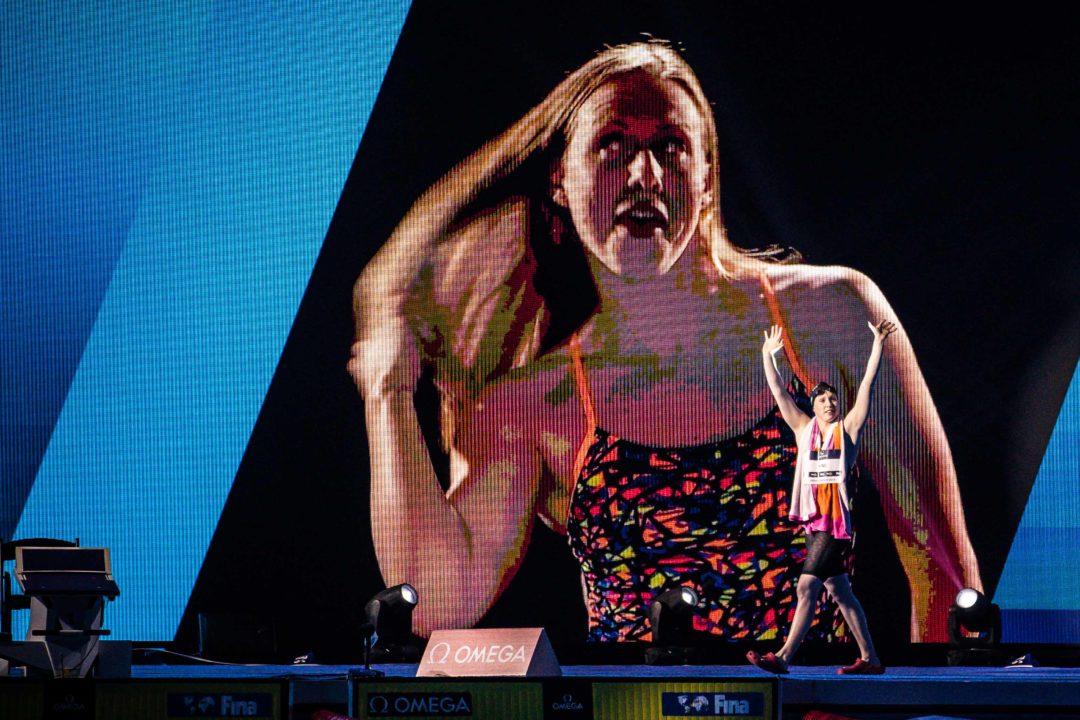 FINA has not released video of what led the disqualification of Lilly King in the women's 200 breaststroke, but here's what they might have seen. Archive photo via Mike Lewis/Ola Vista Photography

Update: this afternoon, NBC Sports posted an underwater video of King’s turn. While certainly a better view than the overhead view originally aired, it’s far from definitive – the call does look plausible, however. See the video below:

After FINA assembled its entire Bureau on Thursday evening in Gwangju to review the disqualification of American breaststroker Lilly King, a final decision was rendered to not overturn her disqualification in prelims of the 200 meter event from the morning session. The official on deck called her for a “non-simultaneous touch” on the race’s first turn of 3, and after both protest and appeal, that call was not overturned.

What We Do Know:

What We Don’t Know:

To be absolutely clear, and reiterate above, we don’t have video of King’s turn for the 2019 World Championships. We do have good video of her turn from the 2016 Olympic Games, where she was not called, but some fans thought she should be.

It’s clear, when slowed down, that King’s turn technique is a little unorthodox. One wrist is extended, and one wrist is flexed. So, the touch is not truly “simultaneous,” though in slow enough motion, nobody’s is.

I am not a certified official, and certainly don’t have the training of the caliber of official that would be on deck at the World Championships, but in my opinion, I would have a hard time making that call in real-time. At the same time, it’s not nothing, and if there were a little more exaggeration of this difference and the shoulder dip on the left side this week, it could very well be a disqualification.

The videos that are available are from above the surface, and while it looks there like a simultaneous touch, there is some blurring of the definition of the hands that might otherwise be able to illuminate the exact nature of King’s turn (if her turn is unchanged from Rio – this one wrist flexed and one wrist extended is certainly not visible from the television angles).

Lilly King disqualified for this turn, what they are calling a non-simultaneous touch #FINAGwangju2019 @swimswamnews pic.twitter.com/wZ8QM5x9iz

Inconclusive. The logical path is that FINA had a clear video shot underwater that at a minimum was not enough to overturn the call, or perhaps confirmed it.

I’m not buying any conspiracy theories about King being outspoken and FINA targeting her for a disqualification. She hasn’t even been the most outspoken breaststroker at this meet, and if FINA is going to target athletes in this manner, they’re probably not going to target the Americans – which is a federation that, if they wanted to, probably has the power to break the proverbial back of a thinning FINA authority. There are Americans working the video review cameras as well. There’s no way that so many people, especially once it goes to the full-scale FINA Bureau (which has 2 Americans on it), that all of those people stay silent in this era where whistle-blowers are given cult status. None of that adds up.

If there were any conspiracy, the better one is that the official made the call authentically on deck, and the FINA Bureau wasn’t inclined to overturn it because of the fact that the host country, South Korea, would lose a semi-finalist, and this could have swayed their interpretation of a close call when reviewed.

Ultimately, FINA should release the video and an explanation of the call. In a meet where they have been absolutely battered, if they believe that the call was correct, detailing that publicly is an easy ‘win’ from a public relations perspective. The NBA now does last 2 minute reports from all close games, and ESPN puts a ‘strike zone’ box on the television screen during baseball games. Both have been the best advancements in officiating in years. This would be FINA’s way of following suit.

Put on a brave face in the stands. This video, from teammate Grant Shoults, shows her with her goggles on and doing her pre-race routine just before the start of the semi-finals. The silver lining is that now she has an opportunity to figure out what went wrong and correct it before the really big show begins: The Olympics.

Well now she knows what she needs to work on

If she still does her turn that way, I’m not terribly surprised she got DQ’d. I can see why she hasn’t been called on it more often, its subtle and I don’t think it provides any advantage like a double dolphin kick would, but I can see how an official might see that as inconsistent with the letter of the law.

Exactly. Even seems like she takes her left hand away from the wall before the other touches.
Happens fast, it is a tough call, but having video review really makes it easier.

It does provide a small advantage – why do you think she does it?

probably doesn’t lose as much momentum that way, makes the turn feel easier, although not faster that much.

she knows it is faster turn.Period. She was called on cheating finally.

Once a cheater, always a cheater.

Speaking of cheaters: The United States became the first team to win two Women’s World Cup titles.[14] Brandi Chastain’s celebration, which ended with her removing her jersey and revealing her sports bra underneath, appeared on the covers of Sports Illustrated, Time, and various newspapers the following day.[15][16] The celebration was criticized for being allegedly disrespectful, unfeminine, or inappropriate, but has endured as one of the most iconic moments in women’s sports history.[17] Chinese media protested Scurry’s save on Liu Ying, accusing her of cheating for stepping ahead of the line before Liu kicked the ball; Scurry confirmed that she did intentionally step over the line, but stated that “everybody does it”.[18][19] Farley, Maggie (15 July 1999). “Crossing the line”. Los… Read more »

Agree. NO way a DQ from Rio. Too fast to call and if you start video reviewing or using touch pads to CALL (not overrule), you would have a nightmare on fly, breast and IM.

I agree with this. Sure looks suspicious in slow mo though.

FINA warning letter is on its way