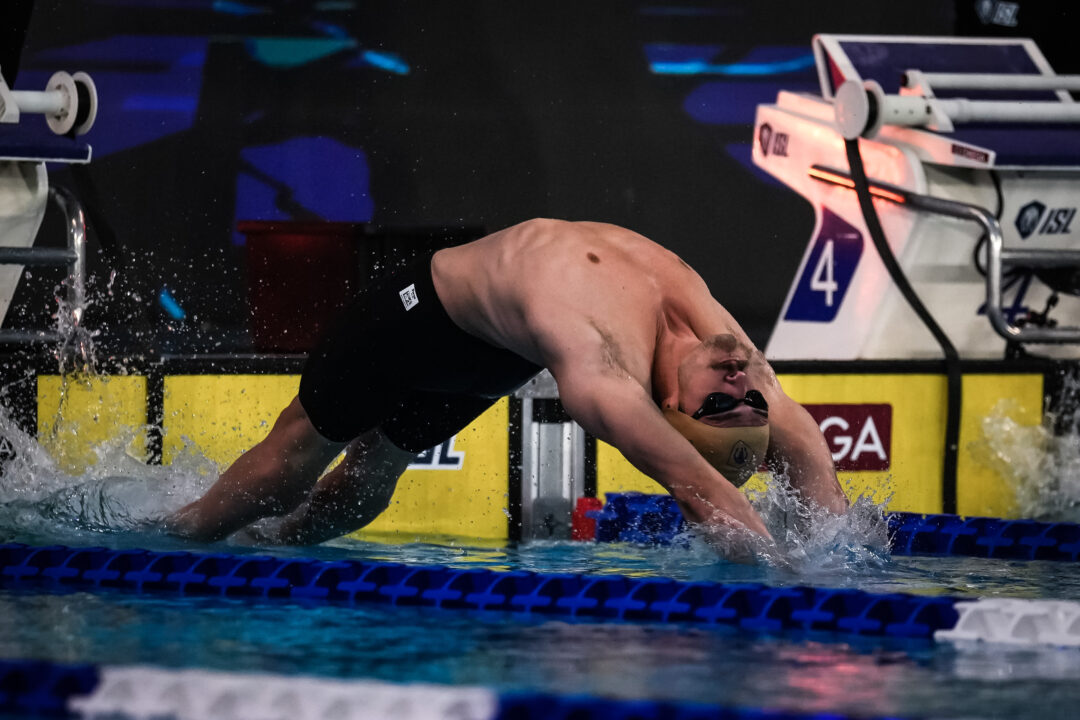 While the camera work performed by the ISL is commendable, giving the pool deck over to a film crew makes the officials' jobs more difficult. Current photo via Mike Lewis/Ola Vista Photography

If you’ve been watching the third season of the International Swimming League and have paid attention to the amazing underwater dolphin kicking skills of the top athletes, you’ve probably noticed how close some of them come to kicking beyond 15-meters in backstroke, butterfly, and freestyle.

Remember–there is no 15-meter violation in breaststroke.

There have been surprisingly few disqualifications thus far in the third season of the ISL, but on day 2 of Match 6, Coleman Stewart of the Cali Condors was disqualified for kicking beyond 15 meters underwater on the final 25 of the 100 backstroke. This was a big blow to the Condors points-wise, though it was not the first 15-meter violation of the week.

In Match 5, Tom Shields of the LA Current kicked beyond 15 meters on the first length of the race yet was not disqualified for it. While Stewart consistently kicks to 15 meters off of almost every wall, and so far has been given the benefit of the doubt, Shields was the most-clearly missed violation that we’ve seen this season.

Shields said on Monday morning on Instagram (after this article was originally posted) that he “knew he was pushing the 15 (meter line) on skins” because he knew he was in 8th place at the time. “They’ve been relatively chill,” Shields said in the post, indicating that with little to lose, he thought he’d try to tiptoe as fine of a line as he could.

Shields can clearly be seen in lane 2 breaking the surface after his full head and shoulders have cleared the yellow 15-meter marker. The full video of the race is also posted below.

Why wasn’t Shields disqualified then?

For filming purposes, the ISL aims to keep the pool deck as clean as possible, meaning the officials are often not as close to the pool as normal. All ISL officials are certified, and because FINA now recognizes times swum in the ISL, it is important that normal rules are enforced. In this case, there is one official standing on the lane-1 side of the pool at the 15-meter marker nearer the blocks, though they are kept behind the camera track that runs beside lane 1. For comparison, FINA places multiple stroke judges on both sides of the pool utilizing “lead/lag” to coordinate coverage, as well as at both the start and turn ends.

In Match 2 of the 2021 ISL season, Stewart broke the World Record in the 100 meter backstroke with a 48.33. SwimSwam’s Coleman Hodges provides an in-depth analysis of Stewart’s World Record swim which shows fully-legal underwaters.

While the camera work performed by the ISL is commendable, giving the pool deck over to a film crew makes the officials’ jobs more difficult.

In the entire 2021 ISL season, only 4 disqualifications have been called.

The ISL has disqualifed swimmers in the past for kicking beyond 15 meters, such as Shane Ryan at the 2019 American Derby where he represented the LA Current. There, Ryan took a DQ in the 50 backstroke. Even so, disqualifications are rare in the ISL.

Is this what is taught at NC State??

Probably pretty good – I mean he is about to have a second child and had a pretty good match at ISL earlier this week, being a part of why DC were as good as they were

Yeah, they just don’t teach one-hand touches at Worlds or dolphin kicks at Pan-Ams in breast.

Guess he was raised different

Stewart goes past 15m every swim.

There’s no 15m limit in breastroke because if you do a legal pullout you can’t go further than 15m, you’d have to sneak some additional dolphin kicks

Daiya Seto has joined the chat

This is not true. The reason there is no limit is because at a certain point in the breastroke pullout, you will eventually slow down significantly. I would argue that almost all male breastrokers at the international stage could do a pullout past 15 with one dolphin.

All male breaststrokers on state level can do that.. no need to go that high level

I guess Max McHugh, Nic Fink and oh yeah Caeleb Dressel all sneak in some extra dolphin kicks then

Breeja Larson and Kevin Cordes were the first ones who I remember seeing go clearly past 15 in their full race mode.

Which doesn’t mean they’re the first, just means…that’s when I started paying attention to those things lol.

I guess that’s why you run a swimming media company and I don’t – I still haven’t started paying attention to breaststroke.

I am pretty average, dad body like almost 40 and can go near 15 meters on breast without a block at all.

Really living that handle, aren’t you…

In the 200 breast?? No, that one was probably for a fly kick somewhere. Dude’s a 400 IMer. At some point, subconsciously he was probably like enough already with the breast.

Know that it would screw everything up at this point, but yeah

New rule: everyone go to town on dive breakouts—no distance limit, then pop up at the flags every other length

Or just have a 15 m pool 7 lengths. They are going to have to surface sometime probly at each 2nd lap at 13 M to get a breath. The 3-5 mtr sprint at the end should be scintillating.

This is the kind of Galaxy Brain take I like to see!!

Townley Haas jackpots every swimmer in every race.

We already went through that. Ever watch videos of NCAA medley relays from 90’s?

FINA is hurting our sport with the ridiculous 15m rule! Why not make sure all swimmers are swimming at least by the flag closest to the turn and finish wall! OR allow swimmers to swim the entire race underwater except for the turns! Now that would be exciting!

Then it becomes boring

You are the most ridiculous troll on this site.

It would be easier to keep track if it was just 12.5 meters or 12.5 yards. Clear line at the halfway mark. At least half the race above water.

Different lengths for different courses is a bit of a pain… It is based on the big pool, all 3 courses share the same UW limit.

Some of Coleman’s finishes have been suspect too- fully submerged. Easy to replay and see on video / poor judges. HVe to ask the question why do it if it’s suspect

Having watched some of the matches, with the cameras and glare from the lights, I’m not sure what kind of visibility the officials have at all. Fully submerged finishes are not always easy to call, much easier with side lead/lag.