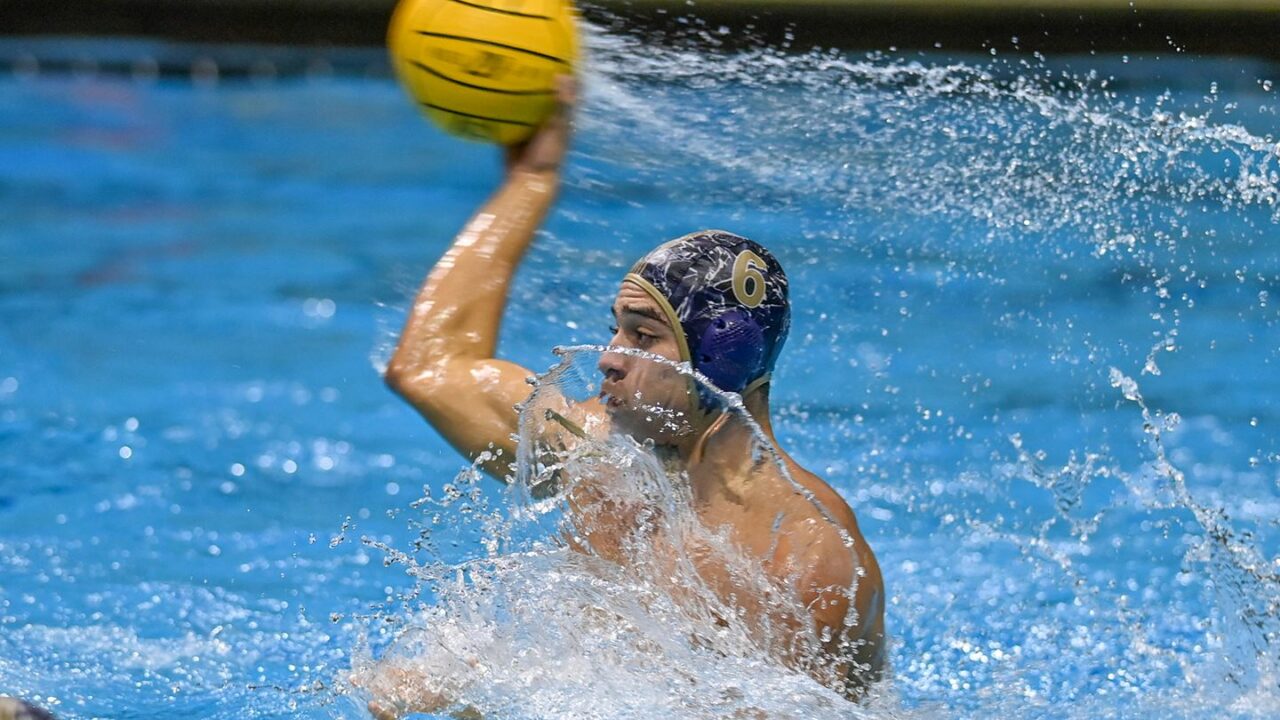 The Navy water polo team (4-3) posted a 12-7 victory over Iona (2-5) to close out play at the 2021 Princeton Invitational at DuNuzio Pool in Princeton, N.J. Current photo via Navy Sports

PRINCETON, N.J. – The Navy water polo team (3-3) split the first day of competition at the Princeton Invitational at DuNuzio Pool in Princeton, N.J. The Midshipmen opened the tournament with an 11-7 victory over Brown (5-2), marking the first time since 2014 the Mids beat the Bears. Navy dropped an 18-4 decision to No. 3 Stanford (6-0) in the night cap.

“I am extremely proud of the guys,” head coach Luis Nicolao. “We defeated Brown for the first time since 2014, which was huge for us. The game was even for a while, but we were able to pull away down the stretch. The defense came up big and we were able to convert some opportunities offensively. We could’ve done better against Stanford, but they are top five in the country for a reason. We have a big game against Iona tomorrow and will look to return home with another victory.”

Ten different Midshipmen scored goals on the day. Isaac Salinas (Spring City, Pa.) finished the day with a team-high five goals, while Jack Weggeland (Riverside, Calif.) added a pair of scores. Jake Altmayer (Pasadena, Calif.) led the team with a pair of assists on the day.

At goal, the Mids used a pair of goals on the day. Caden Capobianco (Laguna Beach, Calif.) opened the day with a win, finishing with 10 saves and seven goals allowed with a pair of steals. Max Sandberg (Newport Beach, Calif.) recorded six stops against the nationally-ranked Cardinal in the late game.

Navy concludes play in the Princeton Invitational with a game against Iona (2-4) on Sunday afternoon at 1:00 p.m. at DuNuzio Pool.

Game 1 Recap: Navy 11, Brown 7
In the first game of the day, Navy had 10 players combine for 11 goals. Weggeland paced the team with two goals, including the game-winning goal. Defensively, Capobianco finished the game with 10 saves to secure the win.

The Midshipmen and the Bears battled back and forth for the first three quarters before the Mids pulled away.

Brown opened the game with back-to-back scores, but Michael Heller (Menlo Park, Calif.) cut the lead in half with a goal off of a rebound. Following a Bears’ goal, Weggeland and Kyle Yelensky (Stamford, Conn.) found the back of the net to knot the score at 3-3 through one quarter of play. In the second quarter, the two teams traded goals with Salinas and Graham Lindner (Bel Air, Md.) scoring goals to go into intermission even at 5-5

Hayden Kahn (San Clemente, Calif.) opened the third quarter with a goal to give the Mids the advantage. The Bears answered with back-to-back goals to regain the lead. Peter Hillen (Orinda, Calif.) scored to knot the game at 7-7 and Weggeland gave Navy the lead, which they would not relinquish. In the fourth quarter, the Midshipmen outscored the Bears, 3-0, to push the lead to four. Ivan Pang (El Monte, Calif.), Travis Berzins (Rancho Cucamonga, Calif.), and Payton Comstock (Clarendon Hills, Ill.) netted goals and the Navy defense posted a shutout to preserve the victory.

Game 2 Recap: #3 Stanford 18, Navy 4
Salinas provided the offense for the Midshipmen in the second game, scoring all four goals in the contest. The four goals gave the senior captain his second hat trick of the season. Sandberg registered six saves between the posts for the Mids.

The nationally-ranked Cardinal opened up the scoring with a goal, but Salinas answered to knot the score at one. Stanford closed out the first quarter with three consecutive goals to take a 4-1 lead. The designated visitors increased their advantage with four straight goals to start the second quarter. Salinas broke up the string of goals with his second score of the game, but Stanford found the back of the net to end the half in front 9-2.

Salinas added two more goals in the third quarter. However, four goals by Stanford in third quarter and five more scores by the Cardinal in the fourth gave the nationally-ranked foe an 18-4 win.

“It wasn’t the prettiest game, but we did what we needed to do to win,” head coach Luis Nicolao said. “There were too many penalties and ejections, but I am proud of the team for pushing through and coming away with a win. We have next weekend off, but then will take on Air Force. We hope to see the Brigade fill up Lejeune Hall for that game.”

Offensively, eight different Midshipmen found the back of the net, including a trip of Mids who notched multiple goals. Isaac Salinas (Spring City, Pa.) paced the offense with three goals for his second hat trick of the weekend. Hayden Kahn (San Clemente, Calif.) and Chris Kim (Los Angeles, Calif.) added a pair of scores apiece. Salinas and Jake Altmayer (Pasadena, Calif.) paced the squad with a pair of assists each.

Defensively, Navy used a pair of goalies. The duo finished with 17 saves and seven goals allowed. Max Sandberg (Newport Beach, Calif.) started the game, earning the win for the Mids. The senior finished with five saves, while surrendering three scores. Sandberg also led the team with two steals in the game. In the second half, Caden Capobianco (Laguna Beach, Calif.) took over between the pipes, finishing with 12 stops and giving up four goals.

Iona was the first team to score, netting a goal early. Graham Lindner (Bel Air, Md.) followed with his first goal of the game to knot the score at 1-1. Following a Gaels goal, the Midshipmen used scores by Kim and Ivan Pang (El Monte, Calif.) to take a 3-2 advantage through one quarter. Lindner opened the second quarter with a pass to Kahn, who buried the ball in the back of the net. Iona trimmed the margin to one, but Kim followed with his second score of the half. Salinas and Nathan Duchez (San Jose, Calif.) extended Navy’s lead to 7-3 heading into the half.

In the third quarter, Iona used back-to-back goals to trim the margin, but Navy responded with scores from Salinas and Kahn. Jack Weggeland (Riverside, Calif.) extended the Mids’ lead with his third goal of the weekend. Salinas opened the fourth quarter with his third goal of the afternoon, giving the team captain his second hat trick of the weekend. Kyle Yelensky (Stamford, Conn.) pushed the advantage to seven. Iona netted a pair of scores, but Navy was able to come away with a 12-7 victory.

Navy returns to action on Thursday, Sept. 23, as the Midshipmen host Air Force at Lejeune Hall at 7:00 p.m. The game will be broadcast on ESPN+.