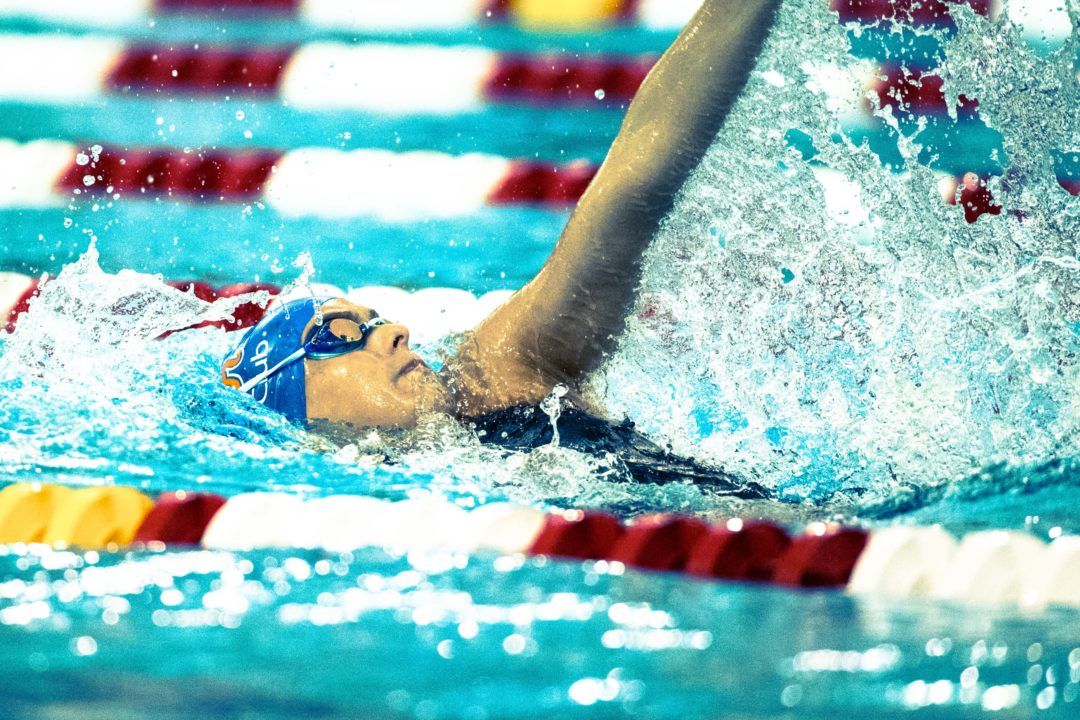 Freshman Isabel Ivey has now joined the Bears and made her college swimming debut after taking to the pool on Friday against Arizona State. Archive photo via Mike Lewis/Ola Vista Photography

Freshman Isabel Ivey has now joined the Bears and made her college swimming debut after taking to the pool on Friday against Arizona State. In her first meet, Ivey dominated the 100 fly by nearly 2 seconds to take the win in 53.32. She also took 3rd in the 200 free (1:48.18) behind teammate Abbey Weitzeil (1:47.35) and ASU’s Cierra Runge (1:47.92). Notably, Chloe Clark is enrolled at Cal and on the roster, but is not expected to compete with the Bears until the fall.

TEMPE, Ariz. – The Cal men’s swimming and diving team returned to the dual meet portion of its 2018-19 schedule Friday and notched a resounding 178-118 split squad victory at Arizona State.

While a chunk of the Golden Bears were dominating the water in Tempe, another group traveled south to take part in the UC San Diego Invitational, where Cal holds a 100-48 lead over the Tritons after the first day of the event.

The Bears (3-0) took the top three spots in both the 200 backstroke and 500 freestyle. Cal won every individual event except one.

Both split squads will be back in the pool Saturday as the Bears will visit Arizona and the UCSD Invitational wraps up.

TEMPE, Ariz. – California got back into racing form in its first meet of the New Year Friday, surging past Arizona State, 190-110, as the Golden Bears won 12 of 16 events.

Senior Amy Bilquist claimed three events, taking the 100- and 200-yard backstrokes and the 50-yard free, while senior Katie McLaughlin (200butterfly, 500 free) and junior Abbey Weitzeil (100 and 200 free) were double-winners on the afternoon.

The meet also marked the Cal debut of freshman Isabel Ivey. She claimed the 100 fly in an impressive 53.32 with a nearly two-second advantage and also swam legs on the winning 200 medley and 200 free relays.

“I thought we did a nice job today, especially in a busy week that included starting the spring semester and traveling to the meet this morning,” said head coach Teri McKeever, whose team visits Arizona Saturday. “We’ve got to turn it around and put together another good one tomorrow.”

The Bears went first and second or first, second and third in seven of the individual races. Weitzeil was the first to gain an individual win with her time of 1:47.35 in the 200 free. She later posted a two-second victory over teammate Robin Neumann in the 100 free, touching the wall in 48.80.

Cal and Arizona will face off at 11 a.m. PT from Tucson on Saturday morning. The Bears return to Berkeley next week, hosting UCLA Feb. 1 and USC Feb. 2.

“Since I’ve been here, this has been our best men and women’s meet against Cal,” said head coach Bob Bowman. “I thought we had good energy throughout the meet.”

The Sun Devil youth shined in the meet as well, with 13 different freshmen contributing points in the competition. Three of those instances came in the men’s 200 fly, an event in which the Sun Devils sent four freshmen to the block. They were highlighted by Khalil Fonder, Liam Bresette and Lana Berry who all put up five points on the afternoon. Fonder continues to impress in his first year in Tempe, posting five podium finishes so far this season including a first place finish in the 100 fly at USC.

Emma Nordin (1000 free), Silja Kansakoski (100 breast), Nora Deleske (200 breast) and Grant House (200 IM) earned individual victories for the Sun Devils. In her win, Nordin swam a personal best of 9:59.85, eclipsing her previous record of 10:07.73 set in last year’s dual meet at Cal. The 1000 free was also the Devils’ only sweep of the day – Nordin was followed on the board by Kendall Dawson and Caitlyn Wilson taking second and third place respectively.

The Sun Devils have a quick turnaround as they return to the pool tomorrow, hosting No. 7/3 Stanford.

“We want to come back tomorrow to put together a meet at a better level then we had today,” Bowman said. “Typically when teams swim back-to-back the second one is not very good, so our goal is to swim as fast or better than we did today.”

Tomorrow’s meet will also be Senior Day for nine graduating Sun Devils. The seniors will be honored on the pool deck at Mona Plummer Aquatic Center at 11:40 a.m. and the meet will begin at 12 p.m. The meet is free and open to the public and will be broadcast on the ASU Live Stream.

Chloe Clark isn’t swimming any meets this semester, she will only be taking classes.

Any news on Hugo Gonzalez?

None yet. He’s there, he’s training…still no official word on if he’ll get to compete this season.

Hugo is not listed on the latest Cal roster from what I see on Calbears.com.. I am not sure if Cal is still on the quarter system for classes. When I went to Cal eons ago we were on the semester system. Apparently he is with the team so I will go to the USC/Cal dual meet next weekend in Berkeley and report what I see on the decks of the pools, id est, if Hugo is swimming or in street clothes.

Also re: Hugo, can’t say it’s over before it’s over–Zheng Quah only swam a last chance meet his first year at Cal.

Hugo will compete at Cal this semester for sure. He is training, on the roster and taking classes. No eligibility issues