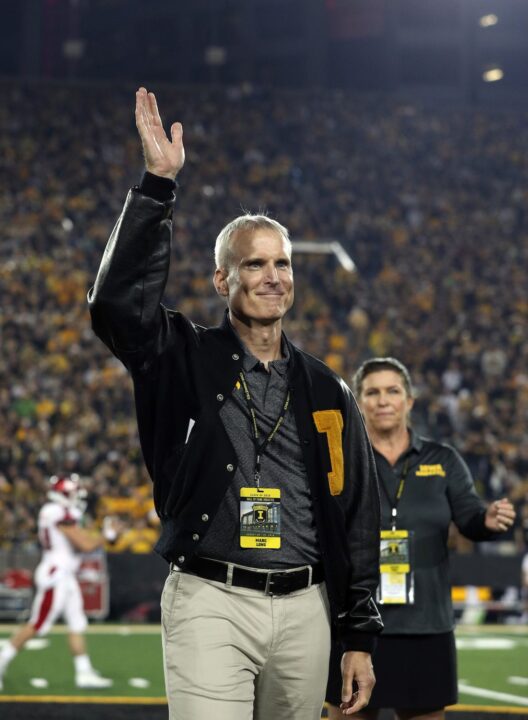 Marc Long "declined the opportunity" to continue as the Iowa women's head coach only after the school cut the men's program at the end of the season. Archive photo via Iowa Athletics

University of Iowa head swimming & diving coach Marc Long has stepped down from his position after 17 seasons at Iowa. The school says he “declined the opportunity to continue as the head coach” next season, where Iowa will be reduced from men’s and women’s teams to just women’s teams.

“This was an incredibly difficult decision to leave a program that means so much to me,” said Long, who has been on the coaching staff since 2002. “It has been an honor to work with many amazing students, athletes, coaches and staff throughout my time at Iowa. That experience and the positive interaction with alumni, families, and fellow coaches has been a privilege.

“I’d like to thank my family and friends for being incredibly supportive, understanding, and encouraging, especially as I take this next step.”

The Hawkeyes had a total of five student-athletes qualify for the men’s and women’s NCAA Championships during the 2021 season. The 4 women didn’t score, while the lone male qualifier Will Myhre was scratched from the meet after a positive COVID test. The men’s team finished 8th out of 10 teams at the Big Ten Championships, and the women’s team finished 8th out of 13 teams.

Iowa announced before the season that they would cut both the men’s and women’s swimming & diving programs after the 2020-2021 season. After legal proceedings surrounding Title IX issues progressed, the school eventually acquiesced and agreed to reinstate the women’s program, but the men’s program has still been eliminated.

During Long’s tenure as program head coach, the men’s highest finish at the Big Ten Championships was 5th in 2012. That was also their highest NCAA Championship finish – 26th.

During his tenure as Iowa’s head coach of both the men’s and women’s programs, Long has coached 53 All-Americans and 169 school records have fallen.  Iowa has also had 450 student-athletes automatically or provisionally qualify for the NCAA Championships.  The program has posted 13 top 40 finishes (six men, seven women) since 2004.

On campus, Long was one of the founders of the Hawkeye Health C.A.R.E. program (now HTP – Hawks to Professionals) — a unique shadowing and mentoring program for UI student-athletes.  He also started the Hawkeye Business Social, a professional development and networking event for Hawkeye swimming and diving student-athletes.

Prior to focusing solely on his head-coaching duties, Long served as the University of Iowa’s aquatics director for his first six years as head coach.  In this dual role, Long was a part of the core committee involved in designing the Campus Recreation and Wellness Center.  The facility, which has hosted an NCAA Championship and multiple Big Ten Championships, is considered one of the best in the nation.

Long was a multiple NCAA finalist, a six-time All-American and a three-time Big Ten champion during his career as a Hawkeye.  He was team captain in 1989 and helped lead the team to a Big Ten runner-up finish and an eighth place NCAA finish – the highest in modern-day history.   In 2019, Long was inducted into the National Iowa Varsity Club Athletics Hall of Fame.

About 10 years too late

Be nice, show some civility

Just like what Marc ALWAYS did for us, right?

Have you ever given your heart and soul to something for 17 years knowing the school didn’t really care about you? Fought tooth and nail for every single inch the program gets? If so, thank you, and you realize the frustration. If not, think about your comments before posting.

Marc has neither. He was there for 17 years, I’ll give you that. His coaching methods were older than Wadley’s hair spray. He wasn’t a personal kind of coach, and his choices for captain were rarely good for the team, and he caters to the administration at the cost of his team.

you have no idea what mediocrity means

Yes speak the truth – 17 years working for a university under extremely difficult circumstances.
I wish you the best Marc.

Congrats on a long career coach. I’m sure all the CF swim alum are proud!

Wonder if the best man from his wedding is?

High performers don’t throw darts! Take “your” lack of success out on “yourself”.