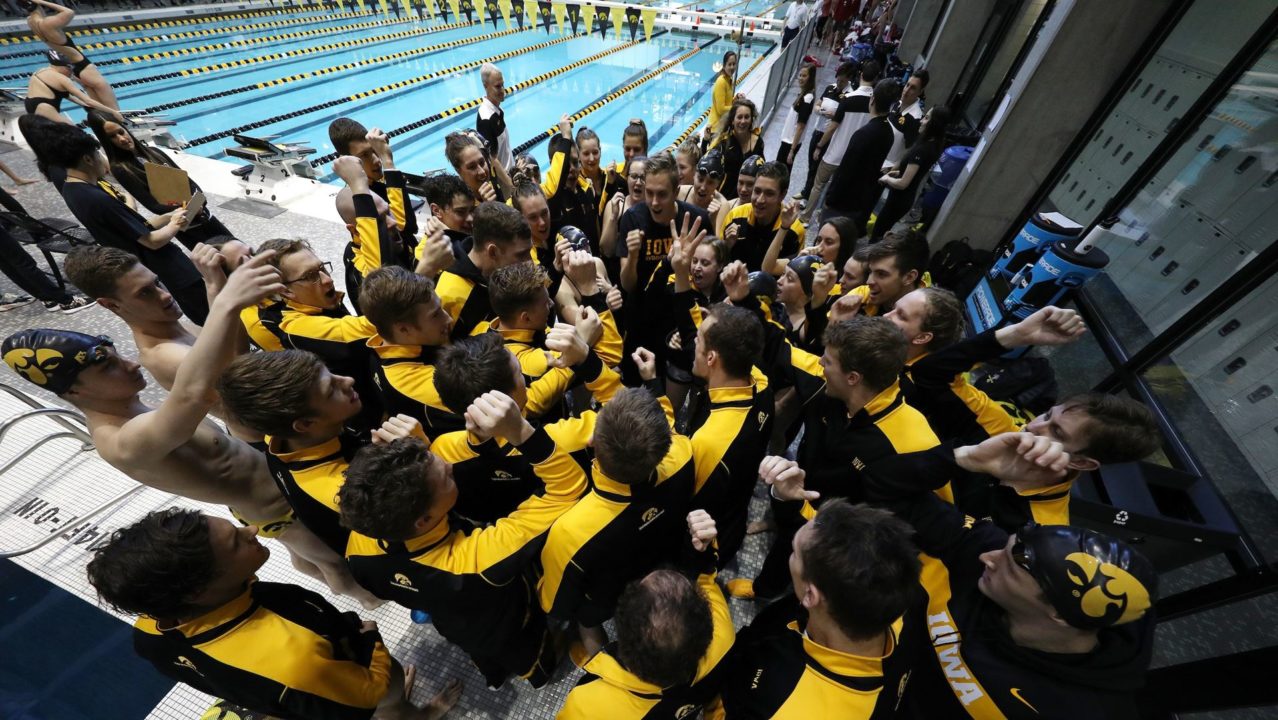 A week after Iowa AD Gary Barta insisted that he was standing by his decision to cut 4 Hawkeye varsity sports, the school reinstated the women's swimming & diving team. Stock photo via Iowa Athletics

The reinstatement comes about a week after Iowa athletic director Gary Barta said he was “assured by a consultant that his department would be in compliance with Title IX before he went forward with a plan to eliminate four sports.” In that same press conference, Barta affirmed his decision to cut the 4 programs.

“Every student-athlete in all 24 sports at Iowa has experienced challenges and uncertainty since the pandemic began. This has been especially true for the men and women in the four sports we announced would be discontinued after this season,” said Gary Barta, Henry B. and Patricia B. Tippie Director of Athletics Chair, upon the announcement. “The women’s swimming lawsuit brought forward last September, combined with the recent court order mandating the continuation of the sport during the legal process, has created additional uncertainty that could last several months or even years.”

Iowa affirmed that they still believed they were within the boundaries of Title IX to make the cuts, but say it was the “right thing to do” to reinstate the women’s swimming & diving program rather than fight in the courts.

Iowa announced on August 21 that it would be cutting both its men’s and women’s swimming & diving programs effective at the end of the 2020-2021 season, ending a 103-year long legacy for varsity swimming & diving at Iowa – one of the longest legacies in college swimming.

The school also cut men’s gymnastics and men’s tennis programs in August. None of the 3 men’s programs cut have been reinstated because of the ongoing budget issues.

Several alumni that SwimSwam spoke to on Monday said that they still think there’s a chance for the men’s team to be reinstated, but that they believe it will take a change in athletic director for that to happen.

The reinstatement of women’s swimming comes after a group of current and former swimmers filed a Title IX lawsuit. That suit escalated in January when the swimmers posted a $360,000 bond to show that they were serious in their plans to fight the case. A judge in that case in December granted an injunction preventing the school from cutting the women’s swim team.

The student-body, according to federal data, is 46.4% male and 53.6% female. That gap between gender participation and gender enrollment comes to about 10 student-athletes, which is the number of male tennis players who lost their program.

The school justified the cuts by saying that the estimated $5 million in estimated savings would help close a $65-$70 million estimated budget shortfall brought on by the cancellation of the football season. After the announcement to cut, however, the Big Ten did wind up having a football season, with Barta reiterating last week that he thinks the department was still facing a $50-$60 million budget shortfall.

Among the fallout was the NCAA pulling the hosting rights to the men’s NCAA Championship meet from the University of Iowa for 2021.

Iowa was one of two Big Ten schools to announce cutting their swimming & diving programs this offseason, along with Michigan State.

Dartmouth (men & women), William & Mary (men and women), and East Carolina (women, but not men) have all also reinstated their programs in the past few months after Title IX lawsuits.

The shady data manipulation by Barta and University of Iowa in this case is unbelievable. Cheers to the young brave women who hired a good attorney and challenged it. “University’s EADA report reveals an undergraduate student population of 10,010 male and 11,546 female students, representing a student body that was 46.4% male and 53.6% female. That year, the University reported 382 male athletes. Though the nominal figure reported by the University shows 409 female athletes, changes to the EADA reporting rules required it to disclose that fifteen of those “female” athletes were in fact male practice players: ten in women’s basketball, four in women’s soccer, and one in women’s volleyball. Id. at 103–04.4 Thus, according to the University’s disclosure, the… Read more »

Sadly this changes very little. The administration is simply giving a “wink and a nod”…. The title IX lawsuit goes forward and because of this, leaves the program with the same uncertainty as before. Those who are going to transfer will transfer and no recruit in their right mind would come into a program whose future is completely uncertain. This is the administration playing games… So what else is new…. right!

3
0
Reply
Time For Barta To Go
Reply to  David

I’m thrilled the women’s team is back. Would love to see the men’s team reinstated too. The home of the butterfly should have both!!

I’m quite happy about this yet upset it takes legal threats / legal actions to get Barta & Harreld to not be manipulative and incompetent.

I’ll have more to say on this later since I have already said a lot.

Need a new coach for that womens team as well. One that cares about rebuilding and not just skating by. No reason that facility can’t have a dominant team. Need a coach that understands the politics of collegiate athletics and is willing to get to work.

What are the penalties for title 9 violations, specifically if a team does have a disproportion number of men to women athletes.

There has to be a point where it’s cheaper for the school to pay the penalty then add a team.

It’s not quite that simple.

For one, they can lose their federal funding, which hits the academic side and creates an existential crisis for the whole university.

Further, with the court relief of an injunction forcing them to pause the cutting of the program, if that’s ignored, it can lead to additional civil awards and even criminal charges for ignoring the injunction.

I’m not sure how big the pool of potential litigants who could sue the school for not complying would reach. Certainly every current member of the Iowa women’s swimming & diving team could sue. Could every female athlete sue? What about every student, claiming a hypothetical lost opportunity? Not sure, but I would imagine that the civil payouts… Read more »

As i’ve said, women’s teams will be reinstated which is good. Title IX negatively affects men’s teams. Michigan State will be forced to do the same. Guys, you are sh*t out of luck.