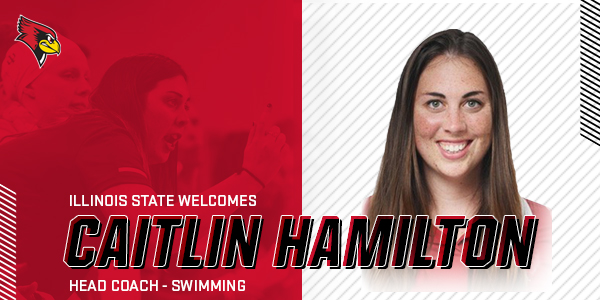 Hamilton is a familiar face in the Illinois State area – she’s a graduate of Normal Community High School in Normal, Illinois, which is where Illinois State is based. She’s got a strong swimming legacy in the midwest: Hamilton was a student-athlete All-American at Purdue, and went on to serve as an undergraduate assistant there. She also coached at IUPUI before taking the Indiana job. She’s been with the Hoosiers for the past two seasons, working with both the men’s and women’s programs.

Illinois State had an opening after Scott Cameron stepped down last month to pursue other opportunities. He’d been with ISU for four seasons.

Hamilton’s hiring is another step for the sport in addressing its gender disparity in coaching positions. Last year, swimming & diving both received “F” grades from the Tucker Center for Research on women coaching women’s teams at the NCAA level. The lack of female coaches in the NCAA (and the resulting lack of eligible female coaches for Team USA appointments) has been a big topic of conversation in recent years, and earlier this year, we compiled a list of all the Division I female head swimming & diving coaches we could find, coming up with only about 27 names.

The NCAA coaching carousel continues to turn as jobs fill up. The Stanford men’s head coaching opening is easily the biggest job still open, but UNC still has an opening, as does Princeton. Meanwhile Indiana and Arizona are each in need of multiple assistants, and Cal and Tennessee both need to replace departing assistants as well. You can check out our NCAA coaching update from last week here.

RIP Indiana omg… are some of the recruits gonna decommit?

If you picked a school based on an assistant coach, you made the wrong choice anyway.

She did a terrific job with IU! Going to be a great head coach! Congrats!

This is more of a win to IU than a lose.

Ya can’t make a comment like this and not say anything else. Swimswam, can you get rid of this clown?

Real brave posting a vague comment like this under a pseudonym. I think it’s obvious that Ray would disagree with this statement, otherwise she wouldn’t have remained on his staff until she got a head coaching job. Women are drastically underrepresented as coaches in NCAA D1 swimming in general, let alone in head coaching positions.

I think it’s a win for the sport of swimming, and for the swimmers at Illinois State. She seems like a great coach with many people who respect her. One of my swimmers is going to be a freshman at Illinois State in the fall and I’m excited to see how she swims for Caitlin and the rest of the coaching staff there. … Read more »

As long as the coaches leaving are happy. It’s their life so I hope they are happy and have success at their new jobs.

Awesome! In so many ways. Congrats!

I wonder if this is why Ray Looze withdrew from the Stanford position (I think I read that somewhere?? correct me if I’m wrong…) The loss of 3 great assistants is already pretty tough, I think he realized losing the head coach on top might be too much of a burden on the program

Uhhh I dunno. I’m not sure coaches think that way. Afterall, most new head coaches replace most of the assistants anyway.

Ray Looze never interviewed for the Stanford job or applied for that matter.

looks like I had some incorrect info! Much respect for you/your family

That’s weird, because he told me that he did. 🤔🤔

Interesting. I too heard that he was offered the job and turned it down because of a low salary considering the high cost of living. Maybe they reached out to him unsolicited.