How Much Faster Are the 2013-2014 Division I NCAA Championship Qualifying Standards? 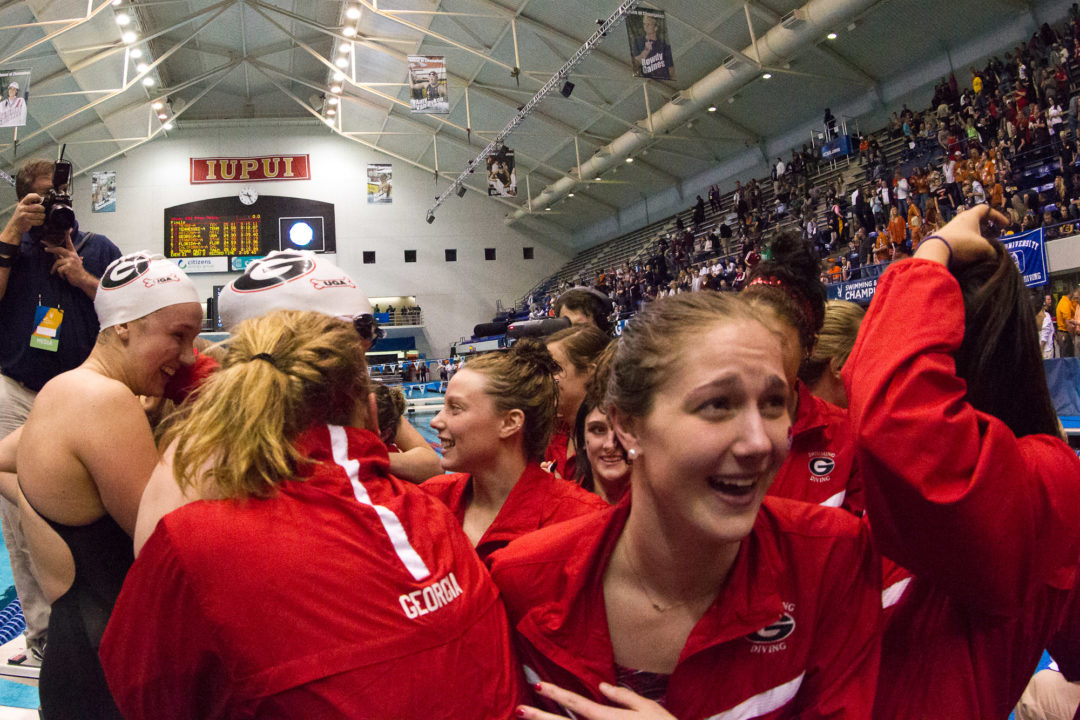 As the Georgia Bulldogs try to defend their title, every single A standard got tougher for next season. (Photo: Tim Binning/TheSwimPictures.com)

Ironically, the Rice Owls, the only D1 state in the team that regularly trains outdoors, have only missed 2 days of training because of the weather.

The Division I NCAA Championship qualifying standards for the 2013-2014 season got almost exclusively faster, as they usually do. The question is, how much faster?

Almost every A-time got better, aside from a few of the men’s events (the 100 free, 200 back, and 200 fly). The men’s 100 free cuts getting a little slower, for example, was probably warranted: only two swimmers had the A-standard going into NCAA’s (and only three more cleared it even at the national championship meet). The 200 back and the 200 fly were a little more filled out.

The B-times largely stayed the same. This means swimmers who get invited to the meet in any event will have no more trouble swimming their bonus events than they did last season.

Hitting that automatic, now-you-can-train-all-the-way-t0-NCAAs-without-shaving-or-tapering time, though, has gotten much tougher. These are significant in the level of control a coach is able to have over a swimmers season, whereas in the NCAA, usually the seasons-end is dictated by lots of moving pieces. The A standard is one of the few qualifying certainties.

This difference becomes even more significant with swimmers unable to rely on relays to earn their individual swims as well; beginning last year, relay qualifiers didn’t get bonus individual swims unless they earned their way into the meet individually.

Speaking of relays, those times got much stiffer as well. This was needed after last year, where even in an event like the men’s 800 free relay, where historically entries are hard to come by, there were 30 relays. That’s probably a few on the high side of where most would like to see in order to keep this an elite, NCAA Championship-level event.

See the full changes below, with the numbers in parenthesis indicating the change from last year’s times.