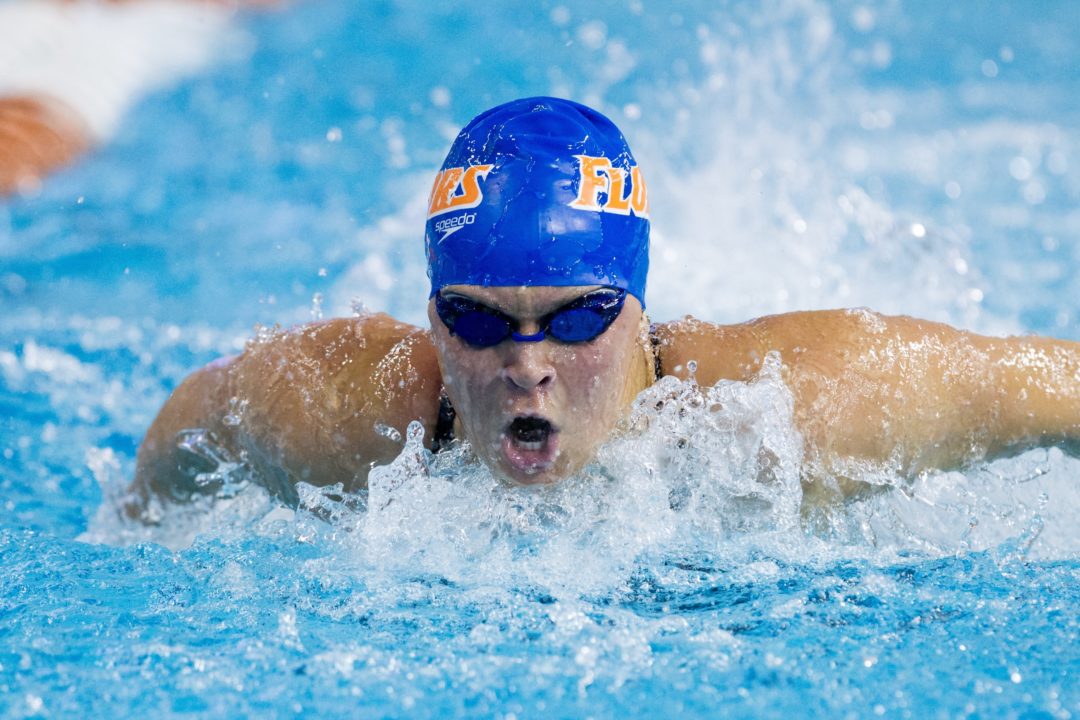 Elizabeth Beisel, along with a number of others, scratch from finals after Day 1 Prelims. (Photo Courtesy: Tim Binning/TheSwimPictures.com)

Amy Bilquist on Swimming 200 Back: “I protested it for the longest time”(Video)

Bilquist won another 200 back in Match #5, this time going 2:01.29. She says the biggest adjustments she’s made are all mental

Versatile Katherine Helms from Mason Makos has announced her verbal commitment to the North Carolina State Wolfpack for 2022-23.

The reason LA didn’t select backstroke for the men’s skins: Guilherme Guido. He continues his dominance here with another 100 back win

After a morning of fast prelim swims on Day 1 of the 2013 World Championship Trials and U.S National Championships, several swimmers have decided to scratch.

The main surprise scratch of the day came from the 200 Butterfly.  Though this event, for neither the men nor the women, saw too many scratches (especially since the men had ZERO scratches from this morning), we were in shock when Elizabeth Beisel, who would have been placed 6th in the A-Final, scratched. In order to focus her drive and energy on her later events this week, Beisel has decided to give up her spot in tonight’s A-Final.

This means that 17-year-old Megan Kingsley will be taking her spot in tonight’s final swim. Kingsley, who moved up from her 12th spot seed to 9th at prelims (though her time was up a little bit), will join the top heat with big names like Cammile Adams, Becca Mann, and Maya Dirado.

The women’s 100 freestyle also brought a few scratches, the main shock of this race being Dana Vollmer. Vollmer, who finished 11th at prelims after being seeded 7th, will be saving her energy for her butterfly swims, which she is seeded first in (seeded almost 2 seconds ahead of second seed Claire Donahue).

Rachel Bootsma, who finished 25th in prelims, will be using her power later in the 50 and 100 backstrokes, where she’s seeded second in both behind Missy Franklin. If she turns on the energy and strength that we know she has, she could very well make the spot on the World’s Team in those events.

We saw a few surprises this morning in this event as well, which just goes to show how merciless and unpredictable (and down-right exciting) the 100 free can be sometimes. Cullen Jones, who was seeded second behind Olympic teammate Nathan Adrian at the start of the meet, ended up in the 18th spot after prelims. After coming into the meet with a time of 48.46, and going through prelims at 50.07, Jones has decided to scratch. He’ll later be swimming the 50 freestyle, in which he’s seeded first. He has the power and energy to sprint that 50, giving him a better shot of qualifying in that event.

Other scratches from this morning include Michael Klueh, Dax Hill, and Ryan Murphy. Klueh, who finished 12th after prelims, is known for his strength in the mid-distance/distance freestyles, and will be competing in the 200 (6th seed), 400 (3rd seed), and 800 (5th seed) later this week. Hill, after placing 14th in prelims, will be coming back to swim the 50 free and the 200 free (14th seed/13th seed, respectively). Though Murphy had a time drop from his seed time to prelims (seeded with a 50.77/prelims was a 49.96) taking him from 32nd to 17th, he seems to be saving that power and energy for his later events, especially the backstrokes. He is seeded 4th in each backstroke event (50, 100, and 200) and has a better chance of getting into the top heat for finals.

Can’t really argue against any of those scratches.

I agree but call me stupid if you want, why have they swum in the prelims? Just to take a bath or more seriously just to have a confidence-building swim for the rest of the week? If it was for that last reason I believe it’s a big success for Ryan Murphy and Charlie Houchin.

You swim in prelims to
A) get into the meet – you’re right gain confidence
B) give it a shot – if you make top 8 and have a shot at the relay – then you swim. If you don’t, you scratch and wait for later events. Why waste the energy.

You never know unless you try

I suspect it’s partly to settle in and get a feel for pool and blocks under racing conditions. And with the 100 and 200 free prelims, there’s a certain ‘there is always going to be a surprise or two in who makes the relay pool; maybe that surprise could be me this time’. Then if you’re out of contention for a relay spot in that event, you move on to an event where you can still qualify.

I agree, i cant see too many folks who want to make the team wasting energy in the B finals of races.