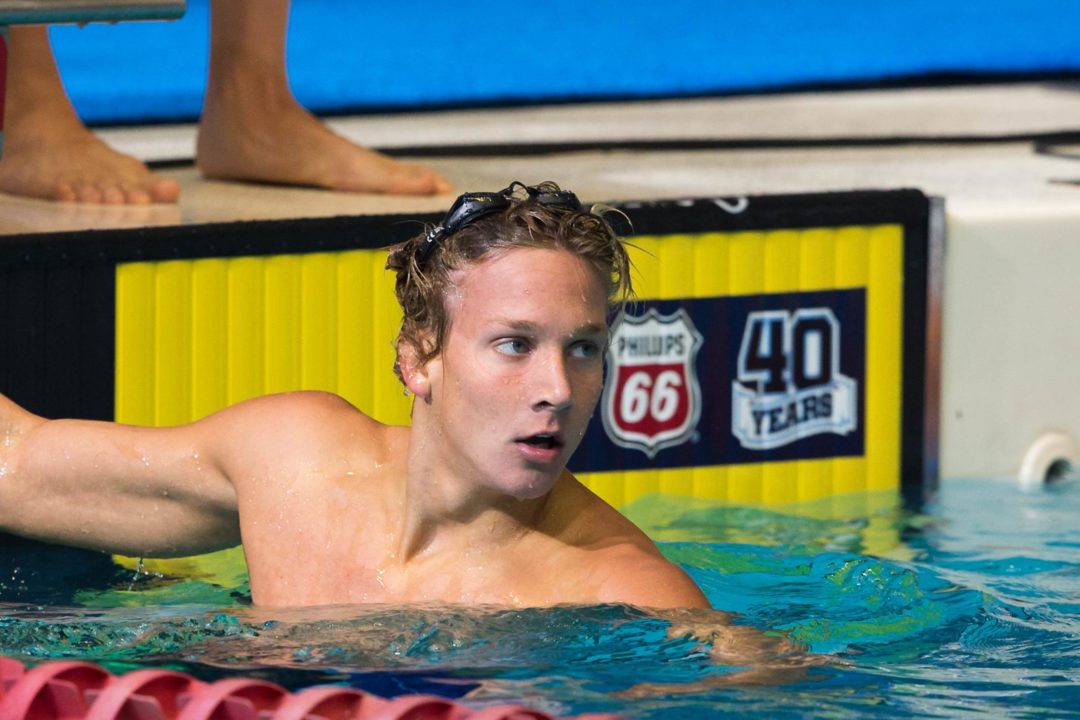 Bolles 16-year old Caeleb Dressel has broken the National Age Group Record in the men’s 100 free as another one of the glory age group days of the late 80’s/early 90’s goes by the wayside.

Dressel swam a 49.63 in prelims to break the 1990 record set by Cincinnati legend Joe Hudepohl that had been 50.24. This makes Dressel the youngest swimmer in U.S. history to swim into the 40’s in this race, and he’ll still finish out the summer as a  15-16.

His previous personal best was 50.85; that’s a huge drop, but won’t surprise many in the Bolles camp. We spoke with many around that group this week who were all-but-guaranteeing this record, saying that Dressel has been training really strongly.

Though he trains with Bolles, Dressel is one of the rare part of that club program that doesn’t also swim for the High School, as he attends nearby Clay High School. He trains directly under Jason Calanog. With open contact beginning for college coaches on July 1, the senior-to-be has left a brilliant final impression for coaches trying to identify the top targets headed into the fall.

Congratulations to Caeleb and Sergio! Dressel made it look easy and made it to top 8 tonight. Could come down even more.

That would be crazy if he made worlds on a relay. Congrats to him

Don’t expect too much from him in the final. I don’t know if he will be faster tonight. His championships are already successful. It’s a shame he doesn’t swim the 50 free this week. He could have swum around 22.50.

Give some credit to Jason Calanog, who is actually Calaeb’s coach.

thanks for letting everyone know!

Congrats to the whole team and the coaches . Great school and huge talents in the making .

it’s in the dressel genes! caleb’s sister kaitlyn, went 55 this morning! he has a younger sister who’s also exceptional! 3 bolles teenagers break 50, with condorelli and murphy!! WOW!! congrads to the kids and coaches. sergio……..shave!! haha!

Joe Hudepohl is THE Ohio swimming legend. Some thought his LCM record would never be beaten. Nothing is impossible, but It took 23 years to do it. Congrats!

Didn’t follow swimming back then [well, only the Olympics] so my Q that I can’t help but wonder is, If Joe Hudepohl was so much better in his day, and he obviously was, with his record lasting 23 years!, what happened to him?
What type of college career did Joe Hudepohl have?
Thanks to anyone who can / will enlighten me.

He swam for Stanford and also competed on the ’92 and ’96 Olympic teams.

He was top 8 in the 200 free at the 92 Olympics. I think that he finished top 2 at NCAAs over the years at Stanford.

Ray – he won three Olympic medals on relays, including two golds. Was part of a WR breaking 400 free relay at Pan Pacs in 1995. Won a couple of NCAA Championships at Stanford. Not the greatest ever, but swam in the golden age of sprinting and was right there with those guys.