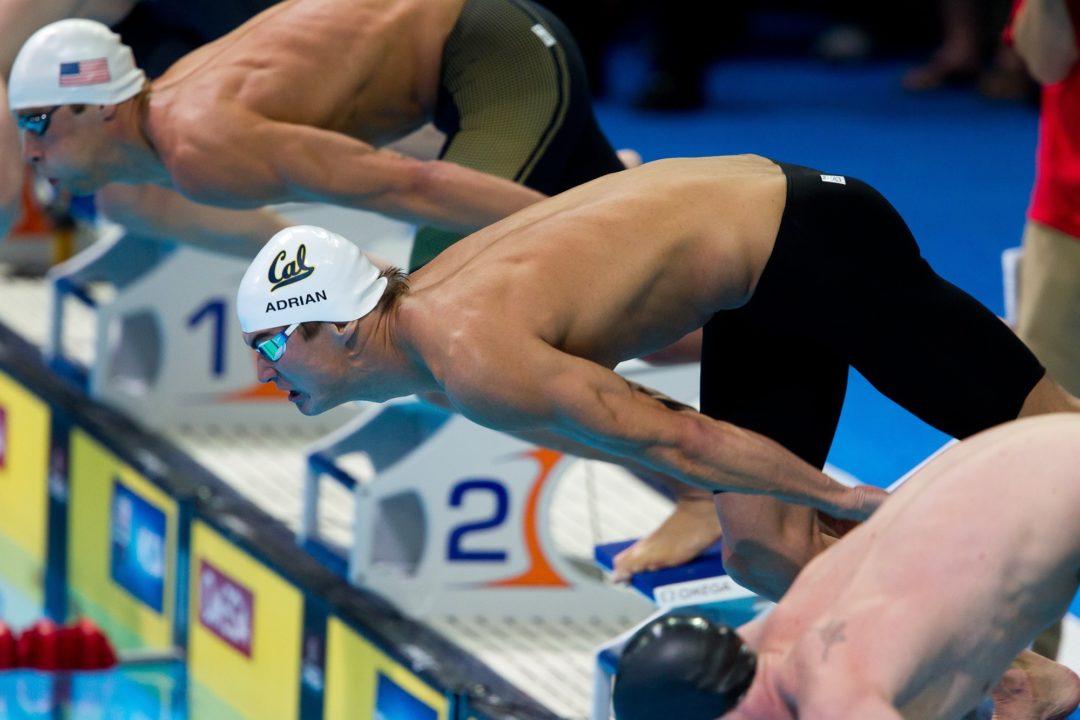 What do we make of this morning, and what can we expect tonight? (photo credit: Tim Binning, theswimpictures.com)

With the first night of World Championship Trials kicking off in just less than an hour, many of us (myself included) are still trying to digest a very eventful opening session (and not necessarily all for good reasons).  While the sprint freestylers came to play, the men’s and women’s 200 butterfly events showed Team USA has some big holes to fill on the international stage.  Before we make some last-minute picks for tonight, here are the biggest stories from the morning…

We knew the 200 fly field was going to be thinner than years past; Kathleen Hersey and Teresa Crippen aren’t entered in the meet, Kim Vandenberg appears to be past the stage of training full time, and Kelsey Floyd is coming off pretty serious surgery.  But I don’t know if anyone guessed the field would have fallen off this much.  Nobody swam under the FINA ‘A’ standard this morning, and the 8th and 16th place times are the slowest they’ve been at a major U.S. championship since 2007.

So what does that mean for tonight?  Looking through the procedures for FINA and USA Swimming, to qualify for Barcelona, you must be a top-two event finisher, and meet the FINA ‘A’ standard (2:09.38) after July 1, 2012.  So far, only Camille Adams and Jasmine Tosky have gone under that time.  If one of the other six swimmers in the A-final tonight takes one of those top two spots but doesn’t hit the ‘A’ standard, it could be the first time the Americans haven’t taken two swimmers in an individual event in… forever?

After developing over the last few years into arguably the best mid-distance swimmer in the world, Allison Schmitt has looked a little bit off all season.  Despite leading her Georgia Bulldogs to an NCAA title, Schmitt was well off her best times from the 2011 short course season, and she still appears to be off her game, adding almost a full second from her seed time to get stuck in the 100 free B-Final tonight.  Although there’s a large gap between her and the field in the 200 free, if she doesn’t right the ship, Missy Franklin and Katie Ledecky could steal the individual spots in that event.

What about Cullen Jones?  The veteran sprinter finished a disappointing 18th this morning, and actually failed to break the 50-second barrier.  While this could seem like a cause for alarm, this actually isn’t the first time Jones has had a poor 100 preliminary swim at a big qualification meet.  He has previously failed to make the A-final at Summer Nationals in 2007 and 2010, putting up so-so preliminary times (including a 49.86 in 2010) before rebounding later in the meet to finish top-two in the 50 freestyle.

I didn’t check meet results until I got to the office today, and pretty much had this reaction when I saw “Dressel, Caeleb, 16, 49.63” on live results.  Dressel dropped the hammer, smashing Joe Hudepohl’s old NAG record of 50.20 and sneaking into the A-Final in what is otherwise an “old man’s” race (Jimmy Feigen is the next youngest in the heat at 23).  How fast is 49.63?  That time is already good for 5th on the 17-18 list.

On the men’s side, the top six names shouldn’t come as any surprise: each of them has represented Team USA in this relay at the Olympic games, with the top three seeds all boasting individual Olympic gold medals (Nathan Adrian, Anthony Ervin, and Matt Grevers).  While we can expect Adrian and Ervin to take it out fast tonight, watch for some crazy closing speed from Ryan Lochte and Ricky Berens.

Not to be shorthanded because of their mid-afternoon timing, we wanted to give a quick update of where the women’s 800 and men’s 1500 frees sat headed into the finals.

The heats began at 4PM local time, and featured the first three heats of women’s races and the first two heats of the men’s races. Unlike other events in this meet, these are not circle seeded, so the fastest 8 swimmers in each heat will go in the finals session after the 200 fly and the 100 frees.

Zane Grothe of Auburn cut almost 10 seconds from his seed to take the top spot in the early men’s heats, finishing in 15:29.81.  Seventeen-year-old Liam Egan was the closest behind, dropping 11 seconds to touch in 15:33.79.

Alicia Mathieu posted the top time in the women’s 800, building to a strong finish out of lane 8 to finish in 8:32.80.  Open water specialist Emily Brunemann proved she can still get it done in the pool, too, dropping three seconds from her seed to finish in 8:35.83.

We know since last year she’s the future American star on butterfly. Perhaps under 2.10 later in the summer? Very possible.

She would have been top six finisher, not else to say

Jackson Wilcox and Brennan Morris were on the American team in Rome, although none of them advanced to the finals.

Whew! Two women under FINA “A” standard… but only two.