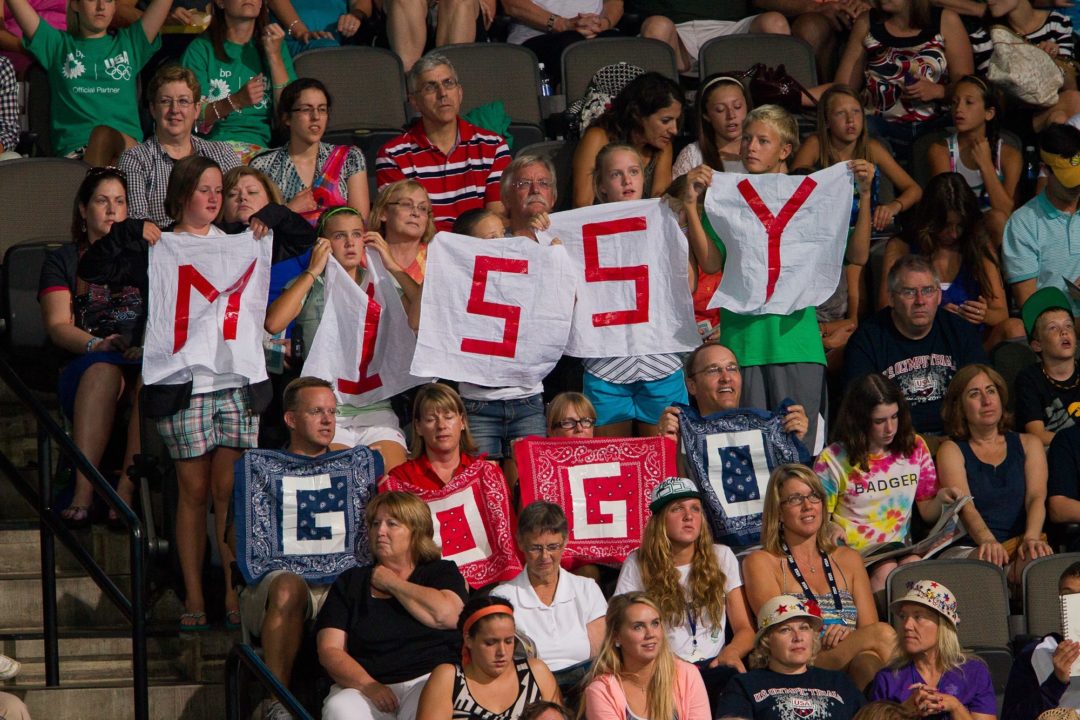 Missy Franklin broke her own National Age Group Record on the first finals session at the 2013 US World Championship Trials (Photo: Tim Binning/TheSwimPictures.com)

When you have four Olympic gold medals and three World Records, USA Swimming National Age Group Records aren’t exactly at the top of your resume.

But with a best time (and every best time in this event between now and May 10th, 2014) in the final of the women’s 100 meter free at the US World Championship Trials on Tuesday, Missy Franklin broke her own National Age Group Record.

Her 53.43 broke the old National Age Group Record of 53.52 from last year’s Olympics, and also broke Amanda Weir’s National Championship Meet Record of 53.58 from all the way back in 2006.

This was a classic Franklin swim, saving things until the very end. Despite the race appearing to come from the middle of the pool, Franklin snuck in for the win and her first two World Championship qualifications.

Not surprised; Franklin has been strong and consistent all season. Her NAG and PB is also getting very close to Coughlin’s textile AR which is I believe 53.2 or 53.3. Given that this was several tenths faster than her Olympic Trials time last year, she could be down close to 53.0 and in the mix for a medal by the time Barcelona rolls around, but it may depend on what the schedule is there compared with here.

I admit to being a bit surprised about Missy’s time. I don’t believe she is fully tapered since her goals were already in Barcelona. In any case, her qualifying was obvious in many events.

I think Missy just showed potential for being 53 flat or even under in 100m free. I am sure Kromowidjojo could not foresee how the level of Women’s 100 free will evolve considering it’s post-Olympic year. After the Worlds, Franklin should decide what to do with her talent and unleash it in a more focused fashion.