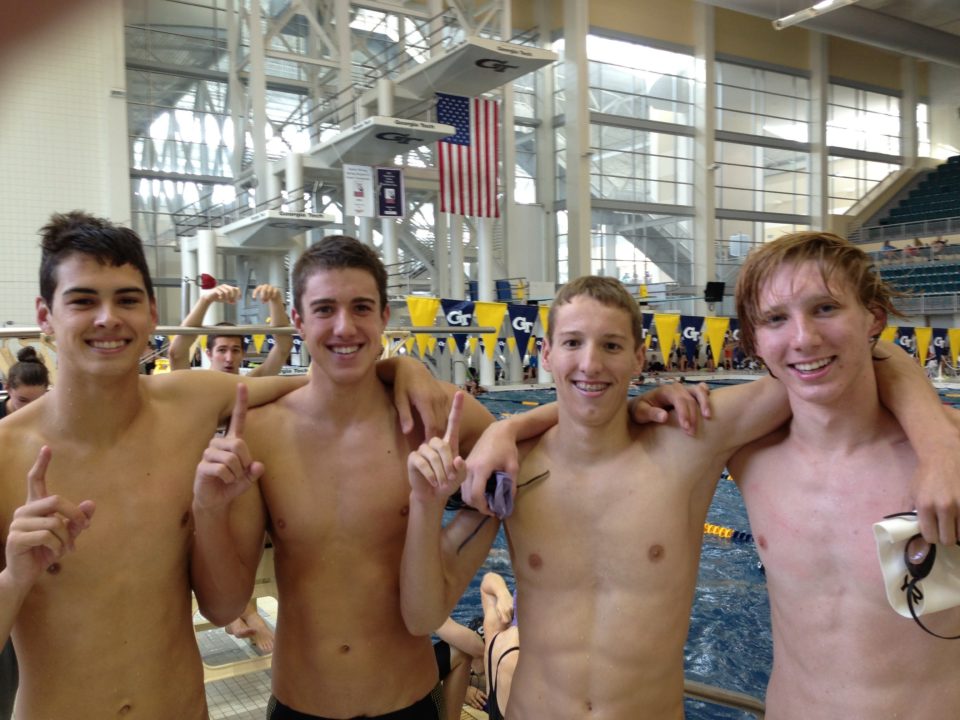 YMCA swimming has officially given us a reason to not be “overlooked” (not meant in a negative way) by the rest of the swimming world.

Each member of this relay is 16-years-old. From the lead-off, Maslowski was ever-so-slightly behind the team from Suncoast, splitting a 24.41. Carson took the second spot, splitting a 24.23, pulling the team to an even field, but slightly behind teams from Middle Tyger and Somerset Valley. Kohut pulled ahead with a split of 23.97, giving anchor, Ellington, some room for the lead. Ellington (the national champion earlier in the meet in the men’s 200 m freestyle) drove to the finish to touch in with a split of 23.30. The final time of the race was 1:35.91.

This put the team only .11-seconds ahead of second place Middle Tyger, though they dropped almost 3-seconds from their seed time.

The team will compete tonight in the championship heat. The national MEET record, also held by Triangle Area, is nearly 2-seconds faster than the time the men posted today. Could we possibly be seeing a new meet record, AND a newer NAG record tonight?

The previous NAG record was held by the Kamehameha Swim Club from Hawaii, ’12. Ironically, the coach from Kamehameha was roommate’s with Triangle Area’s coach Chad Onken. Coincidence? Obviously, something the two coaches are doing is working.