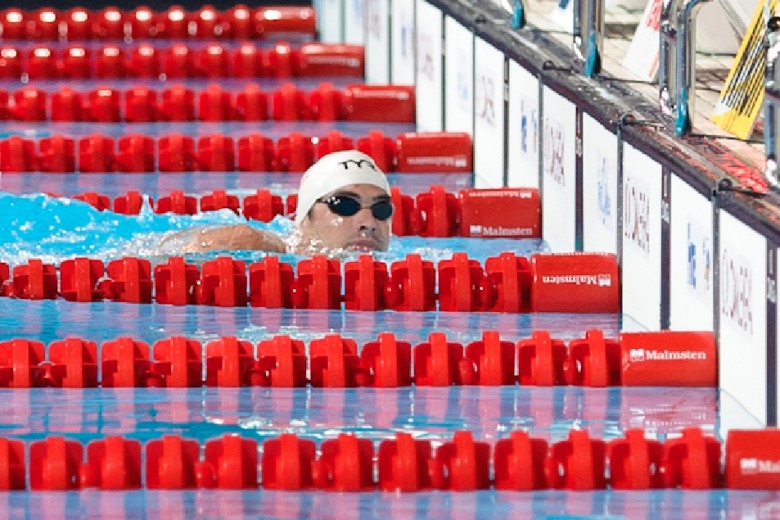 Ricky Berens and Team USA looked good in prelims of the 800 free relay, but there will be a few factors working against them in finals. (Photo: Victor Puig/victorpuig.com)

Day 6 is the most loaded of the finals sessions from the 2013 FINA World Championships in Barcelona, Spain with 9 events all together, and 5 of them being medal finals. Here’s a look at which events happen on Friday night at the Palau Sant Jordi:
Women’s 100 free FINAL
Men’s 200 back FINAL
Women’s 200 back SEMIFINALS
Men’s 50 free SEMIFINALS
Women’s 200 breast FINAL
Men’s 100 fly SEMIFINALS
Women’s 50 fly SEMIFINALS
Men’s 200 breast FINAL
Men’s 800 free FINAL
A reminder of all the links you need to follow the action can be found here.
All of the finals tonight have some significant level of intrigue for one reason or another. The women’s 100 freestyle has the suddenly-contending Sarah Sjostrom from Sweden, who took the top seed in the semifinals ahead of the likes of Ranomi Kromowidjojo and Cate Campbell.
Sjostrom, in going a lifetime best in the semis, said that she felt “relaxed” and almost implied that she wasn’t trying all that hard. That could be incredibly dangerous words, given that when swimmers say they’re fast and relaxed, they so often get tight and slow.
Expect Campbell and Kromowidjojo to be very, very fast to the turn, and wait for Sjostrom, the best 200 freestyler of the bunch, to see if she can catch them coming home.
Then in the men’s 200 backstroke, where we’ll see a rematch of Clary versus Lochte from last year’s Olympic final. In London, Clary bolted off of the last wall and shocked the world with how much he had left to take out Lochte in an upset. This year will be more about attrition and who has anything left on the last 50 as much as it will be who can explode off of that last 50.
In the women’s 200 breaststroke, we already saw a World Record in the semi-finals from Rikke Moeller-Pedersen, but with Russia’s Yulia Efimova lurking, and having done the third-best time in history in the semis already, the Dane will need to be on her game again. Perhaps these two will push each other to yet another World Record breaking women’s breaststroke swim at this meet.
The men’s breaststroke races haven’t seen a World Record yet, but if there’s going to be one, expect it in this 200 breaststroke. There, we’ll see two men who have broken the World Record in the last year, Akihiro Yamaguchi and Daniel Gyurta, square off with a group of swimmers who all look incredibly fit for the challenge.
The session will close with the men’s 800 free relay; the Americans, with Conor Dwyer swimming well and Charlie Houchin putting up an incredible sub-1:46 split in prelims, look like huge favorites, but the Russians should still have something to say about the outcome.
The only little hitch in that 800 free relay could be Ryan Lochte, who is swimming a triple on Friday evening. He will start with the 200 back final, then go to the 100 fly semi-finals (which he just barely slid into), and finish with this 800 free relay. He’s still probably in good enough shape to handle that, but it would be good for the Americans to give him a lead going into the anchor leg of the relay (if that is, in fact, where he ends up).

So a question for you, fellow swim fans. I have got almost no work done all day, I’m a nervous wreck, and it’s still 90 minutes until the finals start. Is supporting your national team swimmers this stressful for everyone, or is this just a Danish thing? I guess when you have so few eggs in the basket to start with it’s harder to see even one or two broken.

You’re definitely not the only one!! I’m even trying to spread swim fever round the office.

By the way, I am fully supporting your countrywoman, Rikke Moeller Pedersen, and I am totally against that russian swimmer, Yulia Efimova.

A bit connection problems so I hope I’m not too late to hope you are still alive! Just relax. I’m always for swimming so I must wish a tight race but RMP is my pick and wish for gold.

You should’ve seen me before the men’s 4x100free relay…. I was die-hard rooting for Australia, and I’m American…