Male Sprinters Put on Top Performances in Morning 1 at 2013 US World Championship Trials. 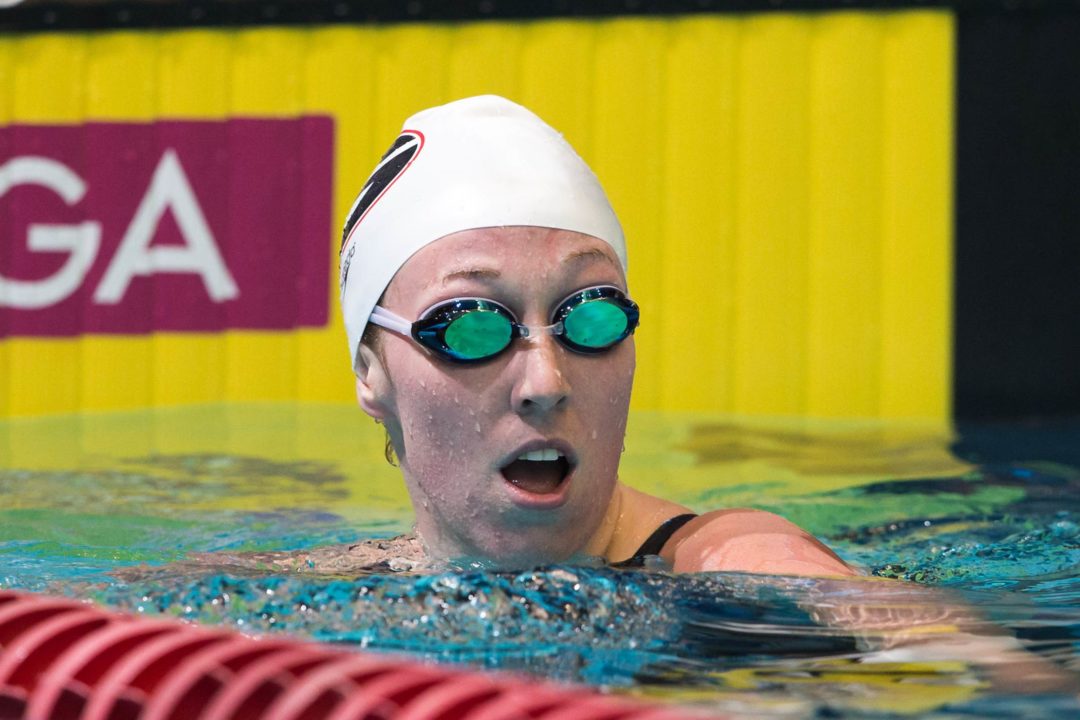 In a shocking women's 100 free prelim, Shannon Vreeland snuck in for the top seed with a lifetime best. (Photo: Tim Binning/TheSwimPictures.com)

While no actual spots in the World Championship lineup will be handed out on Tuesday morning, with some deep and incredibly tight fields in the 100 freestyles, plenty of spots can be lost. There’s no semi-finals at this year’s Trials, unlike the Olympic Trials last year, so the sprinters need to get out of the gate fast.

The day 1 events will be the 200 butterflies, the 100 freestyles, and then the Olympic distance events. Those distance races are set to begin just before 4PM Eastern time and will be swum in timed final format.

As a reminder, here’s all of the links you’ll need to follow this week’s U.S. World Championship Trials.

As expected, this women’s 200 fly, sans Kathleen Hersey, looks like it’s going to be Cammile Adams, and then everybody else. The Olympian, who is swimming on a new found level of confidence,  swam a 2:09.88 to take the top seed in the women’s 200 fly. That’s about a full second slower than she was in prelims of last year’s Olympic Trials, but she’s in a much better position as the favorite this year .

The young Becca Mann showed the closing speed that she’s becoming famous for (and demonstrated at open water Trials) with a 2:11.26, gunning down Elizabeth Beisel (2:11.63 – 6th seed) at the end of the 4th heat in this event.

There’s a lot of non-traditional butterfliers in this final, and they’ll have to really step on the gas; the FINA A-cut is 2:09.38, and nobody made it in prelims (though expect Adams to easily clear it in finals). Among the other more unusual names in this final are Maya DiRado (2:11.37 – 3rd), and Caitlin Leverenz (2:12.20 – 8th seed).

Young South Carolinian Megan Kingsley was the 9th seed in 2:12.28, but was bumped up to the A-Final when Beisel scratched.

Much like the women’s race, this men’s 200 fly is showing a bit of a gap, though this one is much more easily explicable by the “Phelps vacuum” (if you can’t beat him, pick a different race).

The final, though, will include a group of swimmers who perhaps lived for a long time in Phelps’ shadow, but in any other scenario would be pretty big stars. That includes the top seed, Bobby Bollier (1:57.35), who as recently as 2011 was a US National Champion in the event.

Also into the final is Cal’s Tom Shields, who was a 1:58.34 for the 5th seed. That’s half-a-second better than his lifetime best, which tells us two things: he may not be the 100 fly, one-trick pony that many have made him out to be, and he’s got a serious chance at winning either the 50 or the 100 fly later in the meet.

Finishing out the top 8 are Andrew Seliskar, the high school swimmer from NCAP, in 1:58.35, and Phelps’ former training partner Chase Kalisz in 1:58.62 as the 7th seed.

Indiana’s Stephen Schmuhl was 9th and will be in the B-Final tonight, meaning that he will likely now have to focus on the World University Games. He did crack two minutes for the first time in his career though (1:59.60), so he looks strong for Kazan.

The men also had nobody under the FINA A time, but one would be less concerned about this men’s field getting there than the women’s.

After a wild women’s 100 free prelim, there are huge surprises – as much who won’t be in tonight’s A-final as it is for who will be.

Allison Schmitt (54.87) and Lia Neal (54.89), who were both on the Olympic final 400 free relay last year, were 9th and 10th respectively, and barring scratches won’t have a chance to swim in the A-Final.

The question remains, then, is there a World Championship 400 free relay for the Americans in that top 8? If they do, it will perhaps be a relay without much experience in this event on the international level.

Georgia Bulldog Shannon Vreeland was the top seed in 54.24 – half-a-second better than her previous lifetime best. She’s a very good 200 freestyler, and was on that Olympic relay, and like her former teammate Schmitt is adding a very good 100 to it as she matures.

Behind her is Natalie Coughlin, who now training with Nathan Adrian and Anthony Ervin primarily under the guidance of Dave Durden is seeing a resurgence in her career. She’s the 2nd seed in 54.34. That’s an outstanding result for her at any age, but at 30 is particularly impressive.

The experience level drops off quite a bit after that, however.

Arizona’s Margo Geer is the 3rd seed in 54.39; she’s been an absolute star in short course and now looks to be having that same breakout in long course. Just behind her was heat 5 winner Megan Romano in 54.40.

After that came Missy Franklin, who won heat 7 but was dangerously close to missing the A-final herself with a 54.55. Jessica Hardy breathed a huge sigh of relief when that 7th and final heat (that included Franklin, Schmitt, and Dana Vollmer) was a slow one, as it solidified second-life for the Trojan Swim Clubber in 54.70.

Cal’s Liz Pelton, who’s riding a hot streak this summer, was 7th in 54.78, and Young Houstonian Simone Manuel was the 8th seed in 54.83. That shows just how close the Americans were to losing another member of that 400 free relay in Hardy.

This men’s 100 free went much more according to script, with training partners Nathan Adrian (48.64) and Anthony Ervin (48.72) taking the two top seeds.

Ervin’s swim was a very controlled one, which shows that he’s hitting his pacing exactly at the right moment. That’s a best time for “Ervin 2.0” (aka, since his nearly decade-long retirement). He and Adrian closed in identical second 50 meter splits.

The man closest to breaking up that friendship at the top is Matt Grevers from Tucson Ford, who was 48.96 for the 3rd seed. This will be a race for veterans, as Texas pro Ricky Berens was 4th in 49.05.

The effect of training together showed itself heavily in this first session; another set of teammates finishing tightly together was Berens and his teammate Jimmy Feigen, who was just behind in a 5th seed of 49.15.

Ryan Lochte and Conor Dwyer went 6-7 in 49.17 and 49.30; until very recently, they were training partners as well. Lochte left himself a huge hole after a 50; among the top 8, he was the slowest to the turn, and the fastest coming home. Perhaps that means that we can’t read too far into his total time.

Caeleb Dressel from Bolles snuck into the A-final in 8th place with a new National Age Group Record of 49.63, breaking a 23-year old mark of 50.2 held by Joe Hudepohl (read more about that record here).

The high school senior will be the lone scholastic swimmer in the A-Final, and gives the American sprint group some hope for the future as the young U.S. sprinters have struggled as compared to the rest of the world.

Bolles-affiliated swimmers were sharp in this race. Charlie Houchin was the 9th seed in 49.64 (he represents his IX3 professional program, but trains at Bolles), and Santo Condorelli was 10th in 49.71. That’s a best time for the middle-distance oriented Houchin.

Their backstroke-specialist teammate Ryan Murphy was 17th in 49.96. That’s a solid start for him as it’s a lifetime best by eight-tenths of a second, though remember that he didn’t swim this event at any of the big championship meets in his 2012 breakout season.

The top 17 were all under 50 seconds, which is impressive given the thinner field as compared to last year’s Olympic Trials.

Can we appreciate the fact that Erika Erndl is still swimming and still swimming WELL? She’s 35 years old and trains with a master’s team (I think). She coming back tonight in the B final of the 100 free. Let’s just say I am a LITTLE BIT JEALOUS.

David Nolan 49.7 in 100 fr – over a second drop from his entry time. He’s been flying under the radar so far (not sure he even swam at Grand Prix events) but this shows he’s ready. I predict a great 200 IM for him.

Adrian was out a tenth faster than he was in the olympic final. In a morning swim. At a meet he’s probably not fully rested for. The guy has got some speed. Excited for tonight and then his 50. Its also encouraging that Ervin has finally found that second 50.

There is a good possibility to see the whole trio, i.e. Adrian, Coughlin and Ervin, swimming an individual 100m free in Barcelona. I’m sure it would help them.

I was surprised that Allison Schmitt did not do well this morning but then she has not looked so good this year. Natalie Coughlin’s training with Adrian and Ervin seems to be paying off.
Cullen Jones swam so slow this morning but I was a bit shocked at his time…50.07! What is he playing at? I still maintain that he should not have been out and about last Saturday night in Charlotte, it sapped some of his energy. Hopefully he will show some speed in the 50s or else he is going to stay home.
Nathan Adrian is the man to beat, he is swimming well and looks fit. Anthony Ervin too. Dressel is one to watch

No, Braden, the absences of Allison Schmitt and Lia Neal from the A-Final are absolutely not huge surprises. The first struggles since London and the second looked a little sleepy this year in the grand prix. There’s also a little lack of luck for Lia. Last year at the olympic trials she was 8th to enter in final after the semi-finals. This year she’s 10th after the prelims. It’s very close. But I wouldn’t be surprised if she swam much better tonight in the B-Final, at least around 54.50.

Dont forget Josh booth is a good swimmer as well!

What’s going on at 3:45? I saw it over on USA Swimming’s website that session two starts at that time.

Makes sense. Considering they take so long to do, it makes perfect sense.