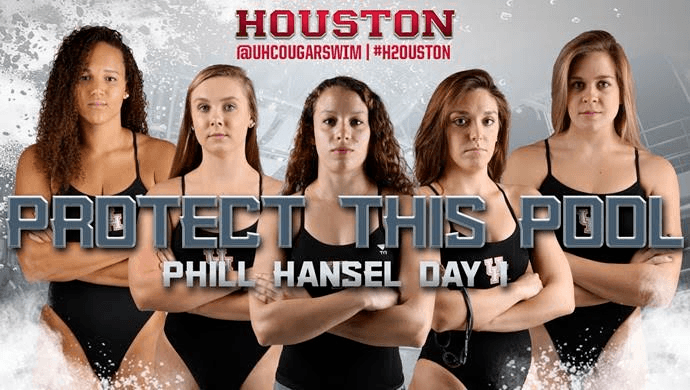 Houston is currently leading the pack with a score of 393.5 after the first day of the invitational. Rice follows in second with a score of 347, and UC-Davis rounds out the podium with 250 points.

The Cougars got started early nabbing a victory in the 200-yard freestyle relay. The team of Cait Horner, Laura Laderoute, Ksenia Yuskova, Michaela Hamrick out touched rivals Rice to finish first with a time of 1:32.41.

In the 200-yard IM, freshman Laderoute captured her third individual first-place finish. The West Linn, Ore., native set the school record, previously set by Reka Kovacs on Feb. 23, 2013, during preliminaries with a time of 2:01.46. During finals, Laderoute improved her school record touching the wall at 2:00.58, a NCAA B standard time.

On the springboards, Micaela Bouter placed first overall in the 1-meter dive. The Johannesburg, South Africa native captured first after netting a score of 321.80. Freshman Lauren Burrell followed in second with a score of 283.15.

In the 500-yard freestyle, junior Ksenia Yuskova grabbed a podium finish placing third overall. The Moscow, Russia, native swam a time of 4:49.09 to round out the podium.  In prelims, Yuskova netted a time of 4:48.13, a personal best, which moves her to fourth in program top-10.

In the final event of the night, the 400-yard medley relay broke a seven-year school record. The team of Eleanna Koutsouveli, Peyton Kondis, Sharo Rodriguez and Zarena Brown topped program best 3:41.65 set on Feb. 24, 2009 after netting a time of 3:41.44. The Cougars finished second overall in the relay event.

“Our challenge now is to continue bringing the same fight for the next four sessions,” Wochomurka said.

The Cougars take to the water for the second day of the Phill Hansel on Saturday morning. Prelims begin at 10 a.m., and finals will begin at 6 p.m. You can follow live results HERE.