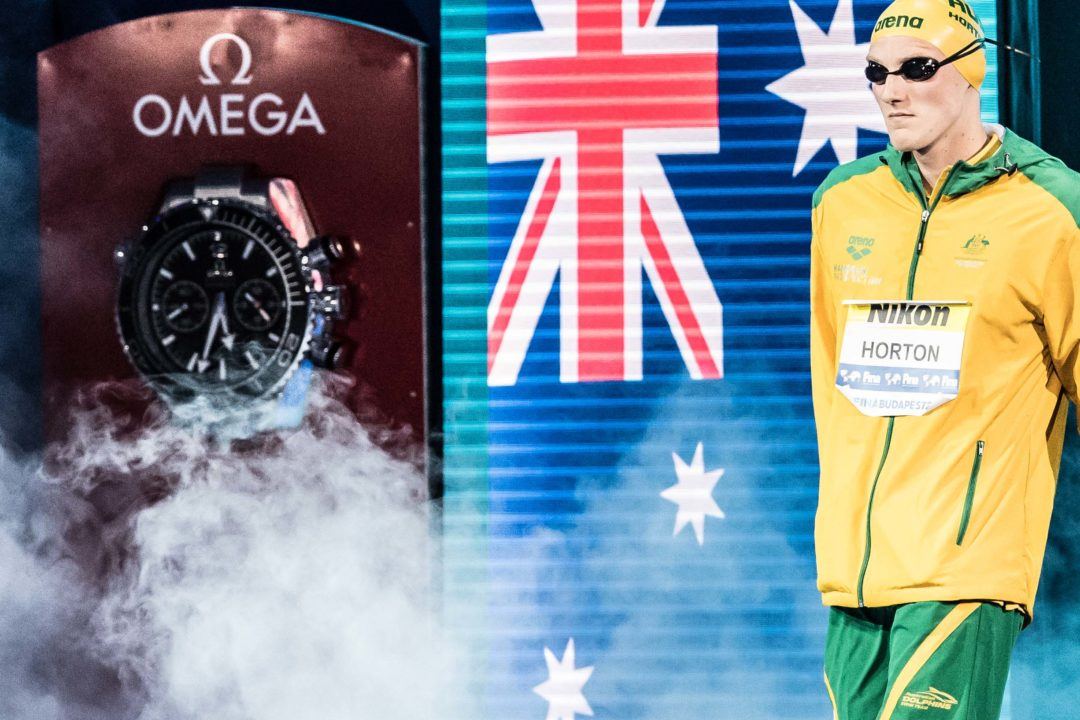 Mack Horton of Australia believes that the 1500 is the 'pinnacle distance event.'

We reported how Australian Mack Horton no-showed his 800m freestyle heat, but now we have more background as to why. Horton, who already claimed silver here in Budapest in the 400 free event, confirmed he has withdrawn from the 800m in order to focus on the 1500m.

The Australian national champion continued, “I haven’t really done a good international 1500 ever, so I just really want to nail that heat, easy as possible, and then try and lift for that final and post a good international time and give Greg (Paltrinieri, the Italian Olympic champion) a run for his money.’’

Horton ranks as the 2nd-fastest Aussie of all-time in the 1500m event, only behind legend Grant Hackett, but the Victorian swimmer hasn’t been able to put a solid race together internationally. He finished 5th in the race in Rio with a time of 14:49.54, well off his personal best of 14:39.54 from his nation’s trials. Had he reproduced that performance, Horton could have earned bronze at the Olympics.

“I don’t rate it as an event at the Olympics because the 1500 is the pinnacle distance event.”

yup. it not even in the Olympics! this guy is always right!

Actually it is in the olympics…

pretty sure that was sarcasm

And an individual gold medal is not a pinnacle medal.

Maybe he didn’t get the news?

I can see where he’s coming from. There is an overload of events in swimming and those with range/versatility have to be selective if they want to produce their best. I know the 800FS will soon be an Olympic event but I don’t believe it should have been included as it doesn’t add a new angle to the program. As an example of how superfluous it is, Ian Thorpe won the 800 in a world record time at the 2001 WC’s and he never even trained for the event!

Yeah, but that was the first time the 800 was an event at Worlds for men. The previous record was a split from Perkins’ 1500 WR, because no international swimmers were contesting it. If someone like Perkins had swum the 800 as its own event, Thorpe wouldn’t have broken that record. Also, saying Thorpe never trained the 1500 is going a bit too far. I’m pretty sure he won the 1500 at junior nationals at least once. And once the men had a year of treating the 800 as a real international event, Hackett smashed Thorpe’s record in 2002. I feel like saying the 800 is superfluous because of what happened in its first year is a little like saying… Read more »

His decision, given his circumstances at this meet, is a correct one ….. his manner of expression leaves a lot to be desired..

Thorpe would have done the mileage to be able to swim a 1500 and he would’ve raced it at certain points as an age-grouper but I think only ever raced it once as a senior. It was, however, never one of his main events or one that he specifically targetted or trained for.

Well, gee, I’m sure there’s another Australian swimmer who would have loved to swim the 800 instead. Did the Aussies have an 800 at their Trials or did they simply use the same swimmers from the 1500?

Answering my own question here. From this article https://swimswam.com/2017-aussie-national-cships-day3-prelims-live-recap/
“The men’s 800m freestyle is a non-Olympic event and is treated as such by the Australian World Championships selection criteria whereby no one can qualify solely for this event.” [of course this story was written before the men’s 800 free was added to the Olympic program]

There usually is but there wasn’t this year so they just took it from the 1500. The reality is that he is not depriving anyone of a swim. There ARE only 2 AUS male distance swimmers who are remotely internationally competitive; namely Horton & McLoughlin and they are both in Budapest. The other 400 swimmer, McKeon, is a 200-400 man whose never really sought to extend his distance range

Agreed. I would imagine now that the 800 is an Olympic event for men Swimming Australia will start taking it more seriously, though.

Yes, but Horton was always going to have a scheduling issue here and I think he’s justified in prioritising the 1500 given he has something to prove at World level in that event whereas he already has a Worlds bronze at 800. In future, he’s unlikely to have the clash with the 200 but it was a weak event this year in AUS & he finished top2 plus he has 4×200 relay (even though they are just making up the numbers).

I do agree, however, that he may do better in future NOT giving into the temptation to say something whenever some media bozo shoves a microphone in front of him.

Also do not be surprised if AUS “scratches” from… Read more »

I kind of don’t like this guy that much anymore

34
-2
Reply
ERVINFORTHEWIN
Reply to  Swimmer A

8
-1
Reply
swimmer
Reply to  Swimmer A

I’m sure he cares

It is wise to be selective on event lineup. But it is not wise to talk down the event you give up. This kid needs to grow up.