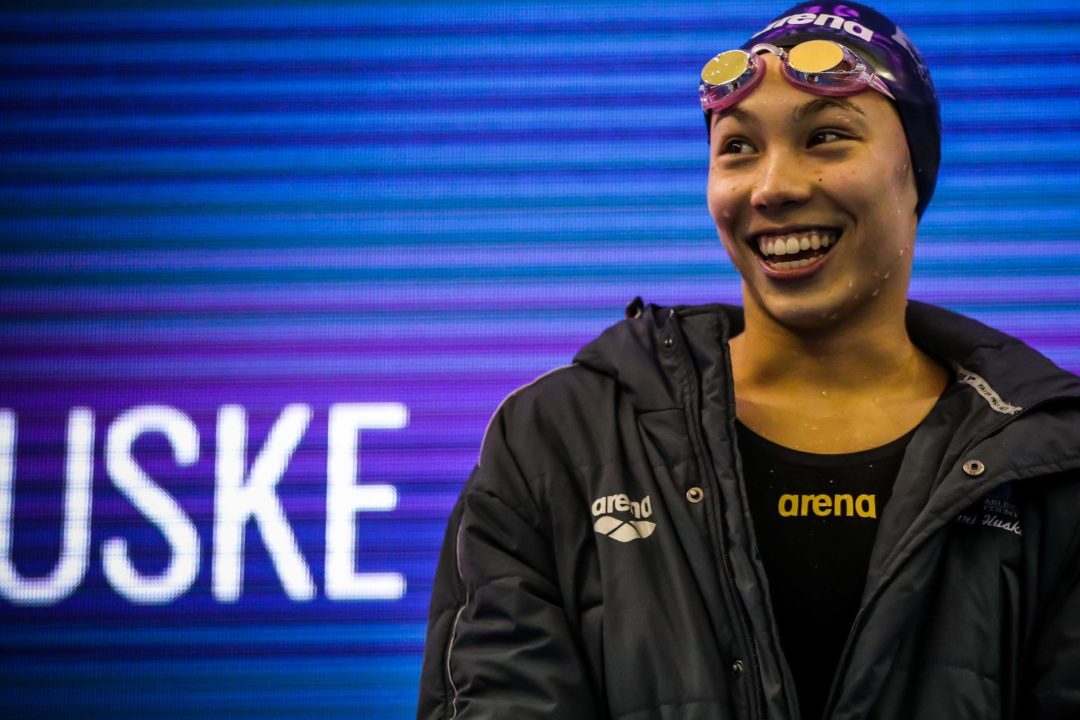 Anthony Grimm, Torri Huske and Grace Sheble are among the huge names set to compete this week in Virginia's 6A high school state meet. Archive photo via Jack Spitser/Spitser Photography

Anthony Grimm and Torri Huske are among the huge names set to compete this week in Virginia’s 6A high school state meet.

Grimm was a headliner last year at this meet, putting up what was believed to be the first-ever sub-21 in the 50 back done by a high schooler. Huske, meanwhile, set a national high school record in the 100 fly. We’ll highlight just a few of the top names to watch from the 6A meet, which runs diving on Thursday and Friday, with swimming prelims on Friday and swimming finals on Saturday.

Huske won three of her four events as a sophomore, setting two state records. She was 21.95 in the 50 free and 51.29 in the 100 fly, breaking 6A and overall Virginia state records in both. The 100 fly was actually a national high school record, both overall and for public schools. Earlier this month, North Carolina’s Claire Curzan dropped that overall high school record to 50.35. That gives Huske a new bar to challenge – she did go 50.49 back in December in club competition.

Huske is once again entered in the 50 free and 100 fly this year. Also watch for her on the medley relay (where she split 23.04 swimming fly last year) and 400 free relay (she split 47.7 last year, almost running down the eventual state champs).

Grimm stole headlines last year with a 20.87 leadoff on Oakton’s 200 medley relay. That was the fastest 50 back time we could find for a high schooler in history, and would have been one of the top few splits at the men’s NCAA Championships. The sophomore would go on to win the 50 free in 19.67 and anchored Oakton’s 200 free relay in 19.2, but had to scratch out of finals in the 100 back.

This year, the top recruit in his class nationally is entered in the 50 free and 100 breast, where he should be in line to challenge overall state records. He already holds the 50 free from last year, and Grimm’s personal best of 52.51 in the breaststroker would smash 6A (54.29) and overall Virginia (53.90) state records.

Last year, Keating set the 6A and overall state record in the 100 breast, going 1:00.26 for the win. This year, she’s already been 59.92 to break the overall state record, and will look to lower that time in a tough breaststroke field. Keating has previously been 59.0 in club competition. Keating would have been the 200 IM runner-up last year, but took a false start DQ. She’s among the favorites there, sitting second on psych sheets and looking for her first swim ever under two minutes along with redemption from last year.

Senior Oliver is already the all-time Virginia state record-holder in the 500 free. He set that mark last year in class 5A, but will compete in 6A this season. His state record is 4:23.92, but Oliver has actually been 4:21.38 in club season. He should take over the 6A state record and challenge his own overall state mark. He’ll have more of a race in the 200 free, where he’s the top seed at 1:40.33 and looking for his first sub-1:40 swim, but has top returner Lucas Johnson on his heels.

Andrew Seliskar (Thomas Jefferson HSST) won the 100 breaststroke in 2014 with a 53.24, at the time a national high school record and the current overall Virginia record.

Does Grimm play another sport in the fall?

There was an article in today’s (2/20/20) Washington Post and nothing was said about playing a fall sport, the focus was Grimm’s rebound after a stress fracture in his back – he had to remain out of the pool for two months.