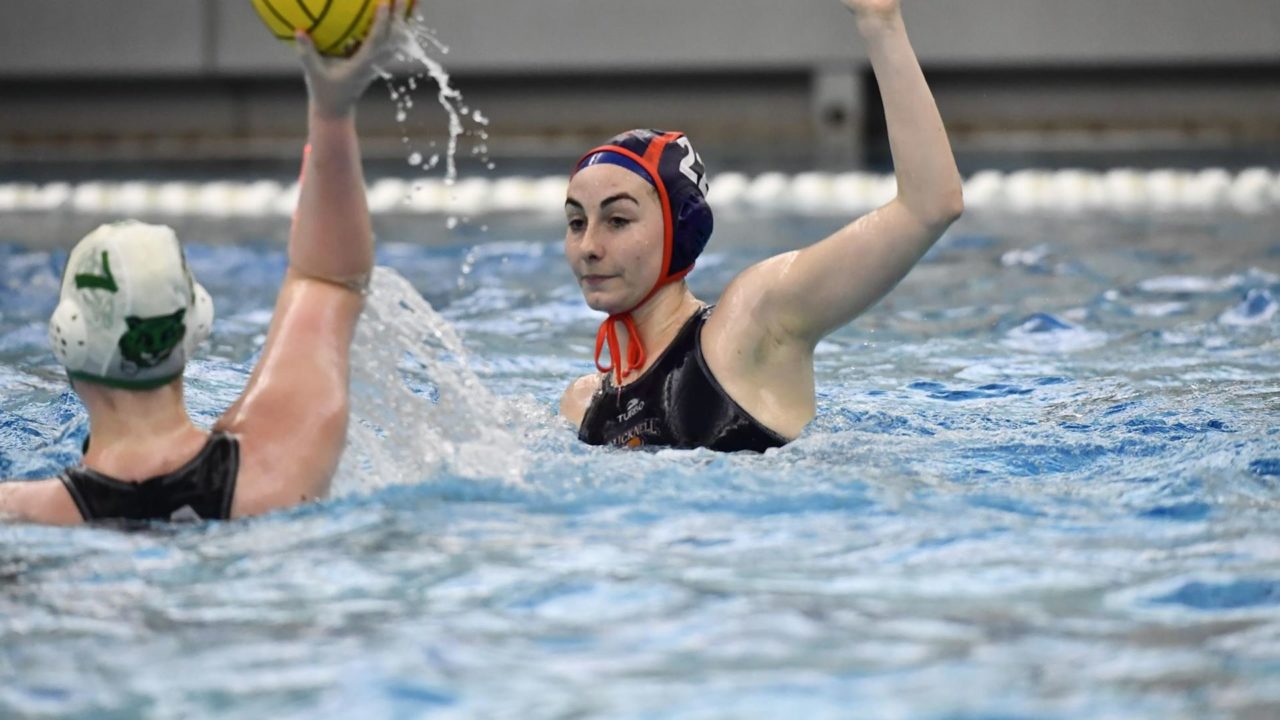 Bucknell's Kali Hyham scored 25 goals at the Mercyhurst Invitational, with five or more tallies in each of four wins, to lead Week 5 conference honorees. Current photo via Bucknell Athletics

Bucknell’s Kali Hyham scored 25 goals over the weekend at the Mercyhurst Invitational, with five or more tallies in each of four Bison victories.

Player of the Week: Kali Hyham, Bucknell – Racked up 25 goals as the Bison went 4-0 at the Mercyhurst Invitational; tallied five goals in a 14-6 win over Gannon and six in a 18-14 victory over Mercyhurst; added a career-high seven scores in a 15-7 win over McKendree; wrapped the weekend with five scores, including the game winner in an 11-10 win over Salem.

Defensive Player of the Week: Marissa Webb, Princeton – Snagged 33 saves as the Tigers went 2-1 at their own Princeton Invitational; notched 14 saves in an 11-9 loss to #17 Wagner; made 11 stops in a 7-5 win over #22 San Diego State; tallied eight saves in a 13-9 win over Long Island Brooklyn.

Rookie of the Week: Brooke Hourigan, Harvard – Accounted for four goals, three assists and six steals as the Crimson went 3-0 at the Princeton Invitational; put in one goal in a 10-8 victory over San Diego State; posted a hat trick and added an assist and three steals in a 20-6 win over St. Francis Brooklyn; tallied two assists and a steal in a 9-6 win over #17 Wagner.

Player of the Week: Paula Nieto Jasny, Fresno State – Made 31 saves and grabbed seven steals as the Bulldogs went 2-1 at the Aggie Invitational; tallied 12 saves and four steals in an 8-6 loss to #1 Stanford; made 10 stops and registered a steal in a 12-7 win over #18 Pacific; recorded nine saves and two steals in a 12-10 win over #14 UC Davis.

Defensive Player of the Week: Karle Linden, La Salle – Provided nine steals and four blocks as the Explorers went 2-2 at the Mercyhurst Invitational; tallied two blocks in an 18-15 loss to Salem; registered five steals in a 15-11 win over McKendree; tallied two assists in a 12-7 loss to Mercyhurst.

Newcomer of the Week: Danni Croteau, Siena – Posted 11 goals and one assist as the team notched four wins at the Mercyhurst Invitational; tallied four goals and added an assists in a 16-14 win over Mercyhurst; scored three times and grabbed a steal in a 17-9 win over Gannon; put in two goals in a 15-10 win over Salem; recorded two goals in a 18-14 overtime win over McKendree.

Player of the Week: Sarah Klass, Stanford – Put in five goals in a pair of wins for the Cardinal at the UC Davis Aggie Classic; scored twice and added two assists and two steals in a 17-3 win over #18 Pacific; logged a hat trick and an assist in an 8-6 over #12 Fresno State.

Offensive Athlete of the Week: Holly Kvanvig, Redlands – Notched seven goals, two assists and a steal as the Bulldogs went 1-3 at their home tournament; logged a hat trick in an 18-8 loss vs. Concordia (Irvine); put in two goals each in a 13-4 win over Ottawa (Ariz.,) and a 7-4 loss to Toronto.

Defensive Athlete of the Week: Sawyer Bellville, Whittier – Grabbed six steals to go with five goals and three assists in a 2-2 weekend at the Bulldog Invitational; recorded two goals, two assists and a steal in an 18-8 loss to Cal State Northridge; scored twice and added three steals in a 17-8 loss to Concordia (Irvine); notched a goal, an assist and two steals in a 6-5 win over Toronto.

Player of the Week: Auriel Bill, Cal State East Bay – Scored 12 goals in a pair of games for the Pioneers; logged a hat trick in a 15-13 overtime loss to Santa Clara; notched a career-high eight goals in a 13-9 win over Fresno Pacific.