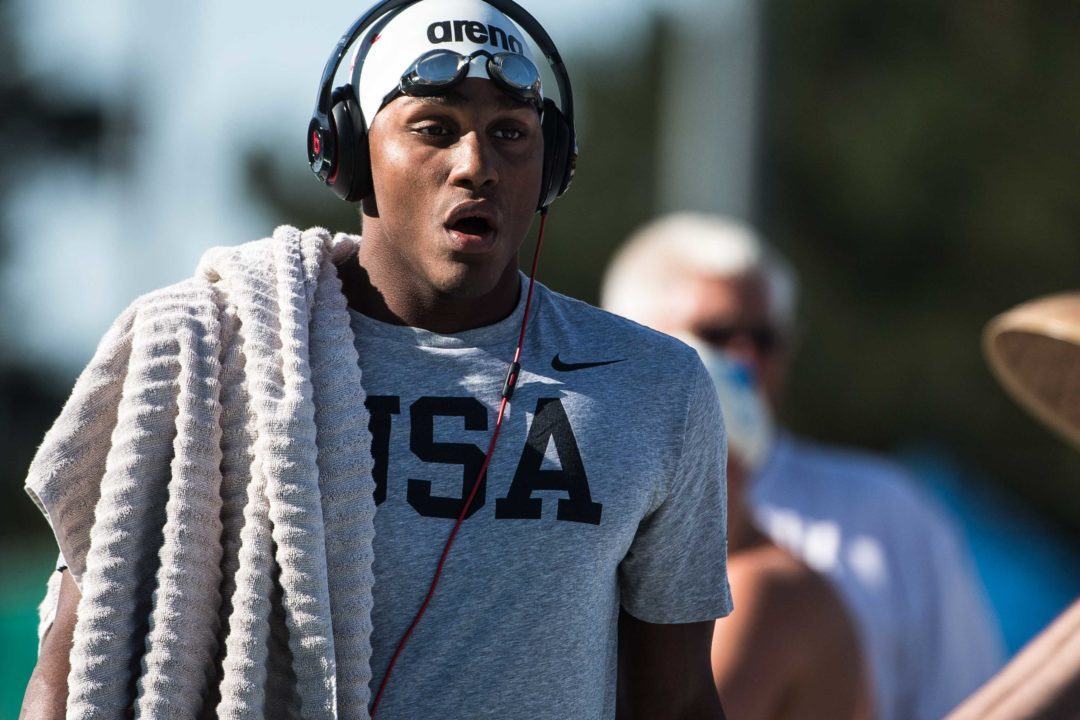 Sometimes, all it takes is a change of scenery, no matter how subtle. After 5 years-or-so training as part of the small pro group at the Phoenix Swim Club, Smith made a switch to train with the growing pro group at Arizona State University led by coach Bob Bowman. Remember that Smith swam collegiately at ASU rival school University of Arizona.

The early returns are positive for Smith, as he started off 2020 with a bang. His winning time of 52.56 marked his first win in the Pro Swim Series since 2015, and is also the fastest that he’s been in his life, unshaved.

His best time is 51.92, from an LSC Senior Championship meet in 2019; his second-best time is from the Singapore stop of the 2019 FINA World Cup Series, where he swam 52.01. That meet in August was a focus meet for him after not qualifying for any big US teams last summer.

His biggest challenge, if the goal is a 2020 Olympic Team, is that he’s in an event that is loaded for the Americans right now. If we expect that Caeleb Dressel, the World Record holder and World Champion (49.50) has one spot locked up, that leaves Smith as part of a group of over a dozen swimmers who are fighting for the 2nd spot.

The elephant in the room is 17-year old Luca Urlando, who until last week appeared to be careening toward his first Olympic Games (maybe in this 100 fly, maybe in the 200 fly, maybe as part of an 800 free relay). Now with a dislocated shoulder, he does have time to recover before Omaha, but there’s more caution.

35-year old Ryan Lochte, meanwhile, is a wildcard – in terms of what he’ll swim, and what form he’ll be in. He’s got a puncher’s chance, though.

The other swimmer who is a little bit of a wildcard here is Maxime Rooney. On paper, he’s well ahead of the rest of the field after a 50.68 last summer that was his best time by 1.6 seconds and ranked him 2nd in the world season-wide, albeit done at the US National Championships and not the World Championships. The reason this is a wildcard is that most of his 2018-2019 breakthrough was done via training at the University of Florida. While he arrived in Texas a few months before Nationals, we still don’t know what he’ll do with a full season there. It could be an Olympic medal, it could be something different. Texas has produced as many world-class 100 butterfliers in the last decade as any program on earth, though, including putting 6 swimmers in the A final of the 100 fly at the 2015 NCAA Championships.

Michael Andrew is up in the air as well. He has an almost-endless potential schedule for Trials. Among his best events, there are probably better paths to Tokyo than this 100 fly, but it’s certainly an event where he’s capable of a top 2 spot at Trials.

Beyond that, it’s all about momentum, age, and who’s going to hit their taper. Smith has momentum on his side now, although not necessarily age – Of the group listed above, only Ryan Lochte and Tom Shields (by 4 months) are older than Smith. As for hitting tapers? Bob Bowman has coached the world’s 2nd-fastest 100 butterflier in history, Michael Phelps, so that’s a tally in his column. But this list is riddled with swimmers who train under coaches who have had immense levels of success at this level.

This training group has a lot of momentum right now. Arroyo just punched his ticket to Tokyo and Schmitt just had a big swim also. I think ASU had a pretty strong midseason meet so maybe Bowman has everyone focused on swimming fast.

Is arroyo with club coach or with college team?

TAA, in the case of Giles I think it would be more of a case of him reconnecting with a coach with whom Giles has a history of success. Check this throw-back swim swam interview with Giles (https://www.youtube.com/watch?time_continue=19&v=hY0poJm3bFg&feature=emb_title) Herbie Behm (https://thesundevils.com/sports/mens-swimming-and-diving/roster/coaches/herbie-behm/3153) is a coach at ASU and undoubtably he and his yellow watch are the reason Giles is swimming great (no offense to coach Bowman, as he obviously gets the credit for seeing the talent that is Coach Herbie)

Is Herbie’s watch as fast as Wyatts? It looks like they have a good thing going.

It amazes me that Saunderson is swimming at the level that he is. Towson isn’t a bad school by any means but it’s certainly not a powerhouse and the results he’s putting up are fantastic

There are million examples that you don’t have to go with a traditional powerhouse to be successful and swim fast. The powerhouse teams fail as much as they succeed but only the successful ones get the ink

Bowman Base his training on , distance for that style uses Free as a an aerobic Base.
Giles made the right decision.

Really don’t think the second spot is up for grabs at this point. 3 months of Eddie had Rooney swimming 50.6? Imagine a whole year.

Maybe. That reminds me of when everyone trashed McKeever as a coach and then when Baker took silver in Rio it was because of training with Marsh for that summer.. Eddie might be a great fit for Rooney, but you don’t go 50.6 in the fly if you’ve only been doing things “right” for 3 months.