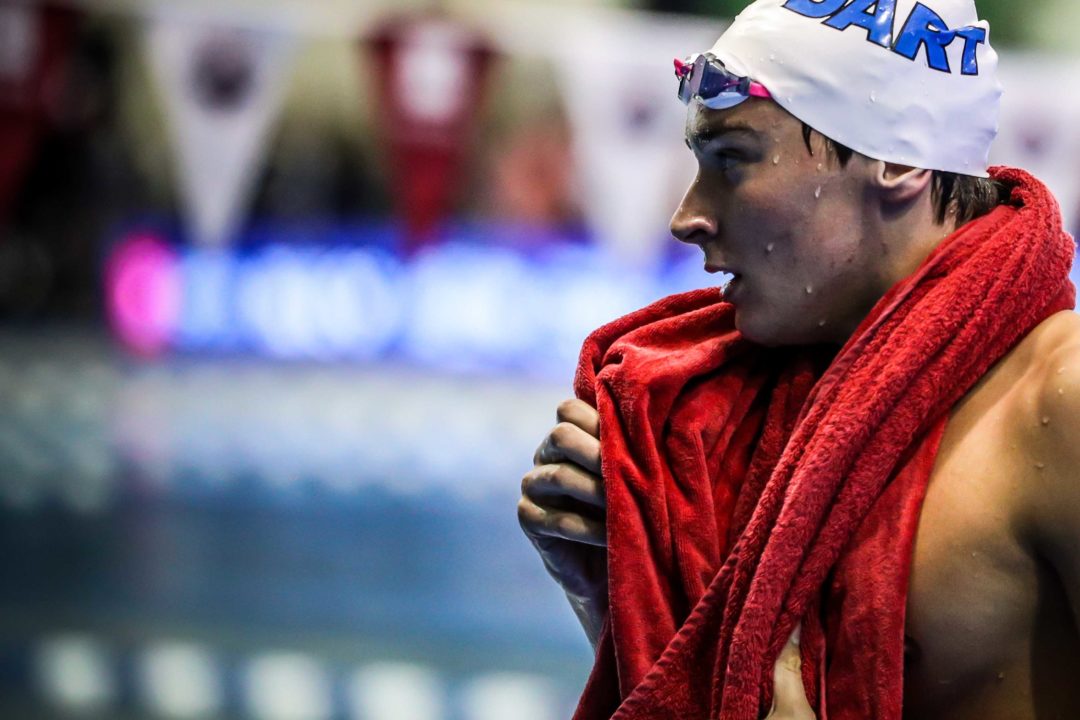 Urlando, 17, announced he disclocated his left shoulder in practice last weekend and that it will take “a couple months” to recover. Archive photo via Jack Spitser/Spitser Photography

Urlando wrote that recovery will take “a couple of months,” but that he has resources available to him at the United States Olympic Training Center that will help with the process.

“I am optimistic that I will be able to reach my goal of swimming well at Olympic Trials,” Urlando wrote.

Not the way I was hoping to start an Olympic year, but I dislocated my left shoulder during a swim workout last Saturday. Recovery will take a couple of months, but with the resources available to me in Colorado Springs I am optimistic that I will be able to reach my goal of swimming well at Olympic trials. I appreciate all the support as I focus to getting back in the pool competitively.

Urlando, 17, hails from Davis, CA. He swims club for DART and is committed to swim for the University of Georgia next fall.

In Irvine at 2018 Summer Nationals, he had a breakout meet, highlighted by a third-place finish in the 200 fly. With that swim, he qualified for the U.S. Junior Pan Pacs team. In Fiji, Urlando won gold medals in the 100 and 200 fly as well as the 400 medley and mixed medley relays.

He rode that success through early 2019, then in June at the Mel Zajac Jr. International meet, Urlando clocked a 1:54.35 lifetime best in the 200 fly — it was also the fastest time done by an American since Michael Phelps’ gold medal winning swim at the 2016 Olympic Games. He followed that swim up by breaking Phelps’ 16-year-old 17-18 national age group record with a 1:53.84 at the Pro Swim Series stop in Clovis. The performance made Urlando the third-fastest American in history, only trailing Phelps and Tyler Clary.

Urlando rounded out his individual swims with a win in the 200 fly, touching for a gold medal performance in 1:55.02.

Ouch. Poor kid. I hope he sits out this year and rehabs.

Assuming he makes it it Tokyo, he should avoid warming up in a lane with a certain international swimmer known for getting in altercations with people…

At least it’s not the worst possible timing. Good luck kid. We’re all rooting for you.

Hoping for a speedy recovery and even speedier times at trials !

Conger and Shields just woke up.

Them and a dozen other guys. Anyone that has been sub 1:58 has a least got a shot. I’m gonna say Sam P. has got to be one of those guys. Smachlo is another. Dressel could medal in this thing if he wanted out in 51 back in 1:02

The Dressel comment was just to tease Ol’Longhorn. He could probably go a 1:54 if he focused on it.

The man stole my cattle. Isn’t that enough for you?

stay away from pain killers…