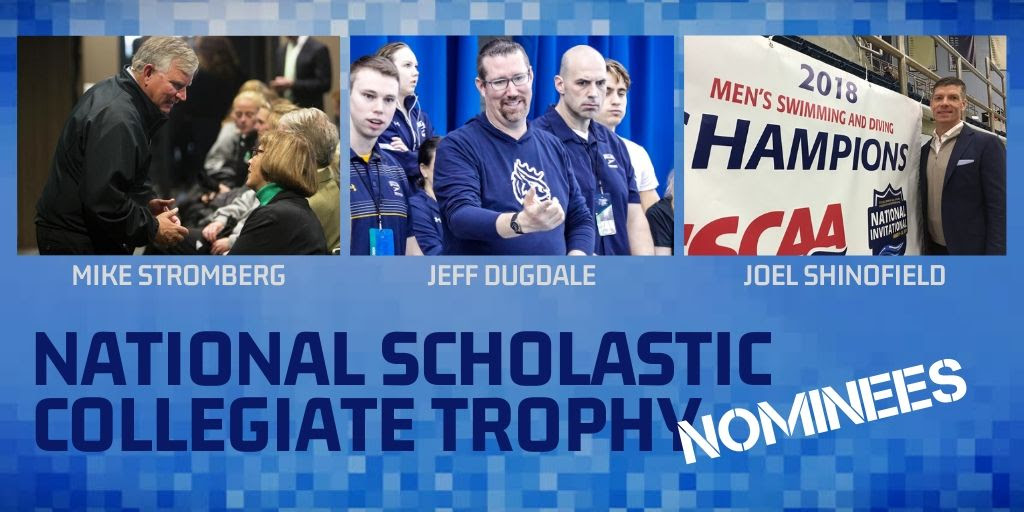 January 14, 2020 – Colorado Springs, CO – The nominees for the National Collegiate Scholastic Trophy were announced today by the College Swimming and Diving Coaches Association of America. The trophy is the highest honor in intercollegiate and interscholastic swimming and diving.

Jeff Dugdale, Joel Shinofield and Mike Stromberg are the three finalists. The winner will be selected by CSCAA member coaches and recognized at the 60th Annual CSCAA College Swimming & Diving Awards on May 5th at Joe’s Live in Rosemont, Illinois. Each of the nominees has produced multiple NCAA Champions and been named national Coach-of-the-Year eight times total.

A native of Kenosha, Wis., Dugdale joined Queens in the summer of 2010 and immediately transformed the Royals into a national power. Since the 2014-15 season, Queens has won ten NCAA Division II Swimming and Diving titles. In nominating Dugdale, Wingate head swimming coach Kirk Sanocki noted that he “has helped redefine the image of Division II swimming and diving by providing a model of success that is applicable at all levels. “

Following a decade of coaching at his alma mater, Washington & Lee University, Shinofield was named Executive Director of College Swimming and Diving Coaches Association. Under his leadership, the association grew by 25% and established two signature events – the National Invitational Championships and CSCAA Open Water Championships. During his tenure, the sport added thirty-four new men’s scholarship programs and 143 new teams overall.

Mike Stromberg, a native of Havre, Mont., spent 21 seasons as head coach at UND. In that time, he built the most successful program in North Dakota athletics. During his time, Stromberg led the women’s team on a run of seventeen-straight top-six finishes and the men’s team to fifteen consecutive top-ten finishes. Stromberg’s influence also extended into the community and his student-athletes’ lives. In his nomination of Stromberg, Bob Groseth wrote, “With all of his accomplishments, what he likes to do the most is teach swimmers how to swim faster through proper technique and training. His philosophy is to train to race, not train to train. “

About the National Scholastic Collegiate Trophy

The National Collegiate and Scholastic Swimming Trophy is presented to the coach who, in the estimation of the recipient’s peers, has “the greatest contribution to swimming as a competitive sport, and as a healthful, recreational activity in the province of undergraduate and scholastic education.” The award is presented annually by both the CSCAA and the National Interscholastic Swimming Coaches Association (NISCA).