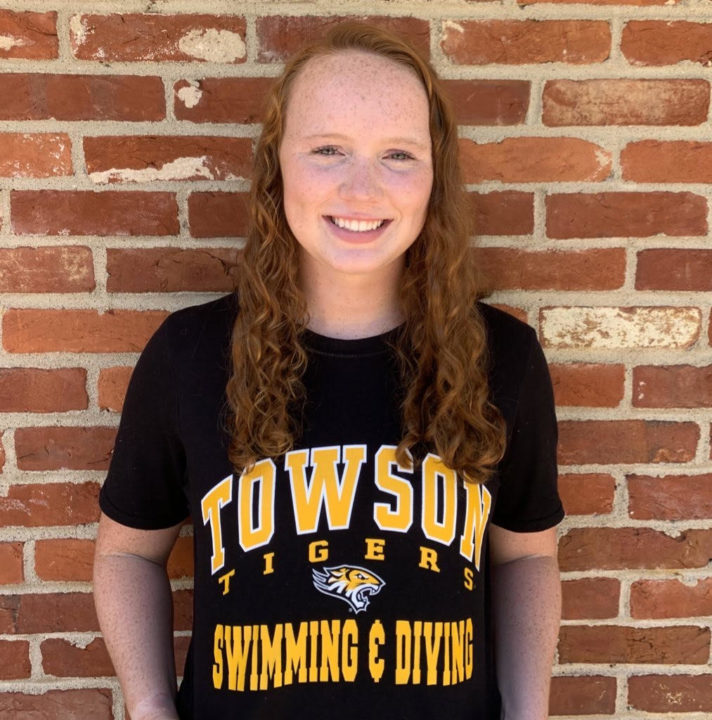 Laura Gaffney of Yorktown, VA has verbally committed to swim at Towson University beginning in the fall of 2021. Gaffney is a senior at York High School and she is a year-round swimmer at for the Coast Guard Blue Dolphins’ National Team under Coach Jack Bierie.

Super excited to announce my verbal commitment to swim at Towson University! Can’t wait to be a tiger! #TU2025 🐯🖤💛 pic.twitter.com/yeVSPvzmJS

In February, Gaffney competed at the 2020 Virginia Class 3 State Championship. The York High School junior swam the 100 fly and the 200 IM, earning a spot in the final in both events. She placed 3rd in prelims of the 200 IM and remained 3rd in finals (2:06.89). Colby Hurt of Lafayette High School took first and Athena Vanyo of Monticello High School finished second. Her prelims 100 fly time of 56.25 placed her 5th, and she touched 6th in finals (56.75). She swam the third leg of York’s 200 free relay, splitting a 50 free time of 26.36 in prelims and a 26.92 in finals. She led off their 400 free relay, going a 53.56. They touched second behind Independence High School.

Towson University will welcome Gaffney beginning in the 2021-2022 season. She will contribute to the Tigers’ strong butterfly program, which developed U.S. National Team member Jack Saunderson (class of 2018). Her 200 fly would have made her the team’s second-fastest behind Colonial Athletic Association champion  Megan Cowan. She would have been their third-fastest 200 IMer behind Cowan — who won her second 2020 conference title in the event — and Kasey Gamache.