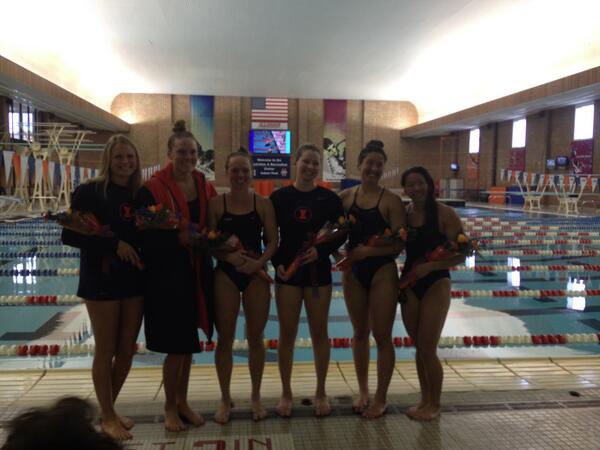 Illinois had to go 1-2 in the final relay to force a tie with their future Big Ten rivals. Above are seniors Alyssa Toland, Courtney Pope, Erica Lynn, Jessica Holz, Anne Goering and Cara Chuang, couresty of Illini Swimming. Current photo via @IlliniSwimming

The University of Illinois welcomed incoming Big Ten addition Rutgers to their home pool Friday for a mid-morning dual meet, and you could say the budding rivalry started off in the closest fashion possible.

The two teams tied in a wild back-and-forth showdown that came down to the final relay.

The Illini trailed by a whopping 13 points heading into the final 400 free relay, but Illinois put on a show for the home fans, sweeping the top two spots in the event to force a tie. The team of Alison Meng, Megan Marchuk, Gabbie Stecker and Courtney Pope won easily in 3:29.79, then watched their B team outlast Rutgers to tie the meet up.

That 100 free win for Pope came as revenge – in the last event before the first diving break, Rutgers’ Mary Moser beat Pope for the 50 free victory 24.40 to 24.80. But Pope returned in the very first event after diving to get Moser back, beating her by just .05 for the 100 free win.

Rutgers got a pair of wins from three different athletes. Greta Leberfinger was unstoppable in the breaststrokes – she went 1:04.72 in the 100 and 2:19.82 in the 200 to win both races with ease. She was also a part of Rutgers’ winning 200 medley relay effort to kick off the meet.

Lori Lynn won the 200 fly for Illinois, which won only 7 of the 16 events but still managed to tie.

In the final session of the meet, Morgan Pfaff won the 200 IM in 2:05.23 for Rutgers, and Greta Leberfinger took second, giving Rutgers a nearly-insurmountable 13 point lead with one event to go. But that was when all 8 of Illinois’ 400 free relay members stepped up for the 1-2 punch to end the meet in a tie and begin a rivalry that now has a little more added flavor for when Rutgers officially joins the Big Ten next season.