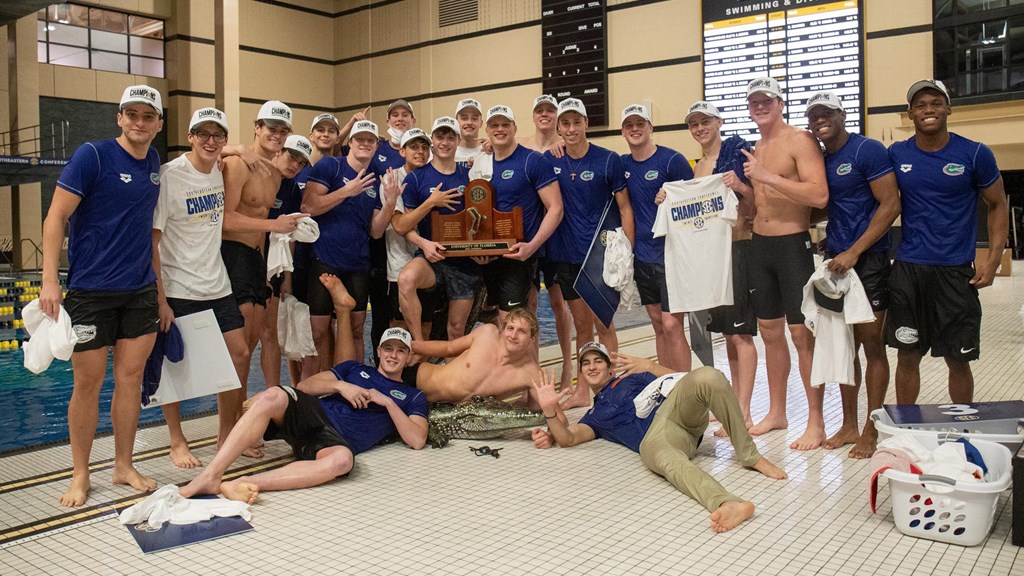 The University of Florida 9th-straight SEC Championship in men's swimming & diving highlighted a wild night around the country in college swimming. Current photo via Florida Athletics

As the wild week of conference championship meets rolls on, including at least one gender from each of the Power 5 conferences in action, here’s your cliff’s notes for what happened on Friday night around the country:

On the women’s side, the Houston Cougars built their lead to 189.5 points over SMU, though that score belies the balance in this meet that saw all four teams win at least one event on Friday. Houston’s Mykenzie Leehy won her second event, adding a 200 free victory (1:46.27) to an earlier win in the 50 free, as did her teammate Ioanna Sacha, who added a 100 back win (53.17) to a Thursday win in the 200 IM. On the men’s side, Caleb Rhodenbaugh of SMU, son of the team’s head coach, won the 100 breast in a new Pool Reocrd of 53.23. SMU appears in control of the two-team AAC men’s championship.

Youssef Ramadan took two seconds off the NCAA freshman record with a 44.32 in the 100 fly, making him about six-tenths faster than any other 18 & under has ever been in the event. Notre Dame sophomore Jack Hoagland became the meet’s first double winner by topping the 400 IM in 3:40.99 after winning the 500 free on Thursday. The meet tightened up significantly at the end of the session when, after a long delay, NC State’s 400 medley relay was disqualified when Kacper Stokowski committed a 15 meter violation. That allowed Louisville, which defended their title in that relay, to hold a 25-point lead over Virginia Tech and 65 point lead over NC State heading into the final day of competition. Virginia is virtually locked into 4th place, barring something unexpected.

The Texas Longhorns continued to roll. The big result on the men’s side was the Texas 200 free relay, which swam 1:15.76 and smacked the Big 12 Championship Record thanks in large part to an 18.58 anchor from Drew Kibler. That could have implications for his NCAA Championship lineup. Longhorn senior Alvin Jiang won the 100 fly (44.91) and 100 back (45.09), defending both titles. On the women’s side, Olivia Bray broke a 13-year old Big 12 Record with her 51.05 in the 100 fly. The old record was set by Texas A&M’s Triin Aljand in 2008. Texas is on its way to the meet title, but there’s a great fight for 2nd on the men’s side brewing between West Virginia and TCU – separated by only 8 points.

The biggest story wasn’t a fast swim, but rather a slow swim. The whole of the midwest is buzzing about Northwestern junior Miriam Guevara getting disqualified in the 100 back final after officials invoked a rarely-used “lack of effort” rule. She swam 53.10 in prelims to qualify for the A-final, and with a win likely out of reach, she swam 1:02.44 in finals. Presumably, she was saving her efforts to pursue the 200 fly win, but that didn’t pan out when Michigan junior Olivia Carter set the Big Ten Championship Record in 1:52.17. Ohio State is running away with the meet, and Michigan is securely in 2nd, leaving Indiana and Northwestern, separated by 10.5 points, to fight for 3rd. That Guevara DQ, which cost the ‘Cats 22 points, looms very large right now.

Florida International holds a 4-point lead over Rice after day 2 of the three-day Conference USA Championships as the two teams combined to win all 8 races on Friday. FIU’s Stephanie Hussey defended her title in the 400 IM in 4:19.32, albeit about three seconds slower than her win last year, and Rice sophomore Madison Howe defended her title in 53.20 – three tenths faster than she was last year. The highlight of the day was a 1:45.93 in the 200 free by Jasmine Nocentini of FIU. Depending on how much slower the NCAA cut-lines are this season than last season because of coronavirus challenges, that has an outside chance at an NCAA invite (1:45.23 last year).

Boot or no boot, Bobby Finke was ready to rock in the men’s mile on Friday. He swam a 14:12.18, just one-tenth of a second short of his NCAA Record set at this meet last year, to set Florida on a downhill role toward their 9th-straight SEC title. Texas A&M’s Shaine Casas finished his meet with an SEC Championship Record of 1:36.85 in the 200 back. Alabama freshman Matt King pulled off a win in a stacked field in the 100 free with a 41.66, and another freshman winner came in the 200 fly when Georgia’s Luca Urlando swam 1:40.93 to hold off his training partner Camden Murphy by .19 seconds. Alabama, thanks to a 41.73 King leadoff, won the 400 free relay in 3:48.22, but it was the Gators who came away with the biggest trophy, finishing 76.5 points ahead of Georgia. Tennessee held on 7.5 points ahead of Texas A&M, who in turn were just 1.5 points ahead of Alabama at the final whistle. Read about how the Gators did it here.

UNLV is dominating the WAC Championships at home, entering the final day of competition with a 185-point lead over Air Force. In spite of the scoring, Air Force had some good shots on Friday. Adam Grimm won the 400 IM in 3:49.63, Wen Zhang won the 200 free in 1:34.55, and Isaac Gwin won the 100 back in 46.36. All 3 of those swimmers are non-seniors, as is the 100 breaststroke winner Sam Willstrop from UNLV. The only senior to win an individual event on Friday was UNLV’s Bryan Chavez in 47.34. Chavez was 3rd in this race at last year’s meet, but neither of the two swimmers who finished ahead of him (incidentally both sophomores last season) are racing at this year’s meet.