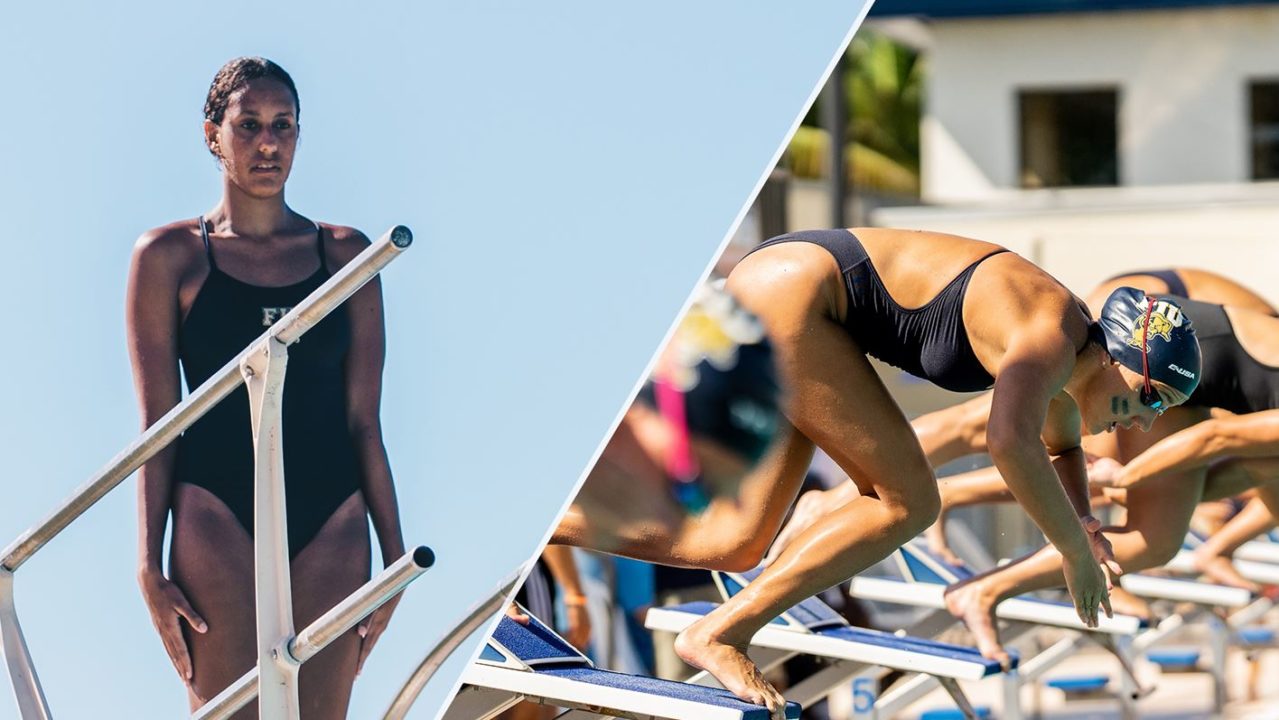 Maha Gouda's victory on 1-meter and Lamija Medosovic leading a 2-3-4 FIU finish in the 100 back earned FIU a narrow 4-point lead over Rice going into day 3. Archive photo via FIU

Florida International University has narrowly overtaken the lead in team standings after night two of the 2021 C-USA Championships. The FIU Panthers first joined the C-UCA conference during the 2014-2015 season and have won all 6 conference titles since. With one day left, Rice University is looking to disrupt their win streak as they sit in 2nd place, only 4 points behind.

FIU started off the night with a decisive victory in the 200 medley relay (1:38.81), touching the wall 2 seconds ahead of Rice. Although, Rice’s Madison Howe matched FIU’s butterflier Kelsie Campbell to the tenth of a second, as they split a 24.14 and 24.12, respectively.

In the 400IM, FIU senior and defending champion Stephanie Hussey claimed victory with a time of 4:19.32. She was the only swimmer to break the 4:20.00 mark. Rice’s Shannon Campbell touched the wall 2nd at 4:22.00, leading a 2-3 finish for the Owls, and greatly improving upon her 10th place finish last season.

There was an instance of déjà vu when defending champion Madison Howe brought Rice a win in the 100 fly (53.20), out touching FIU’s Julia Miranda by .51 seconds. At the 2020 C-USA Championships, Howe and Miranda also placed 1st and 2nd. The only difference this year is their increase in speed as Howe dropped .36 and Miranda dropped .16 from their 2020 Championship times.

FIU’s Jasmine Nocentini made sure the race for 1st in the 200 free was relatively spread out, as she finished 2.3 seconds ahead of the field with a time of 1:45.93. There was, however, an extremely close race for 2nd place between Leigh Faires McGee (North Texas), Ellery Parish (Rice), and Maggie Casey (FAU.) McGee and Parish touched the wall 2nd (1:48.17) and 3rd (1:48.18), respectively, while Casey claimed 4th about .4 after them. While Nocentini moved up 2 spots from where she placed last season, defending champion Marta Cano Minarro placed 13th (1:51.50).

In the 100 breast, FIU’s Delaine Goll won with a time of 1:01.33 and out touched teammate and defending champion Sara Gyertyanffy by one-third of a second. Goll jumped up from her 3rd place finish in the event last season.

One pivotal moment of Friday’s finals session was when Lamija Medosevic led a 2-3-4 FIU finish in the 100 back, completed by Miranda (54.67) and Kelsie Campbell (54.68). The ‘A’ final witnessed an incredibly tight race where Rice freshman Imogen Meers out touched Medosevic by .01 to claim victory. The top 4 finishers all touched the wall within one-tenth of a second.

Rice also had a total of 3 swimmers in the ‘A’ final who placed 1st, 5th (Zoe Spitz), and 6th (Mimi Filkin.) Miranda and Campbell placed 2nd and 8th, respectively, at last season’s Championships. Notably, defending champion Michaela Trnkova from FIU was disqualified during prelims after swimming a 53.82.