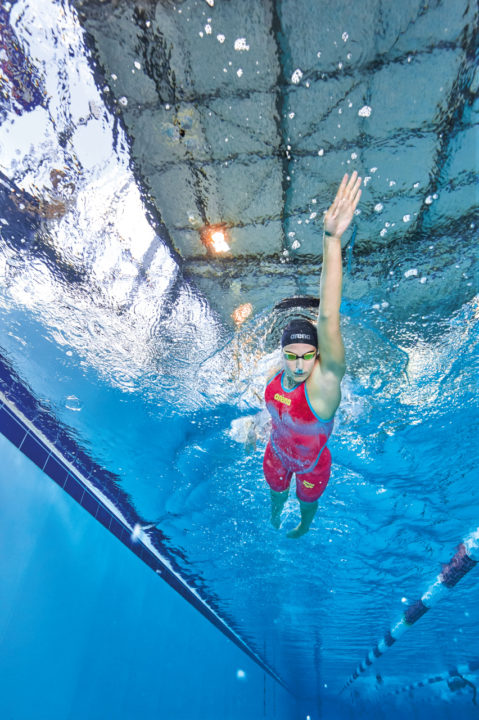 Leon Marchand and Charlotte Bonnet are among the headliners on night 1 of French Nationals and will be hoping to book their ticket to Tokyo. Current photo via Stephane Kempinaire - Philippe Millereau

Heading into the first night of finals at the 2021 French Elite Swimming Championships, swimmers are preparing to contest the men’s 400 free, 400 IM, and IM breast and the women’s 100 butterfly, 200 IM, and 1500 freestyle.

One of the biggest battles during day 1 finals will be in the men’s 400 IM where French record holder Leon Marchand will enter in third place behind top qualifier Emilien Mattenet and Jaouad Syoud. Mattenet led the way this morning with a 4:19.08 while Syoud was a 4:20.58 and Marchand a 4:20.70. If any 3 wish to qualify for the Olympics they will need to shave a few seconds off their prelim swims and hit France’s 4:15.84 qualifying cut.

In the women’s 100 butterfly Marie Wattel will enter as the top seed and has actually already qualified to race the event in Tokyo with a 57.40 earlier this season. Behind her Beryl Gastaldello and Charlotte Bonnet will be fighting for the second Olympic spot, having swum times of 59.46 and 59.63, respectively. It will take a top 2 finish and a 57.92 in order to add their names to the roster.

The men’s 400 freestyle will be full of Olympic hopefuls as several men cracked the minimum prelim qualifying time of 3:53.58. The qualifying time in the finals is a bit tougher though and it will take a 3:46.78 in order to book a ticket to Tokyo. Joris Bouchaut nearly got under 3:50 during the morning session and will enter the final as the top seed with a 3:50.84. He will be chased in the final by the likes of Tommy-Lee Camblong (3:51.59), Marc-Antoine Olivier (3:51.64), Nicolas D’Oriano (3:52.42), among others.

Adding to the action Fantine Lesaffre and Cyrielle Duhamel have set up quite a race in the 200 IM with their prelim swims of 2:13.80 and 2:13.85, respectively. Both were reasonably close during the heats to what they will need to swim tonight (2:12.56) in order to add their names to the Olympic roster.

Make sure to check back in later for live coverage of day 1 finals at French Championships to find out for yourself who will make it onto the 2021 Olympic squad.