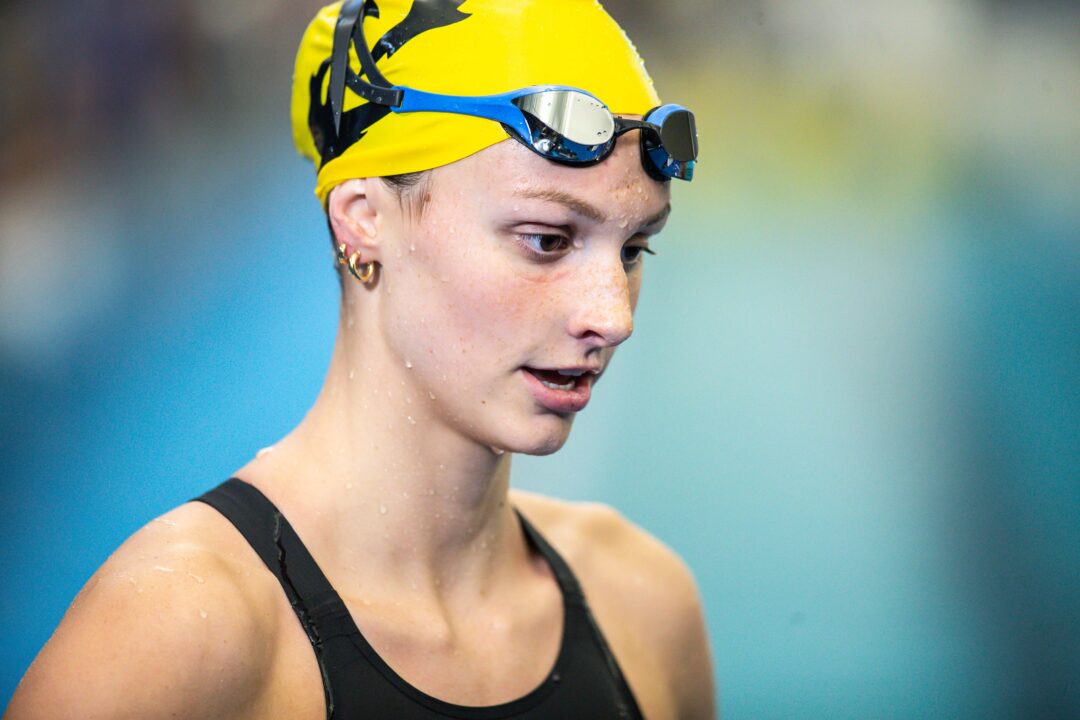 All eyes will be on Summer McIntosh in Greensboro as we see what she can do in the short course yards pool. Archive photo via Jack Spitser/Spitser Photography

Alex Shackell capped off her Winter Juniors – East meet in epic fashion on Saturday night by winning the girls’ 100 freestyle final with a time of 47.44.

15 year-old Thomas Heilman set his third National Age Group record in three days tonight with a 1:40.86 effort in the 200 fly in Greensboro.

Kaii Winkler lowered his own 100 free 15-16 NAG in prelims, blasting 42.21 to earn top seed by over a second for the last night of finals at Winter Juniors.

Just days after hosting the U.S. Open, the Greensboro Aquatic Center will welcome some of the best junior swimmers in the country this week for the 2022 Winter Junior Championships – East.

The competition will serve as the year-end target meet for many of the top age groupers on the eastern side of the U.S., while Austin, Texas will host the “West” meet.

Headlining the psych sheets in Greensboro is two-time world champion Summer McIntosh, who is coming off an impressive showing at the U.S. Open and will be one of the key swimmers to keep an eye on as she ventures into short course yards.

Below, find four key storylines to watch at the meet:

WHAT WILL MCINTOSH DO IN YARDS?

Even for her incredibly high standard, McIntosh has been on phenomenal form over the last couple of months, first beating Katie Ledecky in the 400 free (SCM) at the FINA World Cup stop in Toronto and then dropping the fourth-fastest 400 IM time in history (LCM) at the U.S. Open over the weekend.

Despite the fact she’s currently training in the U.S. with the Sarasota Sharks, McIntosh essentially comes into the meet with a blank slate in terms of short course yard best times—and could very well put up something historically fast.

Given that this will be her first full competition racing in the yards pool, it’s tough to predict she’ll come in and challenge a U.S. Open Record. With that being said, we should expect her to launch up the all-time rankings in her better events.

With the caveat that time conversions are more for context than anything else, McIntosh’s recent performances in SCM on the FINA World Cup circuit translate to the following times in SCY (with SCM in brackets):

The 200 back has become an event she’s put an increased focus on over the last few months, most recently becoming the fourth-fastest Canadian ever at the U.S. Open with a LC time of 2:07.15. If she manages to break 1:50 in Greensboro, she’ll enter the top 25 all-time in the event.

So while National Age Group Records won’t be on the line for McIntosh this week, all eyes will be on her as we see where she lands in the all-time rankings in the SCY pool.

Coming off a massive summer that included winning six medals at the Junior Pan Pacific Championships, Thomas Heilman comes into Winter Juniors riding a ton of momentum. Not only did he have a breakout long course season, he also set a new best time in the 100 breast this past weekend.

Heilman is the National Age Group Record holder for 13-14 boys in five different individual SCY events, three of which he set at this meet last year (200 free, 100 fly, 200 fly).

Heilman is entered in the 100 fly, 200 fly, 200 IM and 100 breast, and his best opportunity to get a new record will come in the fly events, though a freestyle record could also occur on a relay lead-off.

At this point in his career, Diehl is surely stronger in the long course pool, but it will be interesting to see what he’ll be able to follow up with in short course this weekend.

Diehl is also the top seed in the 200 free, where he’ll go head-to-head with Winkler, who is coming off of breaking Caeleb Dressel’s Florida high school record in the event last month.

Whether or not Winkler can bring that record down further, and maybe challenge the 200 free NAG of 1:33.33, will be something to watch, as will the clash with Diehl in the event. The two swimmers are seeded 1-2, well clear of the rest of the field.

CHARLOTTE CRUSH VYING FOR TITLES AT 14

After a standout performance at the FINA World Cup in Indianapolis, Charlotte Crush enters Winter Juniors with a chance to fight for event victories despite being four years younger than some of her competitors.

At just 14, Crush is seeded in the top five in all of her events, including being tied for the top seed in the girls’ 50 free and seeded third in both the 100 back and 100 fly.

Crush is certainly within striking distance of some of the girls’ 13-14 NAG records, especially the 50 free, where her 22.14 best time is only a quarter of a second back of Claire Curzan‘s mark of 21.89.

But beyond the record watch, Crush will be in the hunt for wins in some of the most stacked fields of the meet, with names like Alex Shackell, Kiley Wilhelm, Erika Pelaez and Berit Berglund surrounding her on the psych sheets.

After her explosion in short course meters, Crush could take the next step in SCY in Greensboro.

I have never been more invested in this meet

This meet is going to be INSANE!

Just out of curiosity if you all at swimswam have or would put together a 18U US Open record book. Would be interesting to see what it looks like relative to the NAG record books.

Does anyone know if Summer is thinking about swimming in college?

She can’t, she already went pro

even under the new rules? She may not have even gotten paid from ISL.