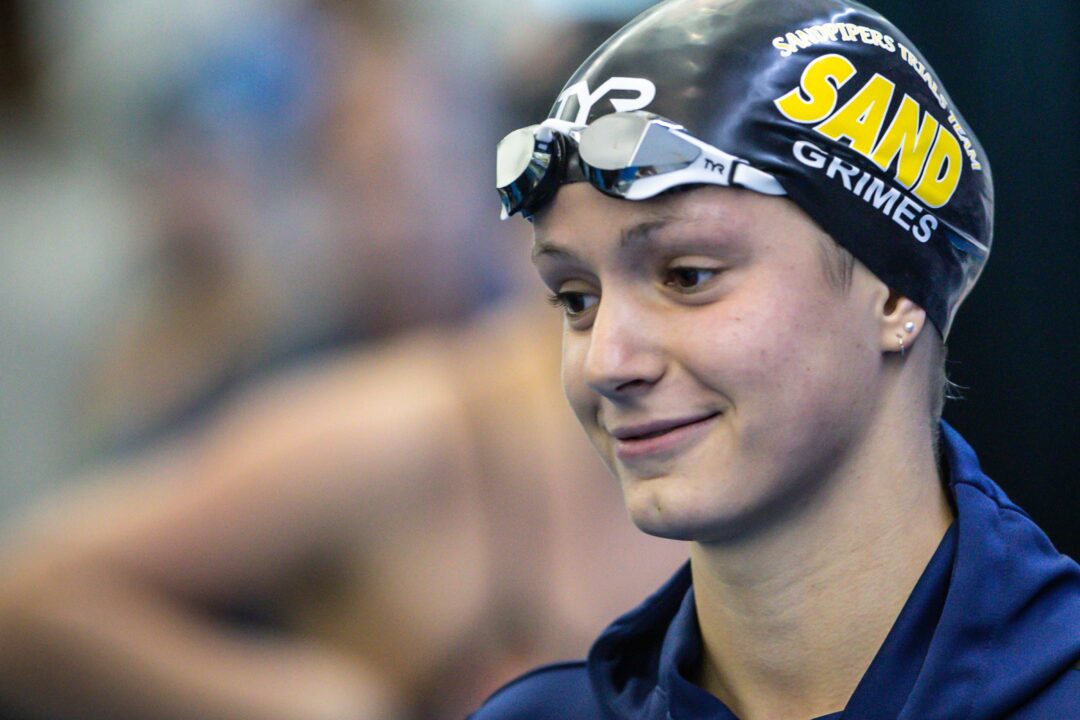 Set to age up next month, Katie Grimes will aim to etch her name in the girls' 15-16 NAG record books in Austin at the Winter Junior Championships – West. Archive photo via Jack Spitser/Spitser Photography

Jones says he will be motivated by his shortcomings in the months to come before his next big focus meet.

While swimmers based in the eastern United States will head to Greensboro, the top juniors from the west side will jet to Austin, Texas for the Winter Junior Championships – West this weekend.

Bella Sims shocked a stacked field in the women’s 100 backstroke at the FINA World Cup stop in Indianapolis last month, winning the SCM event in a new World Junior Record of 55.75—less than nine-tenths off the world record.

Sims has become well known for her freestyle abilities, but this newfound backstroke prowess came a little bit out of nowhere, and now we’ll see how she follows up that SCM success in the yards pool.

Sims is entered in six different events this weekend, which will be something to watch in terms of how she deals with the potential fatigue of quick turnarounds.

As a reigning Olympic gold medalist, Lydia Jacoby will be one of the headliners of any meet she attends, let alone one that solely consists of junior swimmers.

However, in Austin, Jacoby will only be part of the story of the girls’ breaststroke events, as she will be going head-to-head with some incredible up-and-coming talent.

Jacoby, 18, is followed by 16-year-old Piper Enge and 15-year-olds Bella Brito and Raya Mellott on the psych sheets in the 100 breast, and in the 200 breast, Enge and Mellott lead the way with Jacoby seeded down in sixth, though her new PB of 2:07.14 would put her first.

Currently in her freshman year at Texas, Jacoby is coming in on good form, having set a new 17-18 National Age Group Record in the girls’ 100 breast at the Minnesota Invite last weekend (57.54). She could challenge that mark this weekend, and could maybe even take a run at the record in the 200 (2:05.68), but part of the story in the girls’ breast events will be the names behind her.

Two key names to watch this weekend in Austin with the potential to break a National Age Group Record or two are Katie Grimes and Maximus Williamson.

While Sims and Jacoby are certainly in the hunt in the 17-18 age group, Grimes is still 16 and will take a run at the 15-16 SCY record book for likely the last time before aging up in January.

In the 1650 free, Ledecky owns the record at 15:15.17, nearly 20 seconds faster than Grimes has ever been (15:34.72), though that was also done one year ago and Grimes has surely made significant progress since then.

For Williamson, now 16, he scared the boys’ 15-16 NAG records at this meet last year despite only being 15.

How Williamson fares relative to the times Thomas Heilman puts up over in Greensboro will also be something to watch (if Heilman does swim lead-off legs in the free relays).

While the competition has several events where one or two swimmers are near-locks for the win, that’s not the case in the boys’ 50, 100 or 200 free.

All three races are not only stacked with talent, but incredibly tight at the top.

The 200 free figures to be a three-way battle between Nate Germonprez, Rex Maurer and Williamson, who are all seeded in the 1:34s.

A lot of the hype of these junior meets gets geared towards fast times and record swims, and rightly so, but we should be treated to three excellent races in the boys’ sprint frees.

Arrowhead High School senior Hailey Tierney was a revelation last month at the Girls’ WIAA Division I State Championships, roaring to a pair of best times and state titles in the sprint freestyle events.

Heading into Austin, the question then becomes if Tierney can match or better those results while facing some stiff competition.

She’s seeded well clear of the field in the 50 free, but in the 100 free, it should be a good test with Jada Scott, Teagan O’Dell and Lawson Ficken also seeded under 49 seconds.

I’m thinking O’Dell as high point. Gonna be fun to watch these fast kids this weekend!

No chance. Zero. None. Sims. Picking up where she left off at Indy.

Sandpipers will put up a time in the 800 free relay that would finish 2nd at NCAAs this year.

Psych sheets are not updated

You heard it here first:

mannnn this is just weird at this point get a hobby

it’s a little hectic, but this is their hobby lol. enjoy the free prediction stat bot

for real. I don’t think they appreciate this added pressure.

This is what swimswam is for – and prediction of times seems quite reasonable – considering why this site exists.

I don’t understand why you have to go out of your way to insult someone over a great post.

Why 20 people upvoted you is even more disturbing.

Those Sandpiper females are amazing. I would hate to be in any event with them on the blocks.

Don’t understand why you got all this dislike. Seems like very reasonable predictions

Good read! I gotta flip flop between the east and west for the next 4 days, lol.

It’s interesting to have an individual Olympic gold medalist, Jacoby, competing at Junior Nationals. I’m curious as to how often that has happened.

Its her college pool so she is not going far. I think more racing will get back into form quicker.

Could be an opportunity to test a double taper method being that she was at the Minnesota Invite recently. I don’t assume she rested fully for that or will rest fully for Jr Nats, but it could not hurt. The double taper is an art.

Definitely not saying it’s a bad thing, just couldn’t think of anyone else who had done it.

Why is Jacoby not competing at short worlds? She didn’t qualify???

King, Lazor and Dobler were all ranked ahead of her.

Amanda Beard swam the 200 IM at the ‘97 Summer Juniors in Clovis. This was one year after the Atlanta Games where she won silvers in the 100 and 200 breast and gold in the 400 medley relay. At that time you couldn’t swim events at Juniors if you had a National or Trials cut in that event .