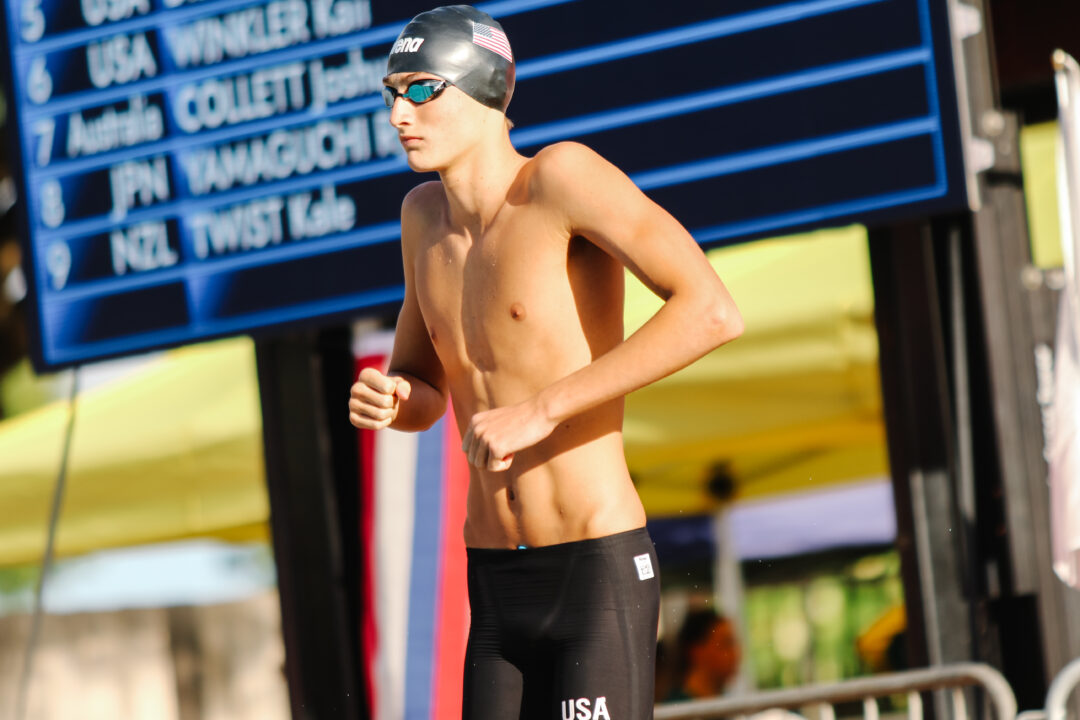 In the 100 free final, Kaii Winkler clocked a 42.52 to reset the National Age Group (NAG) record set by Ryan Hoffer in 2014. Archive photo via Jon Reiter

Kaii Winkler had quite a day at the Florida 1A High School Championships on Friday.

The homeschooled 16-year-old began the finals session by throwing down an impressive 18.98 freestyle anchor split in the boys 200-yard medley relay. Then about 10 minutes later, Winkler won the 200 freestyle with a time of 1:34.18, breaking Caeleb Dressel‘s Florida high school record of 1:34.69 from nine years ago. He shaved over a second off his previous best 1:35.41 from March.

Winkler was just getting started. In the 100 free final, he clocked a 42.52 to reset the 15-16 National Age Group (NAG) record set by Ryan Hoffer in 2014. In the process, he also broke a decade-old Florida high school record (42.95) belonging to Ryan Murphy.

Winkler is now just a couple tenths away from the national high school record of 42.34 held by David Nolan since 2011. It was his first time sub-43 as he improved upon his previous best of 43.04 from March.

Winkler is continuing his momentum from the Junior Pan Pacs in August, when he brought home a silver medal in the 50-meter freestyle and helped the 400 free relay team set a world junior record.

Winkler, who competes at the club level for Eagle Aquatics, was ranked as the No. 3 recruit in SwimSwam’s way-too-early rankings for the class of 2024.

What universities are on his radar?

Hoffer’s 41.23 is still insane i wonder if he’ll be able to get there in two years

What’s insane was he did that when he was 17

These swims these kids are throwing down are ridiculous. The group of Winkler, Maximus Williamson, Diehl, and Heilman is gonna be fun to watch through their ncaa careers

I heard a rumor they were all planning on attending the same school.

Awesome swims. How does his participation in the meet work if he is homeschooled?

In the state of florida homeschoolers can complete for any public school in their local area. In his case South Florida Heat is a team strictly limited to homeschoolers.

I had no idea that was the rule, very cool though. such a simple, elegant solution that (hopefully) benefits the student athletes experience