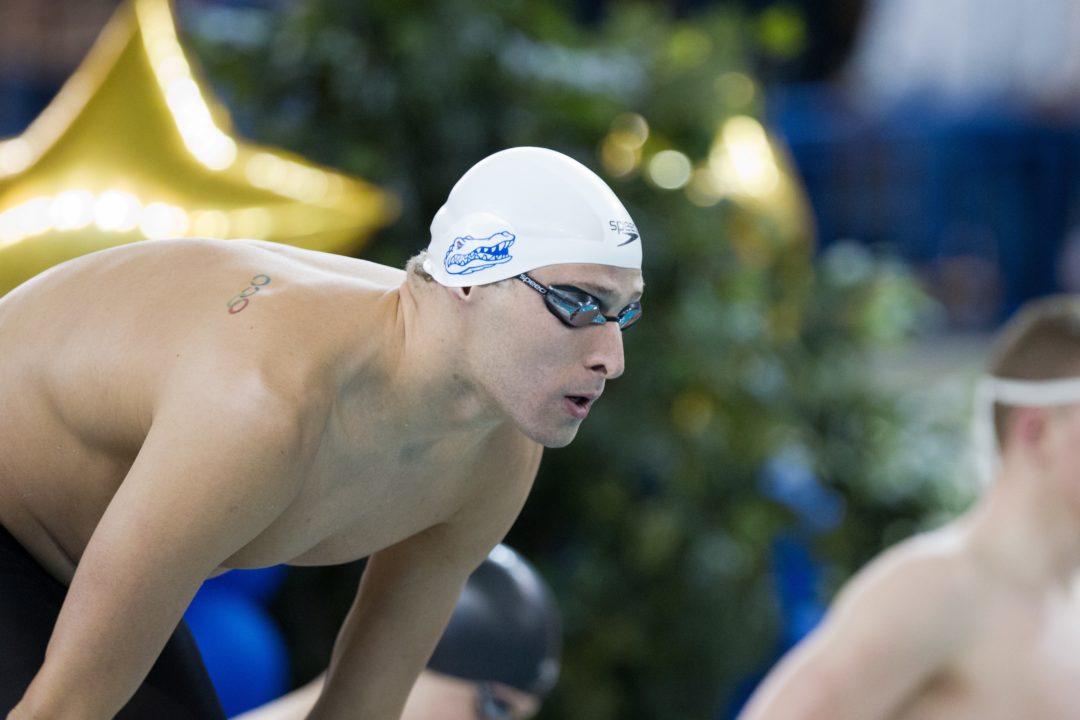 Florida's Sebastien Rousseau, top seed in the 200 IM, led a big day for the Florida men.

The Tennessee and Florida teams continued to show up with their bests, while Auburn and Georgia had some minor miscalculations with a whole lot of 9th-place finishers in prelims: significant as they don’t have much of a chance to move up in the A-finals. Auburn, in particular, rose to some extreme highs, with top seeds in two events, but also had some disappointments further down their lineups.

In both the men’s and the women’s 500 freestyle prelims, we saw swimmers who built off of outstanding swims in the 800 free relay from Tuesday to take top seeds in this individual 500.

First, it was Auburn’s Zane Grothe who went for the top spot in the men’s race with a 4:17.37, about a second better than his previous season-best. That was after a lifetime best leading off Auburn’s 800 free relay the day before. He was followed by South Carolina’s Michael Flach, who is coming off of a redshirt year, in 4:18.10. Flach pushed a lot more on his last 100 than Grothe did, indicating that Grothe is still probably the favorite in tonight’s final. Florida’s Jason Taylor was 3rd and Georgia’s Will Freeman 4th. Alabama’s first individual swim in the Dennis Pursely era was a good one, with freshman Brian Westlake making the A-final in 4:20.19.

The Georgia Bulldogs had two in the A-final, while defending NCAA Champ Martin Grodzki misjudged his early speed a little bit and finished 9th, followed by his teammate Andrew Gemmell in 10th. This was a spot where Georgia needs to make a big scoring impact to stay high in the rankings; they’ll do that somewhat with two A-finalists, three B-finalists, and one C-finalist, but they had to have been hoping for at least a third, if not a fourth, up there as well.

In the women’s race, it was Tennessee’s Lindsay Gendron who topped a field that represents some of the fastest 500 freestylers in NCAA history. Gendron was a 4:36.71 without much of a drive at the end (after a 1:42 800 free relay split) to take the top seed, followed by Texas A&M’s Sarah Henry (4:37.25) and Cammile Adams (4:38.10). The favorite in this race, regardless, of where she’s been this season, remains Georgia’s Allison Schmitt, the 400 free Olympic silver medalist; she was 4th here in 4:38.41.

The Georgia women, like their men, had two in the A-final: outshone by A&M’s three. Again, it was just a slight misjudgement of morning-heat effort when the Bulldogs went 9-10-11, with only a few tenths keeping Shannon Vreeland from bumping Florida’s Alicia Mathieu out of the A-final. The Gators will keep pace in this race with two in the A-final, three in the B, and one in the C.

In the next event, the men’s 200 IM final, there is a whole lot of swimmers that are really, really tightly bunched in the A-final, with the top 6 spots being spread by only 8-tenths of a second. That includes the top seeded Sebastien Rousseau (1:43.58) of Florida and the second-seeded Chase Kalisz (1:43.78) from Georgia. Those two represent the very different styles that we’ll see in this final. Rousseau and his teammate Marcin Cieslak (1:44.01: T-3) will both take the race out very hard, while Georgia’s Kalisz and Nic Fink (1:44.01: T-3) will try to bide time for their big breaststroke legs to catch them up.

Auburn’s lone A-finalist (as compared to a stunning four from Florida) Kyle Owens was actually the fastest to that first 100 among A-finalists. but gave it all back on a tired freestyle leg. We’ll see if he adjusts his strategy at all in the final.

Georiga’s Melanie Margalis took the top seed in the women’s 200 IM; much like her male counterparts, using a dominant breaststroke split (32.95) to do so. Florida’s Elizabeth Beisel, swimming this race instead of the 500 free, was 2nd in 1:56.15, followed by a pair of Aggies in Caroline McElhany (1:57.10) and Paige Miller (1:57.72). A&M and Florida both had three in the A-Final, while Georgia held the other two spots.

The Aggies, with three in the A-Final, two in the B-Final, and one in the C-Final, continue to show an unexpected level of depth that wasn’t ever as apparent in the much smaller Big 12 Conference meets.

This race was kind of an emotion-burner for the Auburn Tigers. At the top end, junior Marcelo Chierighini swam an 18.92, making him the first collegian since Nathan Adrian in early 2011 to go under 20 seconds. He was followed closely by Florida’s Bradley deBorde in a lifetime best of 19.15: he’s always been very good at this SEC Championship meet.

The disappointment for Auburn was that they had just one in the A-final of this race, while TJ Leon and James Disney-May were 9th-and-10th respectively. In a race as unpredictable as this 50, they would have really liked the assurances of having one more of those guys in the top 8. That eliminates most of their margin for error in tonight’s finals session if they want to run their conference streak to 17-straight.

There are 7 teams represented in this final, showing off the crazy depth. A&M was the lone team to put two up.

The Tennessee women continued to roll, with freshman Faith Johnson taking the top seed in 22.02. She was one of two freshmen in this top three, with Georgia’s Chantal van Landeghem third-best with a 22.13. In between them is Florida’s Ellese Zalewski, who single-handedly could be the key to Florida’s success this season, in 22.04.

Tennessee put two in the A-final, but Georgia got three. These freestyle events are where the Bulldogs are really going to make their money, so that’s exactly the result they needed to see.

The A&M women did as well as they could have hoped, sneaking Lili Ibanez into the A-final 8th in 22.40 and Sammie Bosma into the B-Final 16th (22.63). With two in the C-Final (including Breeja Larson in 22.95) that’s about the best they could’ve hoped for.

UF seems to be going to win the men…how about the women? did uga do enough this morning?

any news on a big 10 psych sheet? the meet starts tonight and i can’t seem to find one.

swimmer – we haven’t gotten one either. Asked around, nobody a) has one, or b) wants to share it.

James – great minds think alike. Here you are (before completion of women’s diving)

Bama didn’t have any men swim 200 IM. Don’t understand Pursley’s strategy. Maybe they are saving up?!

0
0
Reply
CoachGB
Reply to  Not that it matters...

0
0
Reply
Not that it matters...
Reply to  CoachGB

Really coach?! You answer your own question. lets face it…Bama swimming is a joke. When was the last time an American swimmer, representing Bama, was top 3 at SEC individually?!

BJ Hornikel may be “German” but he has lived in the US his whole life and grew up in South Carolina. He was 2nd last year in the 200. So I say it was 2012

There will be two ladies under 22 tonight–Natalie Hinds will be one of them.

Bold statement. Would love to see it!

Never seem to hear any of the critical words on Coach Troy at championship time like we had on threads months ago.

Bottom line is the Gators train hard and peak huge when they rest. Queue the naysayers…I mean crickets. Oh where art thou, Gator haters?

Gators win SEC then get 5th at NCAAs. They will get beat by Tex, Cal, USC, Stan and maybe Mich.