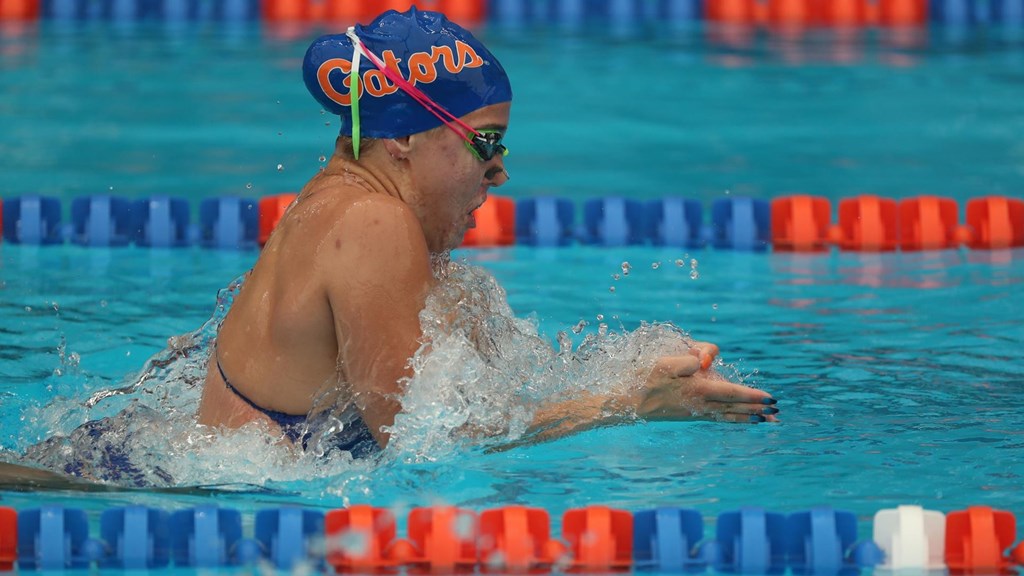 After falling last week to Georgia in their season opener, the Florida Gators came out on fire on Thursday in a dual meet with Miami.

The Florida women finished 1-2-3 in the 200 medley relay, splitting fairly even relays that were in total separated by only .36 seconds, the Gators rolled to a nearly 100-point margin over Miami, using a few late-meet exhibition swims to limit the damage.

Florida won all 12 swimming events on the day, while Miami’s powerful diving group swept the springboard events, led by sophomore Mia Vallee, who won on both 1-meter and 3-meter.

“We did use today as an opportunity to swim around some people in different events, which I think is good for them but at the same time, it gives us an opportunity to evaluate our team a little bit better,” Florida head coach Jeff Poppell said after the meet.

“We learned a lot about our individuals and I definitely feel a lot better where we are now versus where we were a week ago.”

Gator times indicated that they were in fairly heavy training, though there were still a handful of season-best times. Senior Nikki Miller, who earned her first career NCAA Championship qualification in the mile last season before those championships were canceled, swam season-bests in winning both the 200 and 500 yard freestyles.

That time in the 500 for Miller is about 2 seconds better than she was this same weekend last season, while her 200 free is similar to this time last season.

These results highlight 2020-2021 as a transition year for the Gators as the waning of the Gregg Troy era to the rising momentum of the Jeff Poppell era, with Miller leading a big group of freshmen coming up behind her in those races.

Florida is done with dual meets for the semester in this unusual truncated season, with the Auburn Invite from November 16-18 coming up to wrap their fall swimming schedule. Miami will race cross-town foes FIU in a dual meet on Monday.

GAINESVILLE, Fla. – Florida women’s swimming and diving got back on track with a 190-94 victory over in-state rival Miami on Thursday at the Ann Marie Rogers Swimming and Diving Pool inside the Stephen C. O’Connell Center.

The No. 10 Gators (1-1) would post the top effort in all 14 swimming events throughout the meet, highlighted by the top three times in five individual events.  Additionally, a total of five swimmers would notch their first victory in the Orange and Blue.

Nikki Miller and Annette Schultz led UF in the pool with their pair of individual victories in the home opener. Miller would go on to touch first in the 200 free with an effort of 1:48.15 and the 500 free with a time of 4:53.01.

Schultz earned her first career win as a Gator after winning the 100 back with an effort of 55.58, shaving .11 seconds off her swim from last week. She posted her second winning effort on the day in the 100 free by .20 seconds.

The Gators would win both relays to start and finish Thursday’s in-state battle. UF claimed the top three spots in the 200 medley relay in the first event of the dual, highlighted by the top effort of 1:43.64 by Rosie Zavaros, Cecilia Porter, Chade Nersicio and Bettina Boszormenyi.

Florida’s A-relay of Vanessa Pearl, Miller, Taylor Ault and Kirschtine Balbuena capped off the meet with the top 400 free combined time, touching in 3:27.04.

On today’s meet – “It was good. I think I said it last week after we competed with Georgia, it was the first time these ladies have competed in about eight months so we’re in a situation where we need more than anything, the opportunity to race. Even today’s competition against Miami, you saw the improvements versus a week ago. We did use today as an opportunity to swim around some people in different events, which I think is good for them but at the same time, it gives us an opportunity to evaluate our team a little bit better. Like I said, I was really pleased. We had a lot of first-time event winners. We’ve had some younger swimmers in our program a year ago, or the year before, that were kind of depth-people, maybe. We’d go to meets and they wouldn’t be people winning events. Now they’re in a situation as juniors and seniors that we’re looking upon them to win events and to be leaders, and they’re doing that…I feel like from last week’s meet to today’s meet with Miami – we learned a lot. We learned a lot about our team. We learned a lot about our individuals and I definitely feel a lot better where we are now versus where we were a week ago.”

On the challenges they’ve faced since the end of last season- “Two things. Most summers in any swimming program, you’re still competing. You’re still competing long-course meters, and no one even had that opportunity to do that, so it truly has been eight months (since anyone has raced). One of the girls swimming an event today said, ‘I haven’t swam this event in a whole year.’ It was the mid-season meet a year ago and that kind of tells you something. We had a lot of people that swam races today that wasn’t necessarily smartly swum. They got out too fast or too slow, not very good in the middle. I think that can all be chalked up to race experience. We haven’t had enough of it. Every competition to us is a valuable one because it gives us an opportunity to get that needed race experience that’s missing and that we didn’t even have the chance to do during the course of the summer months. In terms of the biggest challenges of, not just the offseason, but what we’re facing this fall when it relates to new life with COVID, it’s just team camaraderie. We can’t do anything as a team. We have to do everything in smaller groups. I think that sense of camaraderie has been really hard to generate that and create that when we’re always doing things in smaller groups and not necessarily in a full-team setting. It is what it is. Everybody is faced with the same challenge around the country right now. We’re trying to do the best job that we can to create that cohesiveness, but just doing it in a different way.”

On his group of women’s divers this season- “The group we have this year (on the women’s side) has a lot of returners from last year. We had a strong team already. They’re just one year better. I think the culture on the team is improving all the time and we added a couple on the men’s side that really helped the women’s team as well. Competing with those guys every day in practice and seeing how hard they work is motivating the girls a lot so we’re going to come back that much better (at SEC’s) this year.”

Florida improves to 29-2 all-time against the Hurricanes, winning the last 29 duals after losing the first two matchups between the programs during the 1975-76 and 1976-77 seasons.

Coach Poppell now moves to 3-0 all-time versus the in-state rival, outscoring Miami by an overall tally of 583-279.

With today’s win, Florida will end the 2020 portion of their dual meet schedule with a 1-1 mark.

Some members of the team will get back into pool with the US Open in Sarasota next week on Nov. 12-14. Swimming will wrap up on Nov. 18-20 at the Auburn Invitational.

Divers will take to the boards in the final competition of the fall at the Miami Diving Invitational on Dec. 2-4 in Coral Gables.

Florida jumps back into action at the Ann Marie Rogers Swimming and Diving Pool in their final home meet of the season on Jan. 9, 2021 against Texas A&M before wrapping up the season with their final dual of the regular season at Auburn on Jan. 23.

GAINESVILLE, Fla. – The Miami Hurricanes swimming & diving team opened its season Thursday at the Stephen C. O’Connell Center, facing off against host Florida in its first competition of the year.

Though the Hurricanes fell to the Gators, 190-94, head swimming coach Andy Kershaw and head diving coach Randy Ableman came away encouraged with the early returns.

Ableman was especially pleased with the divers’ effort given the nature of Thursday’s competition.

“I’m very proud of how we did,” Ableman said. “These competitions are exciting and tough, and as far as the diving goes, we roll in there early in the morning, have a short workout and start competing. Not a lot of time to get used to facility or anything, but I’m really proud of how we competed.”

“Mia dove consistently, showed a lot of progress in what we’ve been working on and competed really well,” Ableman said. “Millie was also a highlight. Her performance today was better than where we were when we were trying to qualify for NCAAs last March. Both showed lots of progress, and I’m really proud of them.”

On the swimming side, Miami’s top entry in the 200-yard medley relay – comprised of two freshmen, one sophomore and one senior – finished with a time of 1:46.19. Lucy Ho and Emma Sundstrand were making their collegiate debuts in the event, teamed with sophomore Isabel Traba and senior co-captain Sydney Knappp.

“We certainly had some spots where I was really proud of how the women attacked their races,” Kershaw said. “That was one of the things that we were a little more focused on today – finding the edge, finding the limit. In some cases, we did that and it worked out and led to some great swims.”

“It was good to see their willingness to go out and do it. There were a lot of really good races with the Gators,” Kershaw said. “We didn’t come out on top and do all of the things we were hoping to do going up there, but I think we came away with some good things and things to work on.”

Miami has a quick turnaround, hosting FIU in a dual meet on Mon., Nov. 9.

“We’ve made a lot of progress in a short amount of time, and we’ve got to keep moving from there. It was good to get racing again,” Kershaw said. “We have to keep sharpening the edge and we’ll get to it. It was a great opportunity to rep The U and the team did that well. Now, we’re looking forward to continuing to race.”

Katie Mack is not a freshman. She swam for NCST last year — she’s a transfer sophomore.

Good catch, thanks. Results list her as a freshman, but you’re right.