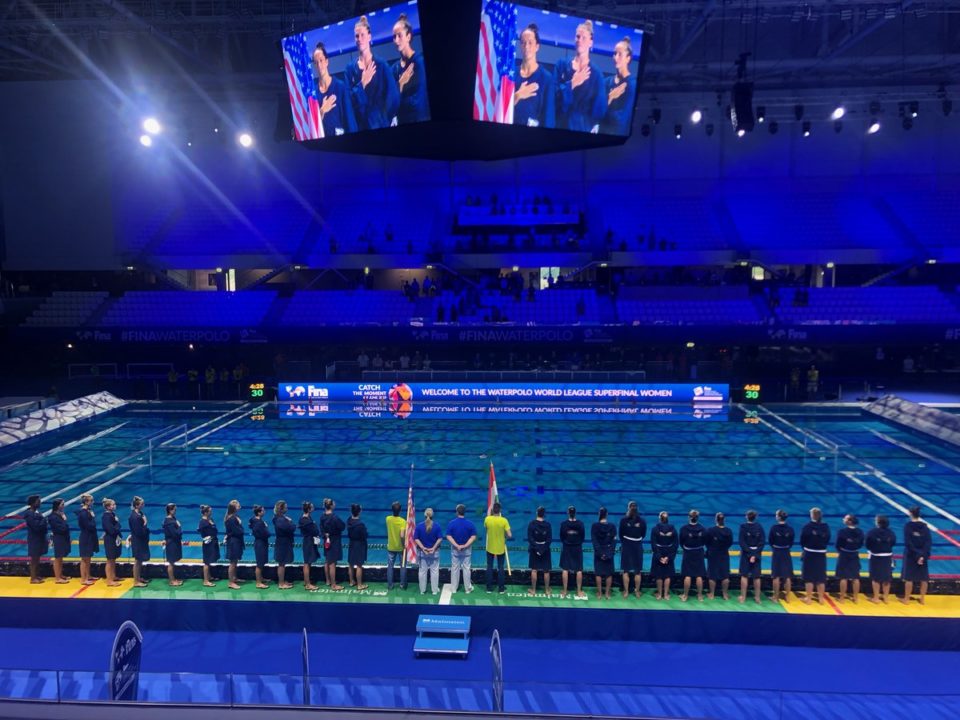 After the opening day contests, the Netherlands and Italy sit atop Group A with three points apiece, while the Americans lead Group B with three points followed by Russia's two. Current photo via USA Water Polo

World League Super Final action kicked off on Tuesday in Budapest with a shootout between Russia and Canada, and with the favorites winning each of the four opening day matchups.

The five-time defending champions from the United States, the 2018 runnerup from the Netherlands, 2018 third place finisher Russia and the 2016 Olympic silver medalists from Italy came up victorious.

Seven players netted goals for Canada, including four each by Emma Wright (who plays collegiately at Cal) and Kyra Christmas (who stars at Pacific) as well as a hat trick by Monika Eggens.

Canada boasted an 11-8 advantage after three quarters, but Russia came alive with seven goals (to Canada’s four) in the final stanza to force the penalty shootout.

Ivanova Evgeniya got things started for the Russians in the fourth, netting a goal just 24 seconds in. The teams combined for three goals in 42 seconds a little over a minute later with Marie Bersneva (6:22) and Simanovich (5:40) scoring for Russia, sandwiched around a Krystina Alogbo goal (6:07) for Canada.

Russia tied it up at 12-all with 4:02 to play on a 5-meter shot by Serzhantova and the teams traded scores from there with Canada sending the game to overtime with an Eggens powerplay score with six seconds left.

The Russians won the shootout 4-2 after missing their opening shot, to clinch two points in the standings.

“It was a very difficult start for us, and my compliments to our Canadian challengers which are very strong indeed,” Russia captain Ekaterina Prokofieva said. “To be honest, we had a lot of problems in our game both defensively and offensively, and we are going to analyze our problems now to come away with a good portion of experience after this hardly deserved win. We never gave up, which was our key to the victory, however, we realized, that our opponents could have won as well.”

Ten players got in on the scoring action for the Americans in their 2019 Super Final debut led by two goals apiece by Maddie Musselman, Stephanie Haralabidis and Makenzie Fischer.

Hungary’s Rita Kestehlyi and Dorottya Szilagyi were the top scorers in the match with four and three goals apiece.

Trailing 3-2 after one stanza, the Americans found their groove as Rachel Fattal tied it up (6:57) and Alys Williams (4:56) and Haralabidis (4:15) quickly turned the tide. Maggie Steffens tacked on a goal with 44 seconds left to put Team USA up 6-4.

The Americans outscored the host Hungarians down the stretch with Musselman (7:14), Fischer (6:44), Kiley Neushul (3:43) and Melissa Seidemann (1:54) coming through for the victors.

“It was a difficult game, and we could expect it would be so difficult,” United States coach Adam Krikorian said. “All teams in the Super Final of Budapest are very strong. For us it was the first game during 6 months with this roster, when we play together as a team. Today’s match showed that there is a long way for us to go to great results, so we will work on our shortcomings. The Hungarian team stayed competitive for quite long; they were leading in the first quarter. That confirms what I have said before — we should not underestimate our opponents, all teams are thirsty for wins and are well ready to give us a good fight.”

The Dutch went up 4-2 in the opening period and never looked back, sealing the 15-7 win with a 4-0 effort in the final stanza.

China pulled within two of the 2018 Super Final runners up at 9-7 in the third quarter, but could not break through, eventually succumbing to four more Dutch scores in the fourth. Wolves (6:40), Simone Van der Kraats (4:24), Maartje Keuning (3:44) and Ilse Koolhaas (2:49) finished off the Netherlands victory.

“This wasn’t an easy game against China, we had to work much harder from now on to get improved,” Netherlands coach Arno Havenga said. “However, tomorrow we are facing Italy, which will be an absolutely different game, a European team with top quality players. We know each other pretty well, we played against them in March in Turin at the Europa Cup. But this is a new situation, and we have to prepare for tomorrow as much as we can.

Australia boasted a 3-2 lead after the first quarter, but Italy used a five-goal second period to pull away and maintained the lead the rest of the match, hanging on for an 11-9 victory in its first World League Super Final appearance since 2016.

Arianna Garibotti logged a hat trick for Italy, while four other players turned in two-goal efforts.

The Australians jumped ahead 3-1 including two powerplay scores by Buckling (3:24, 1:40). Sivilia Avegno cut the margin to one for Italy with a goal with 24 ticks remaining in the opening stanza.

Izabella Chiappini leveled the score just 46 seconds into the second period and gave the Italians a 4-3 lead soon after (5:29). Valeria Palmieri (3:59) upped the margin to two. The teams traded goals for the remainder of the stanza leading to a 7-6 Italian advantage.

Roberta Bianconi countered for Italy (5:34, 3:21) to push the advantage to three at 11-8 to all but seal the victory. Zoe Arancini managed one final score for the Australians with just under 90 seconds to play.

“We needed time to warm up and feel the game’s flow,” Italian coach Fabio Conti said. “It’s quite habitual for our team. But as we were going into the game, we could take control over the Australians. They are pretty good swimmers, they are powerful and physically strong, but our defense was exactly how we practiced. However, with the launch of the new rules we made a bit more faults than usual, drawing a lot of exclusions, which was definitely a drawback for our game.”