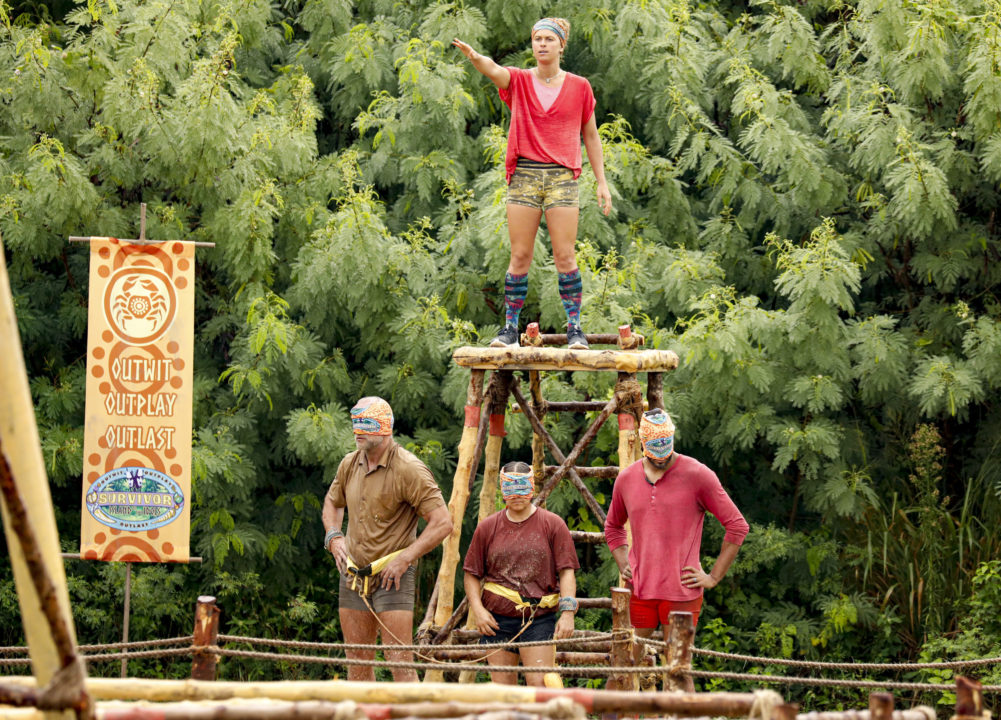 Six tribe members are walking blindfolded through a field of painfully firm objects. Who is directing them? Elizabeth Beisel, of course. Current photo via Robert Voets/CBS Entertainment 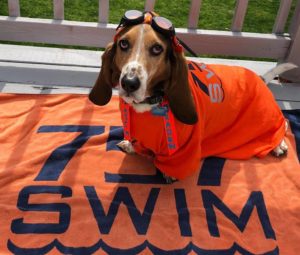 One fish, one guinea pig, one horse, three cats, 28 dogs, and one kindergartener are contending in 757swim’s March Mascot Madness in Williamsburg, Virginia.

Shouts From The Stands: Unexpected Lessons

7th grader Connor Simpkins’s experience of breaking his arm prior to his Zones meet earlier this year prepared him for dealing with the coronavirus.

Beisel’s orange tribe returns from Tribal Council after a vote-splitting move to burn an immunity idol last week. The majority targeted Vince, who was suspected of having (and did indeed have) an immunity idol, a major advantage in the game. For insurance in case Vince played the idol, negating all votes against him, the tribe split their votes between Vince and Karishma. The good news is that Vince went home with an idol in his pocket; the bad news is that the tribe telegraphed to Karishma that she’s not in the alliance long-term. 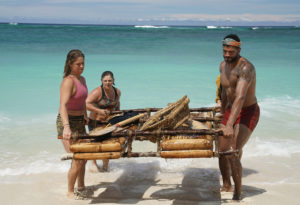 Most of the story here is a ‘showmance’ (a portmanteau for a reality show romance) between Chelsea and Dean. Showmances are usually a quick way to get one or both of you booted, stretching back at least 15 years to a season where a romantic pair effectively ran the game to the final two.

All that is to say there’s not much Beisel in this segment. She hasn’t really been heavily involved in the strategic part of the game yet… but that may be about to change.

Island of the Idols: Do we really care?

Beisel isn’t at the Island of the Idols this week, and it’s not even her tribe sending someone, so we don’t really care for the purposes of this recap. The segment is great, though, as purple tribe sends budding train wreck Noura, and she immediately jumps at the gamble. So Beisel is far from alone in losing a vote in a low-odds gamble.

Noura’s ‘challenge’ is to convince her tribe to let her be the “caller” for the upcoming challenge, a Survivor classic where most of the tribe walks blindfolded around a field full of objects at crotch-level, with one caller barking out instructions. As Rob and Sandra note, Noura would be an absolute disaster of a caller, and her tribe rightly chooses not to select her, despite her horribly convoluted lie about needing to be the caller to give the tribe early info on what the challenge is.

On the other side, Beisel takes on the high-pressure role of caller – that basically puts you in position to be the tribe’s hero, or the tribe pariah heading into Tribal Council.

This week, the castaways discover there's more to #Survivor than meets the eye. Get ready for an all-new episode on Wednesday! pic.twitter.com/ywrKILQRTG

For what it’s worth, Beisel seems to stay calm and calls out directions well. Chelsea and Dean really struggle at the art of listening, though. Watching Beisel yell “Dean, go to your right” as he repeatedly turns to the left has to feel so reminiscent of a swim coach telling his age groupers to do a 50 catchup freesytle drill and watching them take off in a multitude of strokes and styles, none of them the actual announced drill.

The tribes are getting up close and personal in tonight’s challenge. #Survivor pic.twitter.com/1tZEk3WmAZ

Whatever the cause, purple tribe gets a huge lead, and orange tribe looks dead in the water – not good for Beisel. 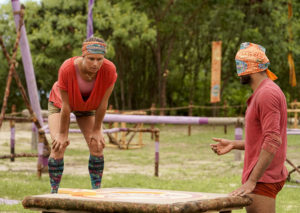 But maybe it’s fate: Beisel gets a comeback opportunity on the blindfolded puzzle. That’s right, a blindfolded puzzle. Beisel and the purple tribe’s caller, Jason, aren’t blindfolded, but have to direct a blindfolded tribemate to complete a moderately tricky circular puzzle. Purple tribe has a huge lead, but gets one piece away when Jason realizes he’s made a mistake. Beisel surges back, but makes the same mistake Jason did – she and Aaron have to backtrack on the puzzle, and purple tribe ekes out the win like a rapidly-fading 200 flyer who just manages to get to the wall before sinking like a rock.

Survivor Roulette: Everyone is at risk

It’s a brutally complicated finish to the episode, mainly because of Beisel’s former top ally, Missy, who seems determined to complicate what should be a straightforward boot of the person who will clearly flip if and when a tribe swap happens: the recently-spurned Karishma.

The tribe wants to vote Karishma. But Aaron doesn’t trust Dean. So Aaron and Missy hatch a plan to boot Dean.

This is where Beisel gets involved strategically in a big way. Showing that classic swimmer work ethic, Beisel values Dean’s contributions at camp, while Karishma hasn’t really helped the tribe. But Beisel tries to make her move subtly. She gets Elaine on board to keep Dean, then pretty much sells that back to Aaron and Missy as Elaine’s move. It’s smart, because it looks like Elaine is the one counterscheming, not Beisel.

But Missy can’t have things work simply or logically. She gets on a new train to boot Chelsea, a former tight ally in the women’s alliance that so recently looked like an unstoppable majority running the show.

All that chaos aside, Beisel gets a pretty good edit. She’s shown taking responsibility for the tribe’s loss, and her tribemates give her a lot of positive commentary in response. She’s also seen as a level-headed, even-keeled player in comparison to Missy, who seems to be a little overly-aggressive at this early stage of the game.

The ultimate outcome is exactly what Beisel foreshadows at Tribal Council: the plan they go with is the last one they talk about (or the last one they’re shown discussing). Chelsea takes the fall after committing the cardinal Survivor sin of saying she enjoys blindsides – seriously, if a player says they love blindsides, they are getting blindsided that night. It’s Survivor law.

Beisel is again on the correct side of the vote. That’s 3-for-3 so far.

The teaser shows… a tribe swap. We’ve been expecting one at about this point. The random swap almost always destroys the game of at least one person who had previously put themselves in a good situation. Beisel’s tribe is down 9-7 in overall numbers, so the odds say she’s going to wind up in a minority. Purple tribe has plenty of cracks (and one trainwreck-in-the-making), though, so things are probably going to very dynamic next week.

Voting out Karishma would’ve been a lot better for Elizabeth going into the swap but oh well.

They should have anticipated the merge and got rid of Karishma cause she is now flipping. Sometimes the most obvious move is the best one. Also this season really has a boring cast and they aren’t very good players. Apologies to Beisel but she would normally be in the middle of the pack and a forgettable player but this season she is being propped up as a leader? I think the show is about done.

This show was done about 29 seasons ago, for the record.

There are people who know what they are doing. Elizabeth is being propped up as a leader because the smart players don’t want to be the leader. I actually think they cast way more smart people than they usually do this season.

Maybe but they are boring me this season . This show formula is getting old

No hotties is the problem