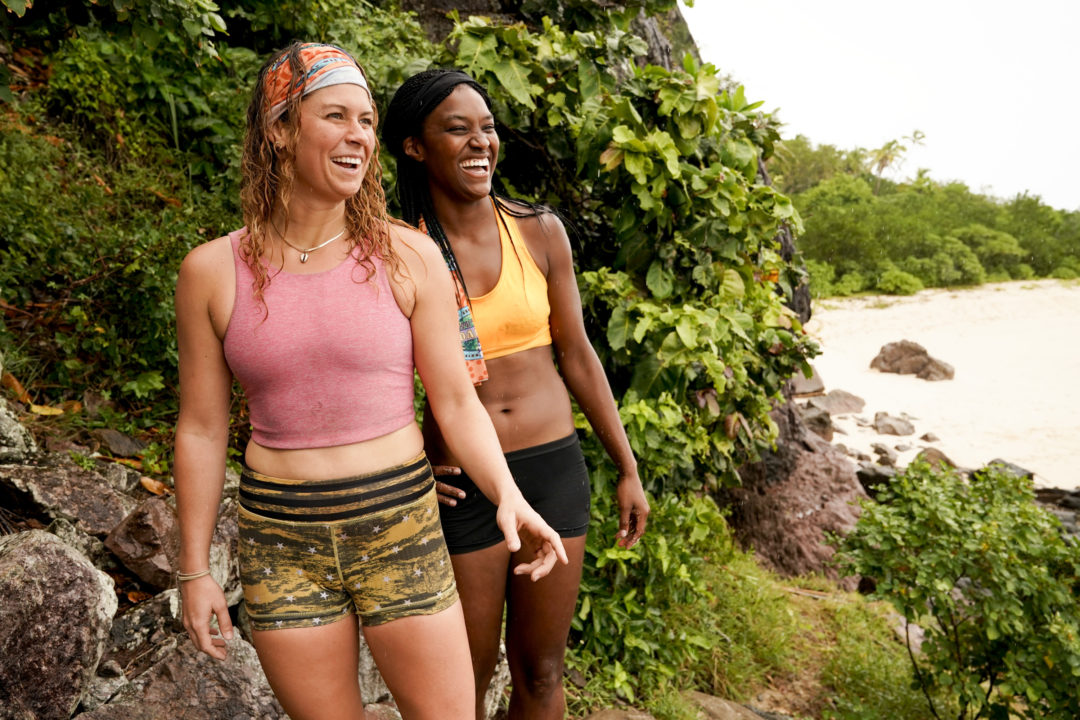 The Survivor 39 cast take to the water for their immunity/reward challenge this week, and it's time for Elizabeth Beisel to show off her skills. Archive photo via Robert Voets/CBS Entertainment 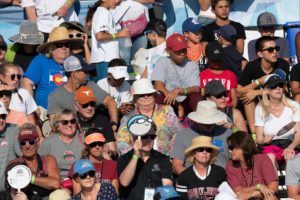 Last week, Beisel was up and down strategically, but she’s killing the .gif-ability game. What’s in store for her this week?

The orange tribe returns from Tribal Council, and gym owner Aaron is predictably pissed. He was the only one left out of the vote (and apparently the only one who wasn’t totally sketched out by professional poker player Ronnie, booted last week). Beisel gets thankfully spared from trying to ease Aaron’s feelings, but it’s good news for her that her BFF Missy immediately brings up the women’s alliance, which now has a 5-4 advantage in the tribe and remains a complete secret to the men.

Pre-Challenge Segment: Where the heck is Beisel?

Over on the purple tribe, entrepreneur Noura is going nuts. She’s feuding with law student Molly. This doesn’t really affect Beisel, but does show a nice contrast with the orange tribe, where the women are all working together and seized early control of the tribe.

(Noura is right at the threshold for tribal annoyance. If you’re irritating enough, you’ll actually go far in the game, because you’re the perfect person to bring to the end and trounce in a jury vote. But if you become too annoying to live with for 39 long days, your tribe will cut bait even despite their best interests game-wise. Noura is very close to going over the top.)

Orange tribe makes fire – a huge Survivor milestone – but Beisel is notably not present, even after learning how to make fire from the Survivor idols last week. Seems like a missed opportunity. We assume Beisel misses it because she’s out in the ocean doing day 4 of the workout list Gregg Troy sent with her to the island. Today is 9,000 meters of IM work.

Digital content creator Chelsea gets to look like the tribe hero, making fire in minutes. Things get immediately even better for Chelsea when she goes to look for firewood and stumbles upon maybe the most easily-found idol in Survivor history. The 26-year-old looks really good at this Survivor thing. Beisel could go far just trying to draft off of Chelsea.

Island of the Idols: Kellee Shows Beisel how it’s done

Beisel was the first contestant to experience the twist last week – and the consensus is that she made the wrong choice. Purple tribe’s Kellee (an MBA student and Harvard grad) is the next contestant to visit the island. Ironically enough, Kellee’s ‘test’ might have been easier for the extremely social Beisel.

Survivor winners Boston Rob and Sandra bombard Kellee with chitchat about their lives. An overwhelmed Kellee is so busy wondering what the twist is, she admittedly doesn’t listen very well. But unlike Beisel with the firemaking, Kellee doesn’t jump right into the challenge, and Rob starts to negotiate, making the challenge easier and the idol she could win more valuable.

Kellee crushes the challenge, going 3-for-3. That makes Beisel’s missteps last week feel even more costly, but it’s also fair to say the outgoing Beisel probably would have been great in a challenge about social connections and relationship building. Certainly better than fire-building against Rob, which was a challenge almost no one would win.

Kellee also lies about the Island of the Idols, though, using the same lie as Beisel. (Are Rob and Sandra suggesting that lie? Why? I thought they were good at this game?). That’s good because Beisel’s secret stays safe.

Immunity Challenge: It’s in the Water and Beisel is as Good As You’d Expect

The challenge is for both immunity and reward (spices and cooking supplies). Beisel looks as overjoyed at the prospect of food as she did to win an Olympic medal. A true swimmer.

Beisel also crushes the water portion of the challenge. She dives down and unties a ladder from the bottom of the ocean in one attempt, and she doesn’t even look out of breath. It takes purple tribe two people and significantly more time to do the same thing. On the other hand, Beisel looks like she probably rested for episode 2, and there’s no way she can swim fast now and also swim fast at Final Tribal Council.

CBS even tweeted a short video clip of Beisel’s dominance:

The pressure is on as castaways have to climb their way to victory in tomorrow's episode of #Survivor. pic.twitter.com/xxfxDMFI4S

Orange crushes the challenge, and we’ve got to give 80% of the credit to Beisel and the other 20% to the purple tribe, who were a total disaster at the water portion, especially holding up their ladder.

We’re keeping these recaps as Beisel-centric as possible, and Beisel’s tribe is done for this episode, immune and not having to vote anyone out.

Purple has a lot of back-and-forth. The easy boots would be Noura (who is annoying everyone) and Jason (who snuck off on day 1 to look for hidden immunity idols). But the strategists in the majority go hard early, mounting a counterplan and blindsiding law student Molly, who was in a power trio effectively running the purple tribe. Come a tribe swap or tribe merge, Beisel will have to watch out for players like nanny Lauren, clearly an aggressive go-getter who may be threatened by Beisel’s physical and social strengths.

The “next time on Survivor” preview teases an injury, though it doesn’t look like Beisel, and some raised stakes on the Island of the Idols. A member of Beisel’s orange tribe will visit the island again next week, and their decision will have huge impacts on Beisel’s game: if they also lie about the island, they and Beisel will have a shared secret and a reason to stay allied (or to target each other to preserve their secret). If they tell the truth… Beisel is going to have some explaining to do.

Really liking this season so far. Two great blindsides. But, I have to say Kellee’s IOI challenge was significantly easier than Beisel’s challenge was which did seem a little unfair to me.

So funny. Thanks, Jared. Water portion recap did not disappoint.

It seems like the producers are strongly influencing the people who go to IOI to lie about it so that the other contestants can have a ‘genuine’ reaction to seeing Sandra and Rob. Also, I know the recaps are focused on Beisel, but that tribal council was SO dramatic and fun to watch (mostly because Molly and Jemal’s arrogance was really getting to me so it was satisfying to see Molly get blindsided). Looking forward to next week!!

It does seem suspicious that both Kellee and Elizabeth had the same lie about the urns. I was more impressed with Kellee’s lying ability though