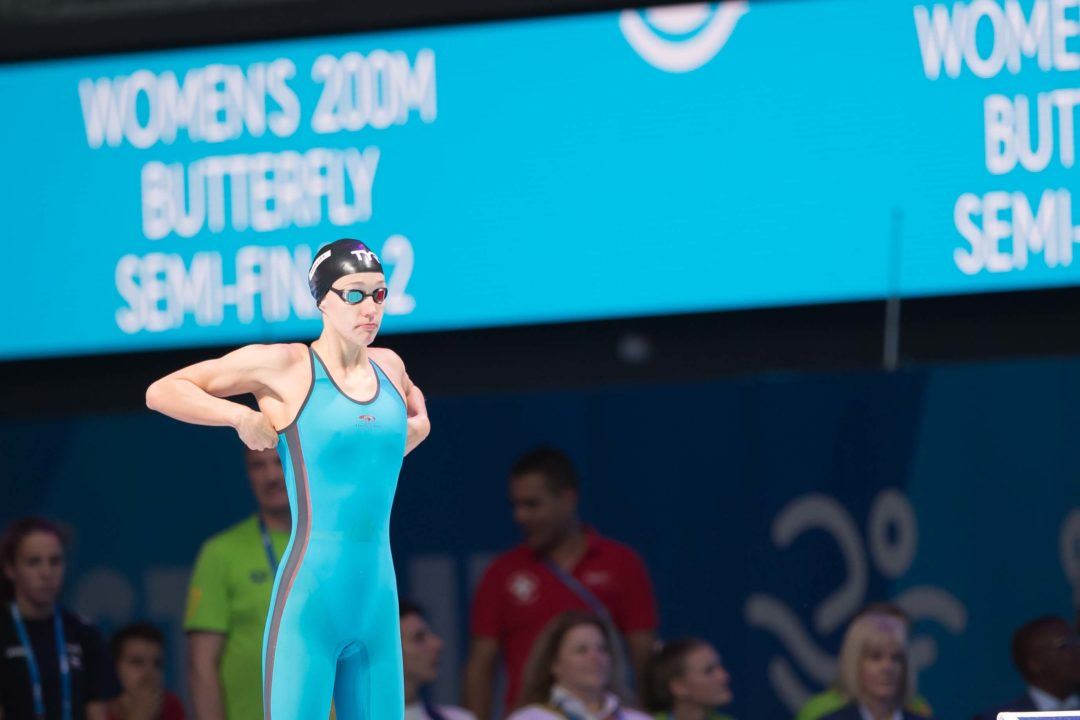 28-year-old Swansea swimmer Alys Thomas clocked a 200 fly winning time of 2:07.54 to move herself up on the list of all-time performing Brits. Archive photo via Mike Lewis/Ola Vista Photography

The final night of the Edinburgh International Swim Meet, incorporating the British National Championships, represented the last time to see British stars compete on home soil before heading out to the Gold Coast for the 2018 Commonwealth Games. Veterans and young athletes alike were in the pool to claim titles, with the junior swimmers also vying for spots on the European Junior Championships roster.

The men’s 100m butterfly saw 17-year-old Jacob Peters among the field, with the Commonwealth Games-bound teen clocking a solid 53.78 to earn bronze. Peters already made headlines this season by becoming the fastest British 17-year-old history ever in the 200m fly with his 1:57.17 silver medal performance at Swim England’s Winter Championships. He was the first Brit to finish tonight and, as such, is crowned British champion.

Of his performance, Peters said, “I’m really happy with that – it’s quite good. I’m trying to stay positive and actions speak louder than words. I’ve really enjoyed it – its been a great experience.”

In terms of actual time, it was Mt. Kelly’s Federico Brudisso who came out on top of tonight’s race. Clocking 53.40, Burdisso held off a charging Brendan Hyland from Ireland, who settled for silver in 53.74. Double Olympic silver medalist Duncan Scott was also in the race, notching a very unrested 53.85 for 4th.

The women’s 1500m freestyle also had a visiting swimmer hit the wall first, as Spaniard Mireia Belmonte easily earned the fastest effort of the field in 16:21.70, followed by countrywoman Jimena Perez who finished in 16:35.37.

Finishing 3rd in the race, but representing the fastest British swimmer, was Leeds’ Leah Crisp, who got her hand on the wall in 17:03.47. Although that falls outside the qualification time for the European Junior Championships ,the time represents the 16-year-old’s personal best in the event.

World Junior Champion Freya Anderson successfully defended her 100m freestyle 5 weeks out from the Commonwealth Games, finishing first in the A-final with a time of 55.91. That’s a unique gift for the birthday girl who turned just 17 hears of age today. She was able to out-touch runner-up Lucy Hope, who finished a fingernail behind in 55.95.

Of note, Ellie Faulkner was tonight’s women’s 100m free B-Final winner. Her time of 55.82 would have topped Anderson in the A-final.

The untouchable Adam Peaty was also on fine form tonight, claiming his 2nd title of these championships with his 50m breaststroke win. Already having scored gold in the 100m in a world-leading effort of 58.78, Peaty kicked this off this morning with a new meet record prelim time of 27.07.

The Loughborough star was just .04 shy of that mark, clocking 27.11 tonight to comfortably take the win over James Wilby who earned a silver medal-garnering time of 27.81.

“It was great to get out there and race but now it’s time to get back in Commonwealth Games mode,” said Peaty post-race.

“It was good to put a show on tonight. It was great to be against James, a fellow Loughborough boy as well, but I’m very excited to get to the holding camp now and some sun on my back.”

The women’s 200m fly saw 28-year-old Alys Thomas of Swansea take the gold in the only sub-2:10 time of the field. Nabbing 2:07.54, Thomas knocked over .3 off of her previous personal best of 2:07.87 from just last December. With her effort this evening, Thomas now checks-in as the 4th fastest British woman ever in the event. She also now sits as the 4th fastest swimmer in the world in the event so far this season.