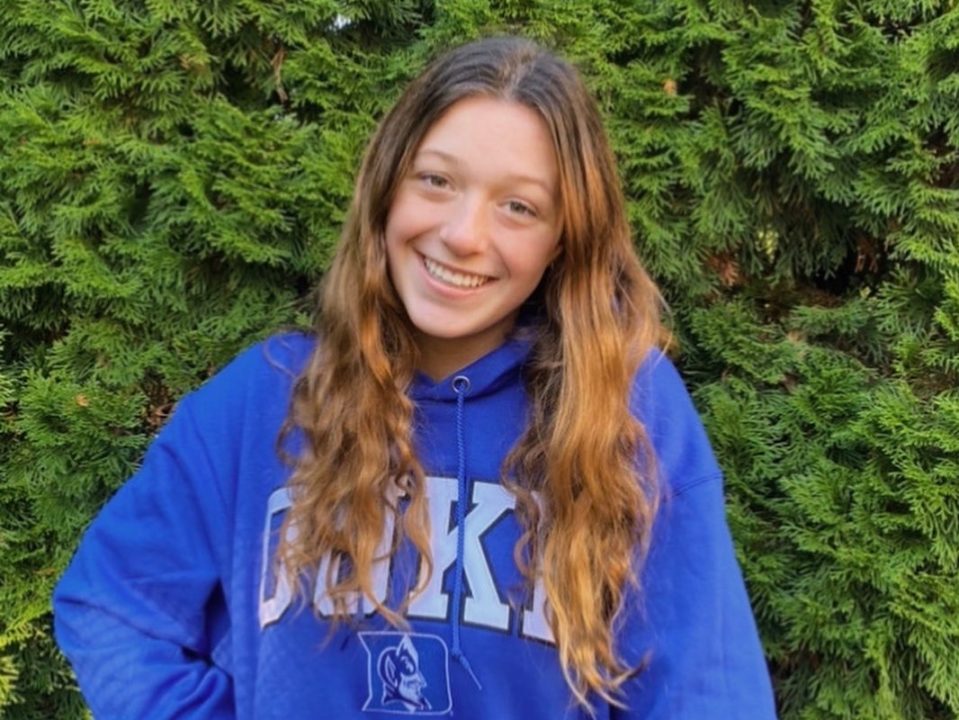 On Tuesday, the Duke swim team opened their season with a suited intrasquad meet, and one performer that stood out particularly was freshman Kaelyn Gridley. Gridley, the #15 ranked recruit and the fastest 200 breaststroker in the high school class of 2022, made her collegiate debut by clocking an eye-popping relay split as well as putting up two strong individual swims.

In the 200 medley relay, Gridley split 26.61 on breaststroke. That split is an extremely solid time for an October intrasquad meet, considering that it was faster than Sally Foley‘s 26.87 split in the 200 medley relay at ACCs. In addition, Gridley also went faster than defending NCAA 100 breast champion Kaitlyn Dobler‘s 26.86 split from the SMU Classic, which is the only other sub-27 50 breast split that has been swum this year.

Notably, Foley split a formidable 27.00 split as well on the opposing medley relay. In addition, McKenna Smith had a 22.33 freestyle anchor leg, which is just 0.17 seconds off Sarah Snyder’s 22.16 anchor at last year’s ACCs.

Gridley also swam the individual 50 breast and 150 breast, going times of 27.81 and 1:34.27 respectively. And while the 150 breast isn’t an official NCAA event, it is raced at some intrasquad meets, such as the UVA Blue-Orange intrasquad. Gridley’s 150 breast time was actually faster than the 1:34.61 that Alex Walsh went at this year’s UVA intrasquad, which is pretty impressive considering that Walsh is the third-fastest performer of all time in the 200 breast and the defending ACC champion in the same event. In addition, Gridley is also not far off of Walsh’s best 150 breast time of 1:33.45.

You can compare their splits here:

As you can see, Gridley and Walsh swam their races very differently, with Gridley pushing more in the front end of her race but Walsh closing stronger. That being said, it’s hard to jump to any definitive conclusions from this race, considering that it’s very early on in the season and Walsh swam considerably more events in her respective intrasquad compared to Gridley (Walsh had to swim the 150 fly and 300 IM prior to her 150 breast, whereas Gridley only had to swim the 50 breast). Regardless, the fact that Gridley is going faster than one of the best swimmers in the NCAA right now bodes very well for the rest of her freshman season.

The strong intrasquad performances of the Duke women indicate that they are very much living up to their pre-season momentum. In SwimSwam’s September power rankings, they were ranked #20, a jump from their 24th-place finish at NCAAs from last year. In addition, Sally Foley was named onto the list of women’s swimmers who could break out this NCAA season, following her NCAAs performances last year that earned her All-American status in two different events.

This year, Foley will be joined by the freshman duo of Gridley and Peroni. If they build up from this intrasquad and continue their strong performances throughout the season, Duke could be a team that surprises many this year.

Yeah Kaelyn making a bit of noise early. Keep it up!

It’s not a surprise team if they have the #7 Women’s recruiting class. They should be good, time will tell…🧐

Can’t emphasize enough how beneficial swimming at the IHSA state meet is….Kaelyn is a lock to have the fastest 50 breast in the 2 MR at NCAA’s

I’d be shocked if she outsplit any of Dobler, Bach, or Elendt this year. Pretending like a high school state meet is the same pressure as NCAAs is silly. Her senior year the meet was at the new FMC natatorium which is not the same cramped space the old meet used to be in. There was no state meet her junior year, and her sophomore year she was the fastest seed coming out of prelims by over 2 seconds. There isn’t a lot of pressure in that.

Dobler, Bach, and Elendt all split 25.8 last year. It’s not out of the question for Gridley to get down to that level, but it’s unlikely. I’d also bet money that all 3 will be even faster this year. As a frame of reference, Lilly King’s best split at NCAAs was a 25.38, and she split 26.0 as a freshman

Gridley won the 100 breast by 1.2 sec last year and was 3.1 faster than 3rd place. The state meet is fun, but not much of challenge for the top swimmers in the state.

If not pressure competitively, I would say pressure from expectations is relevant here and will serve Kaelyn well!

Eh maybe on the men’s side it’s a lot more competitive in most events. But on the women’s side certain events are owned by 1 person and it’s by a lot.